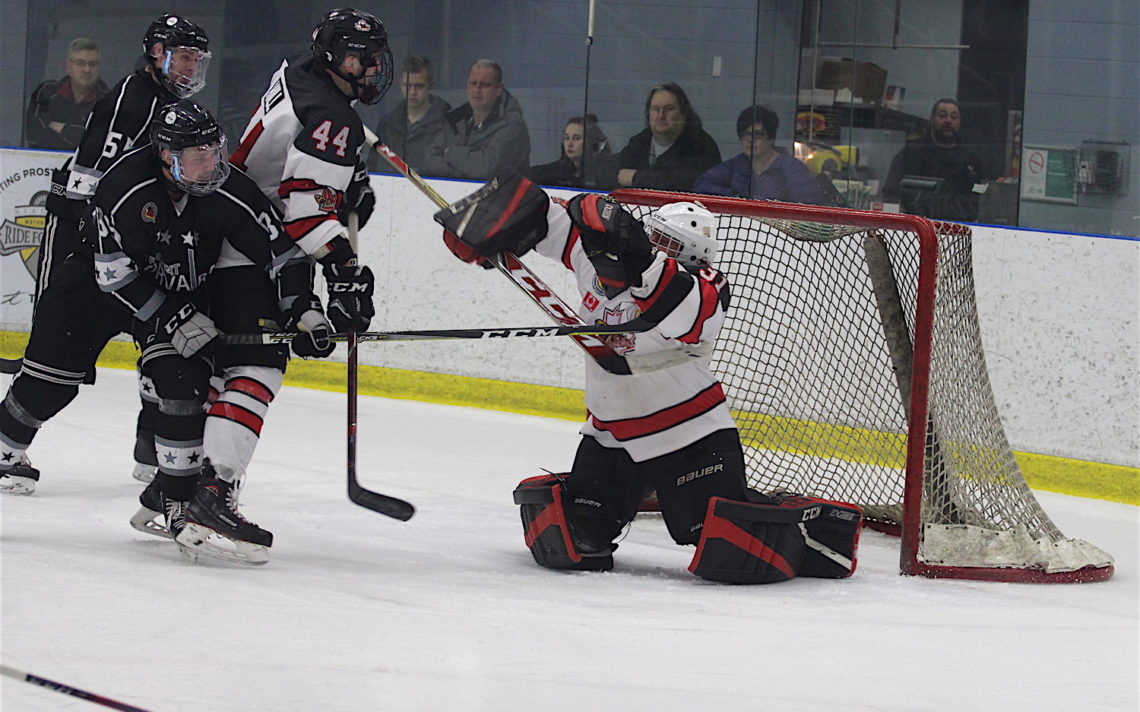 Canucks sniper not giving up

The end of Hayden Broomhead’s junior hockey career is near, but it’s the last thing the 21-year-old Ilderton native wants to talk about.

“That’s not in my head at all,” the Niagara Falls Canucks forward said Friday night, after his team dropped a 4-2 decision to the Caledonia Corvairs in Game 2 of a Greater Ontario Junior Hockey League, Golden Horseshoe Conference semifinal playoff series. The Corvairs lead the series 2-0.

The six foot, 185-pounder has done all he can to prolong the playoff life of the Canucks. With an assist Friday night, the forward has nine goals and 12 points in six playoff games.

Broomhead had 13 goals and 21 points in 16 regular season games with the St. Catharines Falcons before he was acquired by the Canucks. With the Canucks, he had 14 goals and 31 points in 32 games. 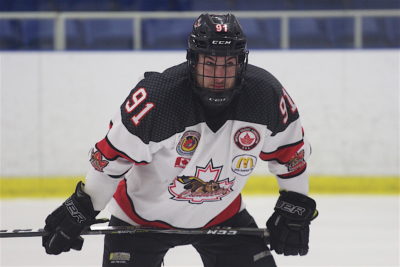 “It has been a really good experience,” he said. “I was happy to come here because it’s a really good organization and the guys here were very welcoming.

“I’ve made great friendships and hoping that we can keep going with these playoffs and keep fighting.”

He was a little surprised to be traded from the Falcons considering his hot start, but he knows that kind of stuff happens in hockey.

“Getting traded or being on the trade block is surprising and can be out of the blue but everything happens for a reason and I couldn’t be happier where I am now.”

Broomhead has looked for happiness in a number of hockey locations. He had 34 goals and 78 points with the Stratford Cullitons in the 2015-16 season and was named a First Team All-Star in the Midwestern Division of the GOJHL before deciding to play for the Amarillo (Texas) Bulls of the North American Hockey League. He suited up for 26 games in Texas before returning to Stratford.

“It was for a new experience, first and foremost, and to get a chance to see the other leagues across North America,” he said. “It was to develop in hockey and then come back and play close to home.” 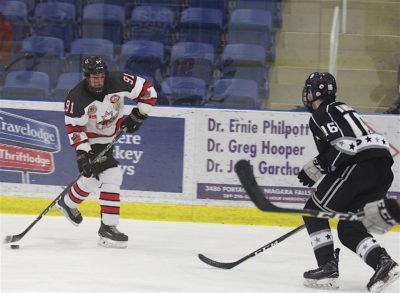 Broomhead, a Brock University student, would love to continue playing hockey at a high level next year.

“From Texas to Stratford to St. Catharines and here, I have been trying to work on my D zone, evolve it from there and move my game forward,” he said. “I feel like I’ve done that and I want to keep on that track.”

One thing he has never had an issue with his putting the puck in the net.

“You have to keep working hard, trust the guys around you, get pucks on net and good things will happen.”

Good things have happened for the Canucks since Broomhead arrived.

“He’s a great hockey player and he has been tremendous for us,” Canucks head coach Frank Pietrangelo said. “He’s a hard worker, a good kid, has great hands and he has been a really good compliment to Frankie Pucci.”

Pietrangelo believes Broomhead could play at a higher level.

“He has got terrific hands, has a great work ethic and is a great learner and listener,” he said. “He has scored everywhere he has been.”

Some coaches might question his skating ability at the next level, but Pietrangelo feels Broomhead’s hands and hockey IQ make up for that.

On Friday night at the Gale Centre, the Canucks led 2-1 going into the third period before the Corvairs rallied to remain unbeaten in the playoffs.

“I think we played very well and it didn’t go in our favour at the end,” Broomhead said. “It was a little frustrating but we have to look forward to tomorrow night and steal one in their barn.”

He agrees Caledonia is a strong team, but they’re not unbeatable.

“They are a good team, I will give them that, but I believe in our guys and I believe we got what it takes to win this series,” he said. “That’s the mindset we are going into tomorrow night’s game with.”

“We probably deserved a better fate, but we lost,” Pietrangelo said.

Niagara Falls did a great job of limiting Caledonia’s chances.

“We tried to take away their speed and be solid defensively — we’re not going to score seven or eight goals against these games — and I think for the most part we did,” Pietrangelo said.

“We had a couple guys tossed, we ran a short bench in the third period and they a good hockey team and they capitalized on those opportunities.”

BPSN Star of the Game: Niagara Falls’ Frank Pucci with a goal and an assist