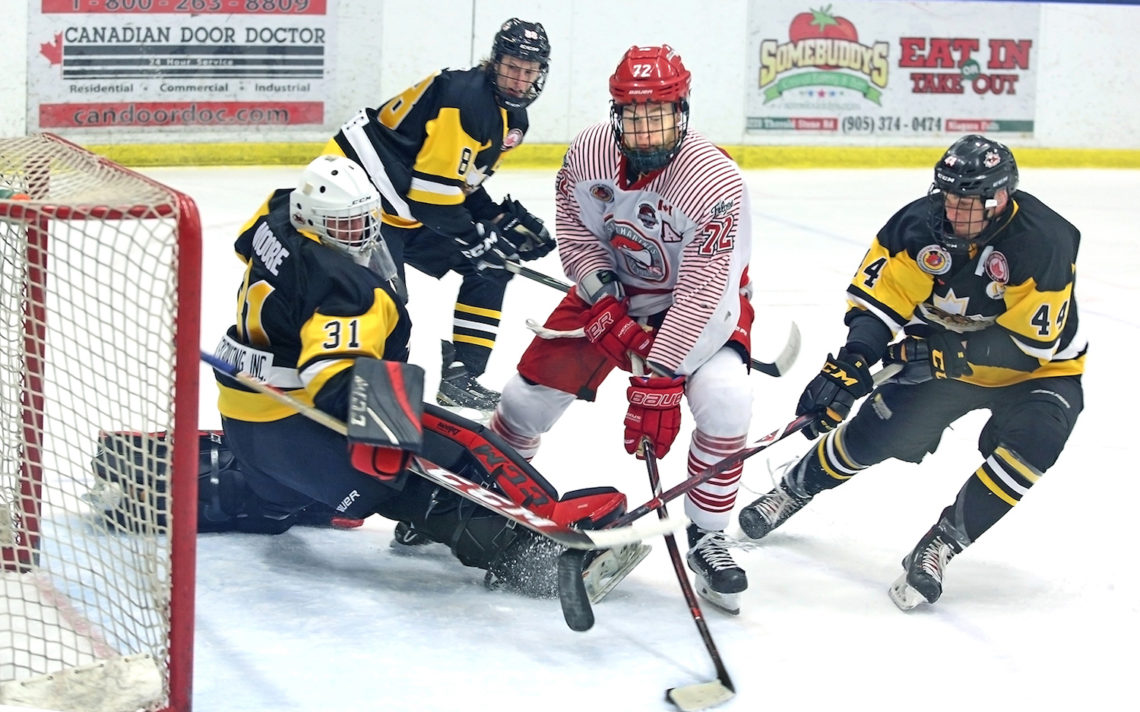 Jaleel Adams continues to show significant progress is his rookie season with the St. Catharines Falcons.

The 17-year-old Beamsville native turned in one of his best performances of the season Sunday and the timing couldn’t be better.

Adams fired a pair of goals to lead the Falcons past the Niagara Falls Canucks 3-2 in a Greater Ontario Junior Hockey League, Golden Horseshoe Conference game at the Gale Centre.

It was an important win for the Falcons who also defeated the Canucks 4-1 at home Friday and now lead Niagara Falls by three points for third place with a pair of games in hand.

Adams has 11 goals and 25 points in 36 games while also working on the defensive aspects of his game.

“He’s come a long, long way,” Falcons coach Dan Fitzgerald said of Adams. “He was a superstar in minor hockey, a really good player in midget, and some guys come in and think it’s just going to be that easy.

“He’s added things to his game off the puck that allow him to be successful.”

Fitzgerald is impressed with Adams’ attention to detail in his own end.

“He just works, works, works. He scored that second goal but it was the same amount of work he put in on the backcheck. It’s things like that can change games. Good for him. He was rewarded with two goals, but he stopped two goals as well.”

Adams emerged from the Falcons dressing room wearing a white construction hat, given to him by his teammates for strong performance.

“It’s awesome. It reminds me of how hard I’m working and how hard my teammates are working for me,” Adams said. “It’s a good reminder how well we’re working together.”

Adams, who was selected in second round (25th overall) by Niagara IceDogs in 2017 Ontario Hockey League U-18 Priority Draft, was thrilled to be able to contribute to such an important victory.

“It feels good. When we’re all working together, it just makes me happy,” he said.

Adams is proud of his progress.

“I think I’ve played my game the whole year but now I’m working harder,” he said.

Niagara Falls jumped out to an early lead the first period when former Noah Boman scored on a two-man breakaway after converting a nice pass from Justin Kyle. The Falcons tied the scored in the final minute when Michael Davies scored on a nice individual effort.

The Falcons outshot the Canucks 12-8.

St. Catharines grabbed a 2-1 lead early in the second when Adams pounced on a rebound for his 10th of the season. The Canucks answered back with just under seven minutes to play when Dillon Hill’s shot from the point floated past a screened Owen Savory.

Adams then netted the winner three minutes into the third.

Fitzgerald liked a lot of what he saw from his squad.

“We like to keep things to the outside and defend from the dots, especially on the bigger ice surface,” he said. “For us, it was key to keep their chances to as few as possible and we capitalized on ours.”

Fitzgerald is encouraged to see the club climb past the Canucks in the standings, but isn’t losing any sleep over where the Falcons sit right now.

“We’re aware of the standings but we just want to take care of things every single night. If we do our job on a daily basis — that means practice and games — we’re going to be in the right spot at the start of playoffs.”

“We had 19 shots and we just didn’t get enough pucks to the net,” he said. “They don’t give up many goals. You have to put everything at the net and get traffic and deflections and we didn’t do a good enough job of that. We got two goals today and one Friday. You’re not going to win a lot of games with one or two goals.”

Falcon facts: Kyle West (upper body) and Zach Lawrence (suspension) did not dress for the Falcons . . . Tanner Ferreira, Owen Green and Garrett Downie were scratched for the Canucks with injuries . . . The Falcons will make up their home game versus Buffalo from last week which was postponed due to the weather on Monday, Feb. 12 . . . The Falcons called their time out in the first period following a penalty kill.

Blair Jenkins, Mitch Britton and Mason Howard scored in the third as the Thorold Blackhawks rallied past the Welland Junior Canadians Sunday night in Welland.

Noah Bollert and Matthew Giannini scored for Welland in the second.

The Caledonia Corvairs cruised past the Pelham Panthers Sunday afternoon at Pelham.

Pelham’s goal came from Chad Maurice late in the third.

BPSN Star of the Game: St. Catharines forward Jaleel Adams with a pair of goals.

Up next: The Falcons welcome the Caledonia Corvairs Tuesday.