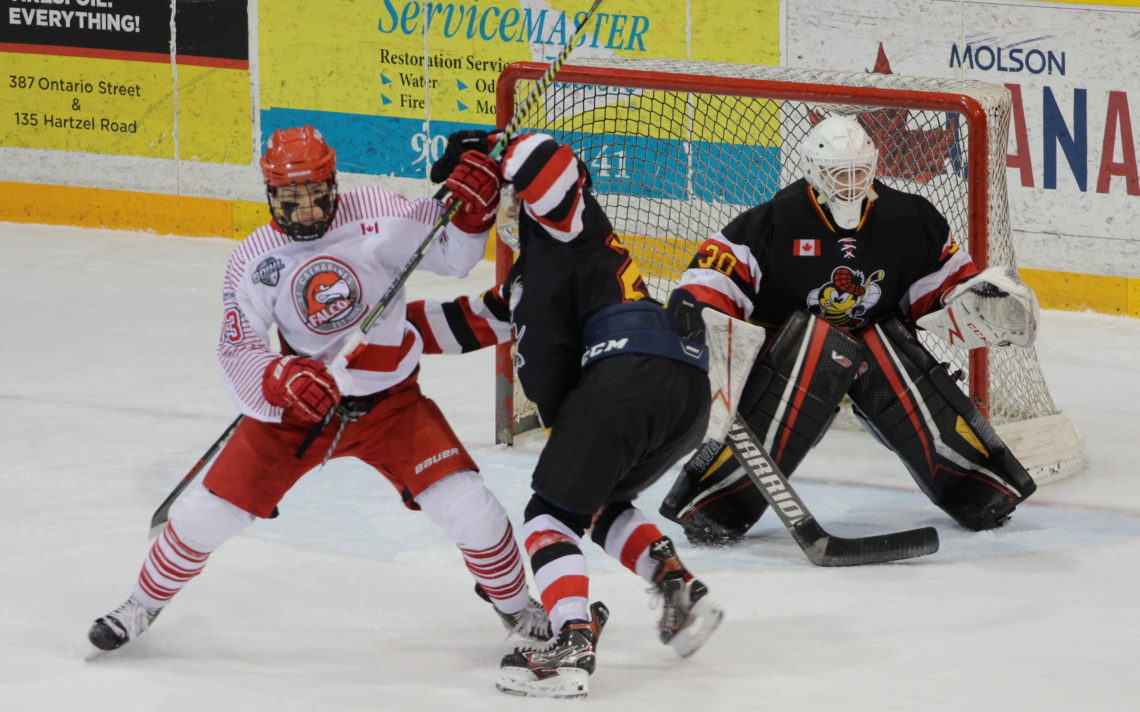 Logan O’Flanagan has more to play for than just a championship.

The 19-year-old winger took the ice Friday with a heavy heart after hearing some unfortunate news from his home in Michigan where his grandfather, Terry Hillger, is battling cancer.

“Surgery didn’t go well, so they have to figure out what’s next for him,” O’Flanagan said, after scoring three times to lead the St. Catharines to a 4-0 victory over the Hamilton Kilty B’s at Jack Gatecliff Arena.

O’Flanagan, who is heading back to Michigan to see his grandfather this weekend, clutched a prized souvenir from his hat trick.

“I’m going to give this puck to him,” O’Flanagan said. “I’ve been thinking about him all day. I’m excited to get this game for him.”

Falcons coach Tyler Bielby tipped his cap to O’Flanagan for battling through such a difficult personal situation.

O’Flanagan, who is skating on an effective line with James Eng and Nate Shirton, has five goals and 10 points in nine post-season games, but said he could care less about personal statistics.

“I don’t care about scoring three goals, we won the game,” he said.

O’Flanagan loved how the Falcons responded following a 4-2 loss in Game 2.

“It’s great (to win) and it makes it a lot better to beat these guys,” he said. “They were talking how we aren’t competitors and can’t compete.

“We played a whole 60 minutes. That’s why we won and why we goose-egged them on the board.”

The Falcons turned in one of their top overall efforts of the season.

“That’s what we’ve been teaching all year, so as a coach, we’re pretty happy when we see it all come together,” Bielby said. “That first 40 minutes, that’s how we’ve been trying to coach them all year.

“We showed up and didn’t give them much.”

The Kilty B’s, who were the top scoring team in all of the GOJHL this season, managed a measly 13 shots on Andrew MacLean, who earned the shutout.

“I think when you have that kind of compete in you, it’s tough for other teams to find room,” Bielby said. “We kept coming, but once again, it’s just another hockey game and we have to be ready for Tuesday and replicate that.”

St. Catharines defenceman Mason Howard, who has been battling a lower body injury and was ejected from Game 2 for a check from behind, didn’t hit the scoresheet but turned in a dominating physical effort.

“Howie, if he wants to be, can be a man among boys,” Bielby said. “If he plays the game the right way and plays a clean game, he’s very beneficial to our team. He’s a leader in our room and is a big part of our pulse.“

Falcon facts: Owen Simpson, Blake Yetman, Josh Reilly and Mitch Dmytrow did not dress for the Falcons  . . . The 2019-20 and the 2021-22 Falcons Annual Awards Banquet and Luncheon is scheduled for Sunday, May 15 at Johnny Rocco’s. Doors will open at 10:30 a.m. and the program will begin at 11a.m. Lunch will be served at noon. Tickets must be purchased in advance before Wednesday, May 11. Cost is $35 per person and are available at the arena at the sign in table from Pat Altoft or Cathy McConnell. E-transfers can be done as well, contact Cathy at 905-321-1629 for details  . . . Former Falcons coach Wes Wolfe, who recently parted ways with the Cobourg Cougars of the Ontario Junior Hockey League, was in attendance.