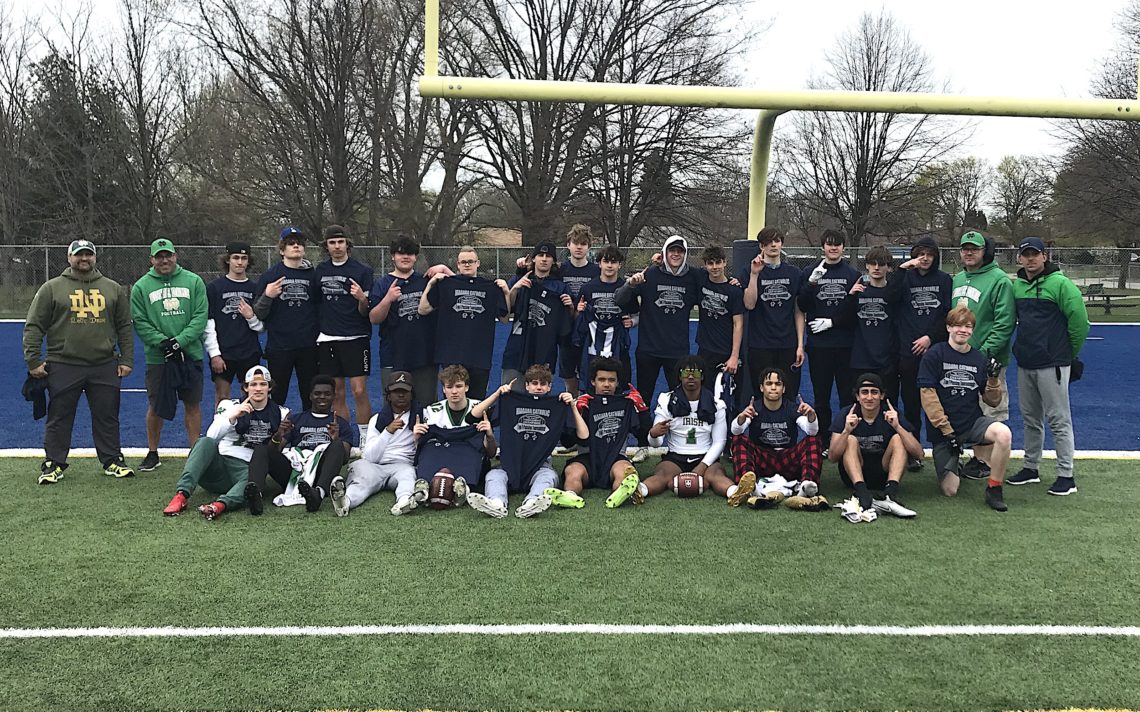 This was the first time the tournament involved junior teams and six Niagara Catholic Athletic teams competed at that level. There were also six Catholic teams at the senior level. Organizer Rick Oreskovich is looking forward to welcoming back teams from the public board in 2022 when the tournament expands to 12 teams at both the junior and senior levels.

“We couldn’t expand it this year because we went to one day for juniors and seniors,” he said. “We missed not having the public schools here but I couldn’t do anything about it.”

Oreskovich was thrilled with how Friday’s tournament turned out.

“We had a great time. The weather held out, the competitors were well-behaved, they played well and they tried their best,” Oreskovich said. “I think they got a lot out of the day and they all got along which was the main thing. It was a successful day.”

The competition was certainly less fierce than when the teams play tackle football in the fall. There was plenty of camaraderie and good natured chirping back and forth between the teams.

“It is more of a gentleman’s game but a lot of these guys play together in summer leagues and they know each other quite well,” he said. “We want to see the camaraderie and the respect for each other, the coaching staffs and the officials.”

“You get the kids out to run around as they get ready for the summer. We are also trying to get ready to play for next season and it was just a good day all around,” Bisci said. “There is intensity but there is not as much. It is more a fun day to run around and work on your skillsets.”

Bisci is looking for big things from Tessier this fall.

“He’s a really good player. We have a lot of athleticism offensively and he really compliments it. We will probably be moving him to running back this fall and it will be an interesting move for us.”

“We started early at 8:30 and we won of our first two games by quite a bit. It was a fun day with the boys and we got to go for lunch together and hang out as a team. We got a couple of the younger guys who are coming up to senior next year a touch of senior football. It was a good day of football and lots of winning.”

It was also a laid-back kind of outing.

“It was really competitive but compared to tackle football, it took the edge off and allowed us to have more fun no matter what the outcome was,” Tessier said. “Today we got together with our friends and had some fun regardless of how well we did.”

The 18-year-old Welland resident, who was hampered by a torn quad last fall, is looking forward to returning to a familiar position with the Irish.

“I played running back from the time I was 10 years old up until I was in Grade 9 and they transferred me to wide receiver,” he said. “I played two years there and I decided my heart was really at running back so I am playing running back for the Spears this summer. I am hoping to come back, have a really big 12B season and hopefully we can run it back and win another OFSAA (Ontario Federation of School Athletic Associations) championship. I am hoping to be a big part of that.”

Tessier’s long term goal is to play football at the next level.

“This year, I have been spending a lot of time in the gym to prevent injuries and make sure they don’t happen again.”