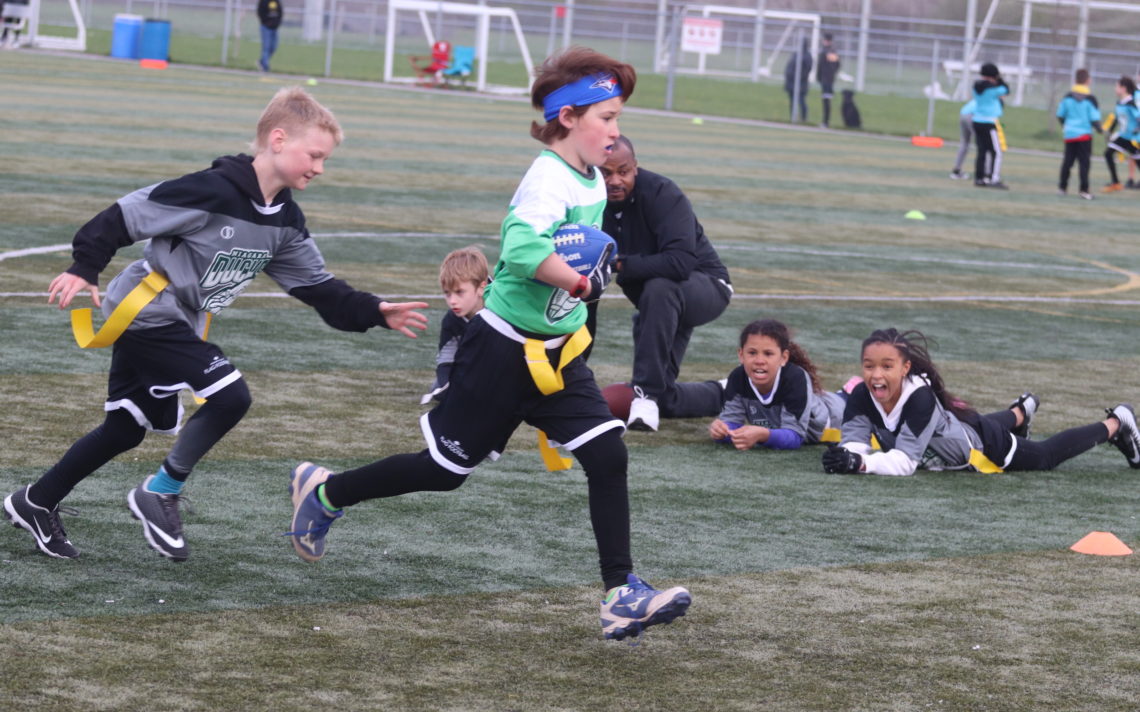 The association, which featured about 320 kids in its house league last fall, has ballooned to 530 participants playing outdoors every Friday night at Youngs Sportsplex in Welland.

Coach and founder Matt Hill feels the popularity of the program can be attributed to a number of factors, with NYFL’s coaching at the top of the list.

“We do training with our coaches, we get them together and we are always brainstorming together,” he said. “We have some former CFL players and former university level players who have come back and helped out. We also have dads and all kinds of people helping out and it has really taken off thanks to them and the great support we get from the parents.”

Around 60 volunteer coaches helped make the league run smoothly, supplemented by a few high school students who get paid to officiate and coach.

“They are tremendous and they are really valuable to the organization,” Hill said.

One of the organization’s volunteer coaches is Herdy Christian. The Akron, Ohio native, who has been coaching football for more than 20 years, came to Canada in 2017.

“When Matt started the program I signed my son up and I started to help coaching,” he said. “It is very professional and definitely a family-oriented league and that is what I like the most about it.”

“What I get out of it is helping the kids and I truly enjoy it. I like see the progress of the kids each year, see the kids grow, and I am trying to help make this the best program around.”

He loves seeing the smiles on the kids’ faces.

“They are all having a lot fun and they are progressing and developing.”

Christian has two of his children playing in the organization, 11-year-old Devonte and 10-year-old Skylar.

“They definitely enjoy it.”

The NYFL house leagues include: ages three to five-year-olds; six and seven year olds; eight to 10-year-olds; 11-12s; and, then all the way up to players in Grade 9.

“A lot of players used to transition to tackle at that age but we are finding that there’s a lot of kids who don’t want to transition into tackle so we want to create a home for them,” Hill said. “We have seen kids who have aged out and are coaching and reffing and our next plan is to get more high school kids playing because there’s a lot of them out there.”

The association has been very successful in attracting girls to the co-ed house leagues and Hill is excited to see how NYFL’s first all-girls travel team fares at the upcoming provincial championships in London.

“There had never been one in the area before and that tournament will be really exciting and we have a really strong girls team,” he said. “Some of the girls played on our boys team that did well in tournaments in Toronto.”

The house league started two Fridays ago and will run unit the end of June. It will culminate in a final tournament on a Saturday.