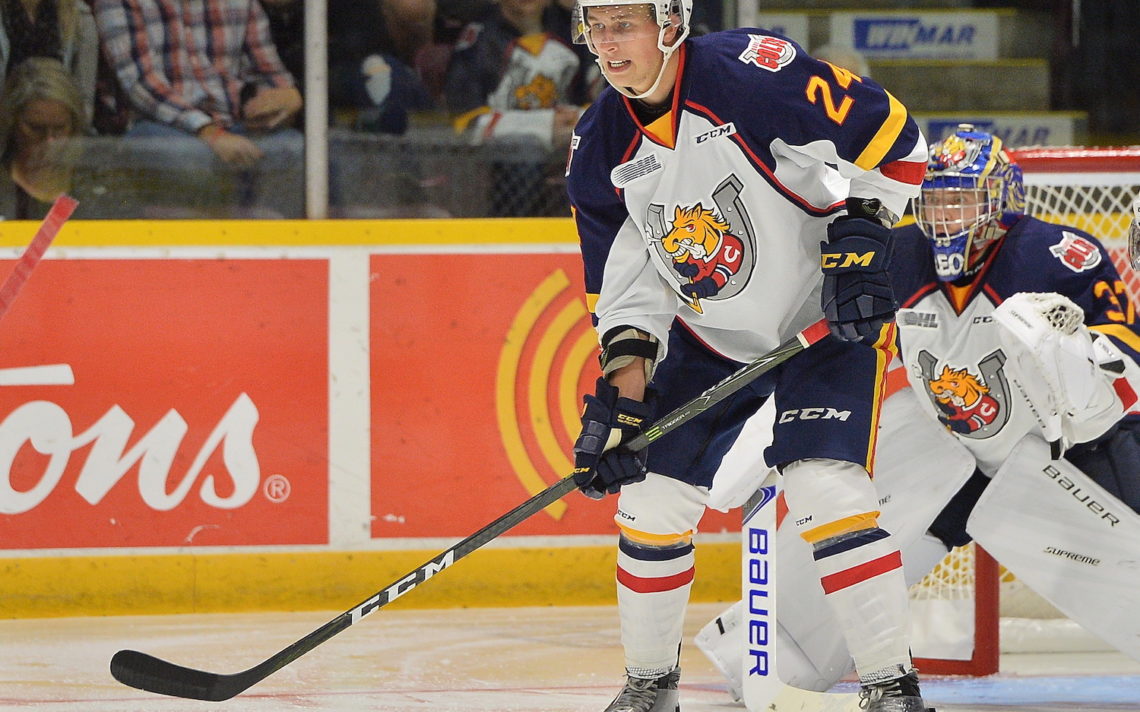 Falcons beef up with big Mac

It’s been a week of change for the St. Catharines Falcons.

MacArthur made his Falcons debut Friday in a 4-1 win over the Caledonia Corvairs in a Greater Ontario Junior Hockey League, Golden Horseshoe Conference game at Jack Gatecliff Arena.

The win improved the Falcons record to 12-3-0-2 and moved them past the Corvairs by a point and into first place. The Corvairs, who have two games in hand on the Falcons, have only two regulation losses this season, both to St. Catharines.

MacArthur brings a wealth of Ontario Hockey League experience to the Falcons, having played four seasons in Owen Sound. He began this year in Barrie before joining the Falcons this week.

MacArthur, a 20-year-old Collingwood native, contacted Falcons defenceman and good friend Matt Busby to see if the Falcons might be a good place to finish off his career.

“I found out what the situation was here and luckily it worked out,” said MacArthur, who picked up an assist in his debut.

MacArthur was naturally disappointed to see his OHL career come to an end, but isn’t looking back in regret.

“It’s new things and a new chapter and I’m happy to be here,” he said.

MacArthur had just one practice with his new club before stepping on the ice to take on the powerful Corvairs.

“I’ve been off the ice for about a week-and-a-half and then got on the ice for practice and  the game today,” he said. “It was a bit tough but it’s still hockey and I’ve been playing my whole life.”

“Just steady play and great in-room leadership,” Fitzgerald said when asked what he expects from MacArthur. “He’s a great character player who had a lot of experience. We have a little younger team than we are used to here so he’s really going to help the young guys.

“I thought he played really well tonight. He’s a great addition and we’re thrilled to have him.”

Broomhead was sent to the Niagara Falls Canucks while Chariot is now a member of the Welland Junior Canadians in deals that netted the Falcons cash. Both are 20 and had to be moved out with MacArthur coming in. Teams are permitted to have only nine 20-year-olds on the roster.

Fitzgerald admitted it can be tough on a team when roster moves are made.

“It can be a bit of a distraction if the guys don’t take it the right way,” he said. “Tonight, we came in focused and did the job. Kudos to them because they easily could have been distracted but we came here ready to work.”

St. Catharines grabbed a 3-0 lead in the first period thanks to a solid 20-minute effort.

Tanner Main, moved up to the wing from defence, knocked in his first of the season followed by a power-play marker by Zach Lawrence. Busby then notched his third of the season when his shot towards the slot kicked off the skate of a Caledonia defender.

The Corvairs began the second on a four-minute power play but the Falcons did a good job of killing off the penalty.

The rest of the period was filled with an inordinate about of penalties, including a minor to Falcons netminder Owen Savory for delay of game after knocking the net off. Both teams were also called for too many men on the ice. Nathan Smilsky netted his first of the season to give St. Catharines a 4-0 lead after 40 minutes.

The Falcons killed off another four-minute penalty to begin the third. The Corvairs finally got on the board about five minutes in on a goal by Sean O’Brien.

Savory was brilliant once again, particularly as the game went on. The Corvairs finished with 48 shots on goal.

Main, Nathan Smilsky and Mitch Pellarin had a particularly effective game combining for a pair of goals and four scoring points.

“That was fantastic,” Fitzgerald said. “It was a new look for all three of them but hard work and attention to detail and they were rewarded. I’m really happy for them.”

Falcon facts: Jack Venneri did not dress for the Falcons . . . Bailey Fletcher, Jamey Lauzon and Cole Mayo were scratched for the Corvairs  . . . Several members of the Falcons alumni from the 1970’s were in attendance as part of the club’s 50th anniversary celebrations  . . . St. Catharines came into the game with the No. 1 penalty kill unit (89.1 per cent) and the No. 2 power play (25.7 per cent).

Matthew Caruso added a goal while Broomhead picked up a pair of assists.

BPSN Star of the Game: Falcons Tanner Main with a goal and solid overall effort.

For the Caledonia Corvairs: Sean O’Brien (9)