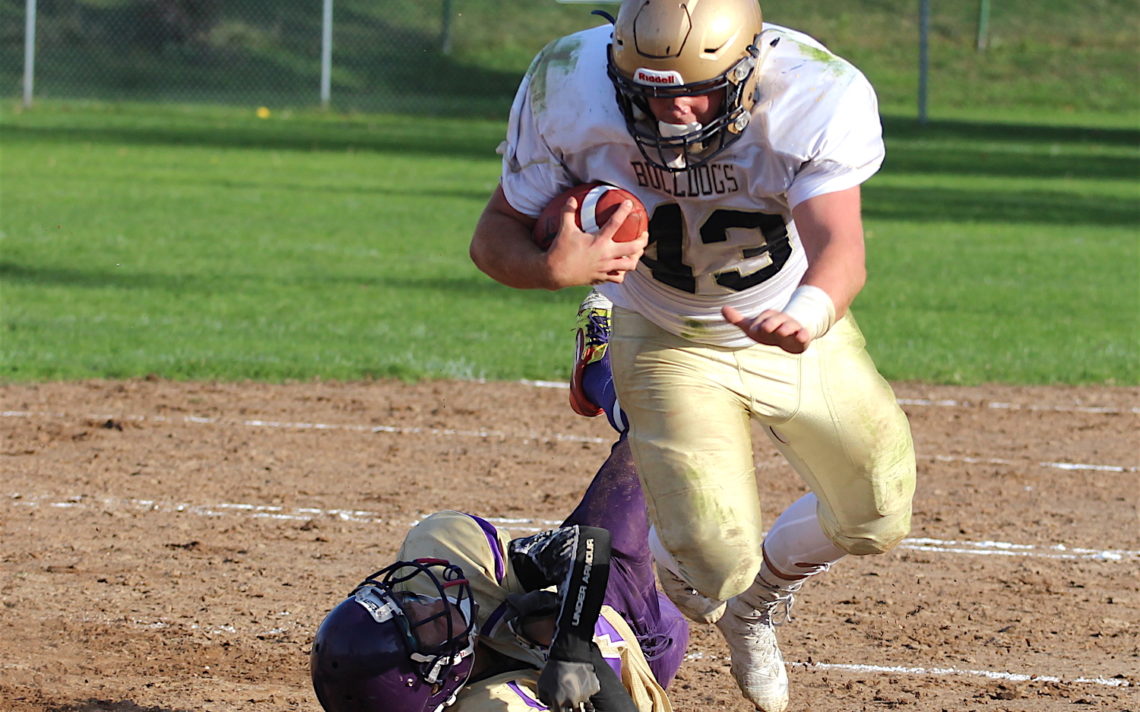 When the Sir Winston Churchill Bulldogs and Thorold Golden Eagles last met on Thorold’s football field, the Bulldogs left with their tails between their legs following a season-opening 43-19 loss.
It looked like Churchill’s Niagara Region High School Athletic Association Tier 1 season might be pooched and Thorold would reign as Top Dogs on the St. Catharines/Thorold football scene.
By the time the dog days of the regular season were over, Thorold sat in fourth spot with a 2-3 record while Churchill was tied up in fifth spot with a 1-4 mark. 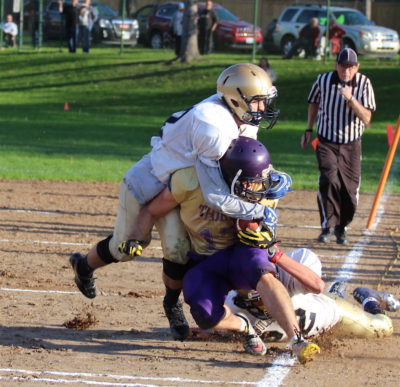 The two teams met again Friday in the NRHSAA quarter-finals and the Bulldogs emerged with a 22-5 victory by following a simple strategy; Give it to the Big Dog.
That Big Dog in question was 6-foot-1, 225-pound Eric Neilson, who carried the ball 80 per cent of the time Friday, rushed for more than 200 yards and scored on TD runs of two and 26 yards.
“We gave him the ball and they had to stop him,” Churchill head coach Peter Perron said. “Eric carried the ball like crazy and the kids rallied around him.”
Perron is glad to have Neilson back on his team after the Grade 11 student started the season on the sidelines.
“He’s the hardest-working kid, he has desire and he’s a football player,” he said. 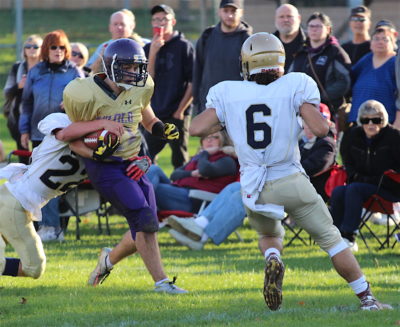 After playing summer football for the Spears, the 16-year-old Neilson took a few games off to heal his body. Among his maladies were a fractured wrist and a shoulder problem.
“I was itching to come back and I couldn’t wait to get back with my boys,” he said. “Football is my passion It’s where I grow and where I’ve become the man I am today.”
He played like a man among boys Friday. After the game, it looked like he had hardly broken a sweat.
“I’m ready to go,” he said. “I can go another game because of the conditioning we do in practice.”
Neilson’s return to health has been a sign of things to come for the Bulldogs. 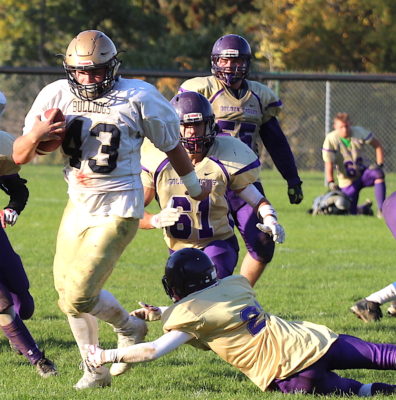 “It’s the first time we’ve been almost healthy and when we have the horses here we are a pretty good team,” Perron said.
Also contributing to the Churchill win were: Reid Edmands, one yard TD run; Nate Jordan, two interceptions and single point on punt; and, Hawkin Paleczny with an interception.
Churchill now moves on to play at unbeaten A.N. Myer at 1 p.m. on Nov. 1.
“We have to play Myer and if you are going to be the best, you have to beat the best,” Perron said. “They got those provincial championships there and we respect them fully, but we plan to play our hardest and see how the cookie (dog biscuit) crumbles at the end.”
For Thorold: Evan Ferguson booted a 30-yard field goal; and, Josh Taylor and Alec Young had interceptions.
“We shot ourselves in the foot today,” Thorold coach Duane Kemp said. “Forty-three (Neilson) ran hard today but we gave them more than 100 yards in penalties. We were inside the red zone a couple of times and we botched the snap and you can’t miss opportunities at this level.”
Kemp and his team was disappointed with the end to their season.
“It is going to sting for a while but hopefully it will light a fire under the returning guys and the guys that are done can hopefully be proud of a good season.”
Kemp was more than happy with how his team performed in its first year of Tier 1 football.
“This was a big leap for us and a big leap for the program,” he said. “We showed we can compete at this level.
SPARTANS 29 COUGARS 0
The Westlane/Stamford Spartans advanced to the NRHSAA semifinals Friday with a 29-0 victory over the visiting Centennial Cougars.
Chase Bowden led the Spartans attack with three rushing majors and Isaiah Maye also scored on a run. The Spartans’ defence added a two-point safety.
Westlane/Stamford advanced to play at Greater Fort Erie on Nov. 1 at 1 p.m.