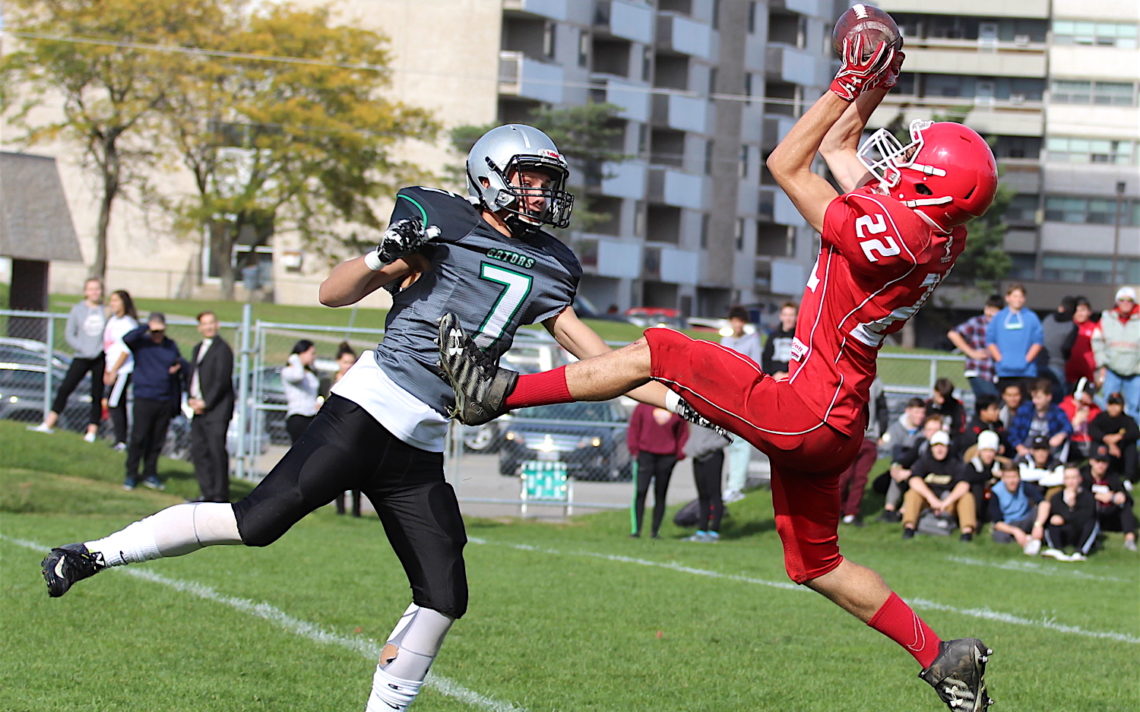 In a game that was much closer than the final score indicated, the visiting Lakeshore Catholic Gators defeated the Denis Morris Reds 28-21 Friday in Niagara Catholic Athletic Association senior football quarter-final action.

Trailing 14-13 late in the fourth quarter, the Gators took advantage of a botched punt to take possession on the Reds’ 25-yard line. It took three plays before Brody Crawford ran it in from six yards out to give the Gators a 19-14 lead. 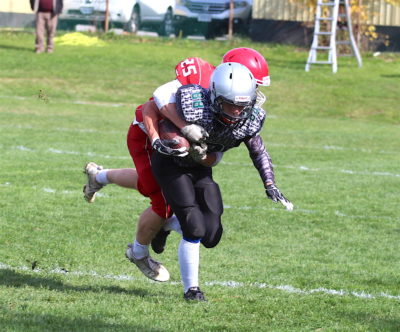 Following a successful two-point convert on a run by Crawford, the Reds fumbled the ensuing kickoff and Eric Ruigrok made them pay with a 39-yard TD run. A late TD by the Reds left them 24.5 seconds to create a miracle but the Gators swallowed up a short kickoff and the game was over.

“We played a very undisciplined game between mistakes and penalties and we couldn’t get things going,” Reds head coach Rob Battista said. “But the kids fought to the end.”

Looking ahead to next season, Battista sees a lot of positives.

“We will work to improve and we’ve had some nice Grade 10s that have come up at the end of the year,” he said. “We’re excited for next year.” 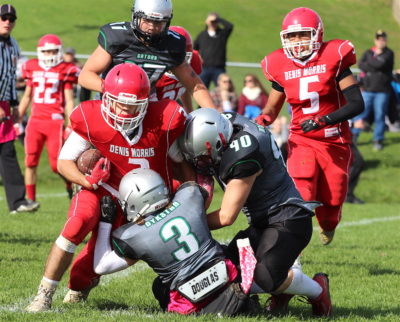 The Gators were excited Friday after winning their first playoff games in three years.

“We talked about it all week,” Gators head coach Bernie Tessier said. “We’ve taken our lumps the last couple of seasons, but we definitely put the time in this season and the football course helped.

“We are starting to see that come to fruition now.”

As far back as the summer, Tessier was predicting a better season by his squad.

Veteran player Tye Mezei was delighted with the victory.

“It feels good,” the 18-year-old said. “Myself and the whole team have been pushing for it since the beginning of the season and we thought it would be wonderful to get our school back up to where it was.”

Like Tessier, the 5-foot-9, 215-pound fullback/defensive end thought early on the team would be better.

“A lot of my friends in 12B, five or six guys, decided we wanted to come back because we wanted to leave on a good note,” Mezei said. “It just came together.”

Lakeshore now moves on to play Notre Dame, a team that beat them 56-0 in the regular season,

“It was a tough loss,” Tessier said “They got up on us early and I don’t think we responded very well. We made some turnovers they were able to capitalize on and I think we shut it down early.”

The Blessed Trinity Thunder advanced to the NCAA semifinals with a 18-0 blanking of the St. Francis Phoenix Friday.

“I’m glad we got through with the win, but we need to be exponentially better if we are to even have a chance against Saint Paul next week,” Thunder head coach Mark Antonelli said.

For the Phoenix, Eric Arseneau and Ben Battersby had interceptions.

“It was closer than I had anticipated,” St. Francis coach Sean Jones said. “Our guys played hard and gritty, but they were just a better team and we didn’t do ourselves any favours with a lot of penalties early on.”

For the Denis Morris Reds: TD passes of 29 and 45 yards from Travis Arp to Jacob Barnowski; 88-yard TD run by James Holt; interception by Michael DiMaurizio; fumble recovery and sack by Ben Abel.

Up next: In NCAA semifinal action, Lakeshore is at Notre Dame on Nov. 2 at 2 p.m. and Blessed Trinity is at Saint Paul Nov. 3 at 1 p.m.