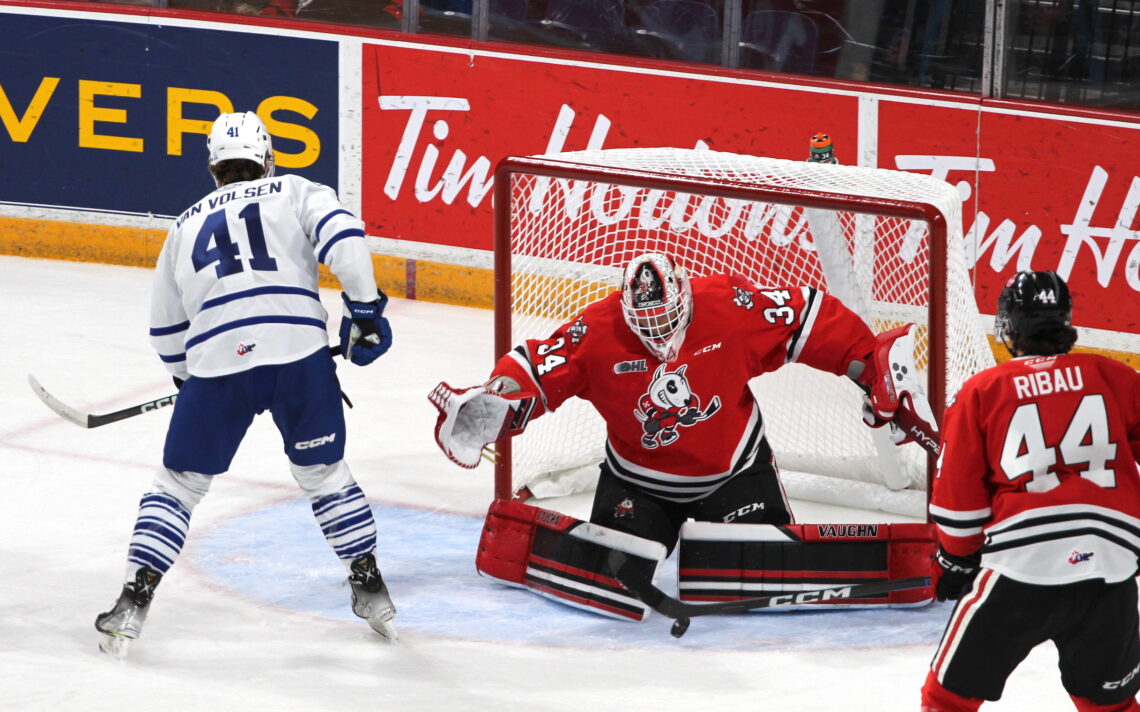 Amid a season filled with trades, injuries and far more losses than wins, the Niagara IceDogs may have found a glimmer of hope for the future.

Niagara head coach Ryan Kuwabara recently put together a forward unit of Alex Assadourian between Zakary Lavoie and rookie Kevin He and the trio clicked immediately.

He and Assadourian each scored Thursday as the IceDogs dropped a 6-2 decision to the Mississauga Steelheads in Ontario Hockey League action at Meridian Centre.

The loss was the eighth straight for the IceDogs who fell to 8-23-6-1 and haven’t won since a 5-3 victory at Erie New Year’s Eve.

He, who led the trio with a goal and an assist, said the line has come together quickly.

“I think it all started in practice,” He said. “I was suspended for two games but the last couple of days we were practising together and we played really well.”

Lavoie, acquired from the Steelheads, has fit in nicely since the deal while Assadourian, picked up from Sudbury, has also displayed promise.

“They’re great guys in the dressing room. We get along really well and that’s a big part of it,” He said.

He admitted finding chemistry has been difficult amid the wealth of trades made this season.

“It’s definitely not easy when you don’t know who you’re playing with but sometimes you just have to find a way,” He said. “Now, nobody is moving anymore so we just try to build chemistry and go from there.”

Kuwabara liked what he saw from the line.

“It’s really gratifying and I’m happy for them,” Kuwabara said. “They really work hard each and every day in practice. Right now, we’re trying so many different line combinations to find some magic and when you hit it sometimes, to see them have some success, I hope the rest of the guys get going here too.”

Kuwabara said the trio wasn’t put together by accident.

“They’re three speedy guys who seem to be able to feed off each other in practice,” he said. “There’s always a thought process.”

Kuwabara admitted fatigue may have been a factor in a third-period collapse that saw the Steelheads break open a close game with three unanswered goals in the final 20 minutes.

“I thought our forwards started to tail off a little bit,” he said. “They didn’t have as much jump as the first couple of periods and that’s probably attributable from playing a lot of minutes maybe they shouldn’t.

“It’s tough to grind through night in and night out and be down one goal or whatever and have to keep try to battling back. For these young guys to do that, I’m super happy their compete level was still there.”

The IceDogs displayed much more structure in the first two periods.

“Every day we keep working on some part of our game and we implement it and get better and better. I thought sometimes our D-zone was solid and sometimes I don’t know what I was watching,” Kuwabara said.

Up next: The IceDogs are back at home Saturday against Kingston.