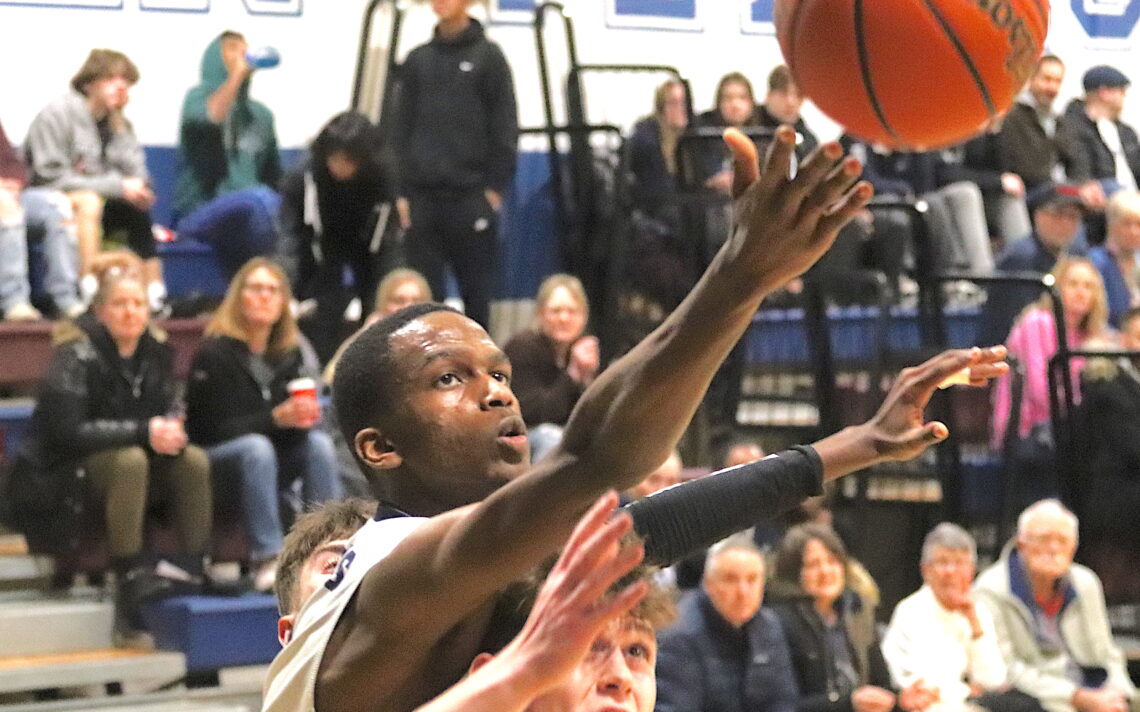 And just like the two previous games, the Sir Winston Churchill Bulldogs prevailed with a 56-54 victory over the Eden Flyers. The game came five nights after the Bulldogs eked out a dramatic 66-65 victory over the Flyers in the championship game of the 66th Annual Welland Tribune Basketball Tournament and five weeks after Churchill came out on top 51-43 in the final of the 59th Annual Standard Boys High School Basketball Tournament.

On Thursday, Churchill led 15-4 after one quarter and 29-16 at the half before Eden cut the lead to 45-39 after three quarters and then tied the game at 54-54 with 1.35 left in the game. Just like in the Trib final, it was Mazen Yagubi scoring the winning points for Churchill.

Churchill head coach Martin Cook was left with a case of déjà vu after the game.

Cook likes where his team is at heading into the break.

“We made a turn after the Christmas break and we refocused on what we are trying to do. We worked on the offence we are using and we like where we are going. It works to our players’ strengths,” he said. “Defensively we are coming along to get to our ultimate goal of OFSAA (Ontario Federation of School Athletic Associations) and we are heading in the right direction.”

Churchill’s depth has played a big role in its success this season.

“I like that we can go big, we can go fast, we can go guards or we can go with shooters, although, not as much today,” Cook said. “We have a lot of combinations.”

“What can we say? We keep making it a game and not quite getting over that hump but that’s alright. I am proud of the way the guys played.”

For the second straight game, the Flyers dug themselves a big first-quarter hole that resulted in them chasing the game for the final three quarters.

“Again it was not a great first quarter and we didn’t play the way we know we can and then we prove it for the next three quarters how much better we can play,” Thorpe said. “It would be nice to put all those four quarters into one.”

Sparking the comeback for the Flyers was Grade 11 big man Kai Schatz. He scored all 13 of his points in the second half and contributed in other areas as well.

Schatz has been a nice addition for the Flyers.

“It’s his first time playing under my system but he is smart player. To begin the season, he wasn’t getting as many minutes but he picked up things so well that he got in there pretty quickly.” Thorpe said. “He does a lot for us, especially with his size. He does a lot of banging around for us and he’s a soft-spoken guy so that is not necessarily his personality. He finishes around the hoop, we use him for a lot of little dump-offs and he can also step away from the basket. If the team forgets about him, he can shoot from the perimeter as well.”

The 16-year-old Niagara-on-the-Lake resident agreed it took him awhile to get comfortable with senior ball.

The 6-foot-7, 195-pounder feels his biggest improvement is a familiar one for young players.

“It’s my confidence. At first, I played a little scared but now I am more confident to drive to the hoop.”

Schatz might not love the results against Churchill but he enjoys the rivalry.

“We always put up a good fight and I feel once Riley and Caleb (Stewart) are back we will be better.”

Thorpe likes where his team his heading into the break. The Flyers just need to get healthy.

“We were missing both of the Stewart boys again but we are playing awesome. We had a good game against Myer a few nights ago (a 20-point win) and this was a good game regardless of the final outcome considering two starters were still out.”