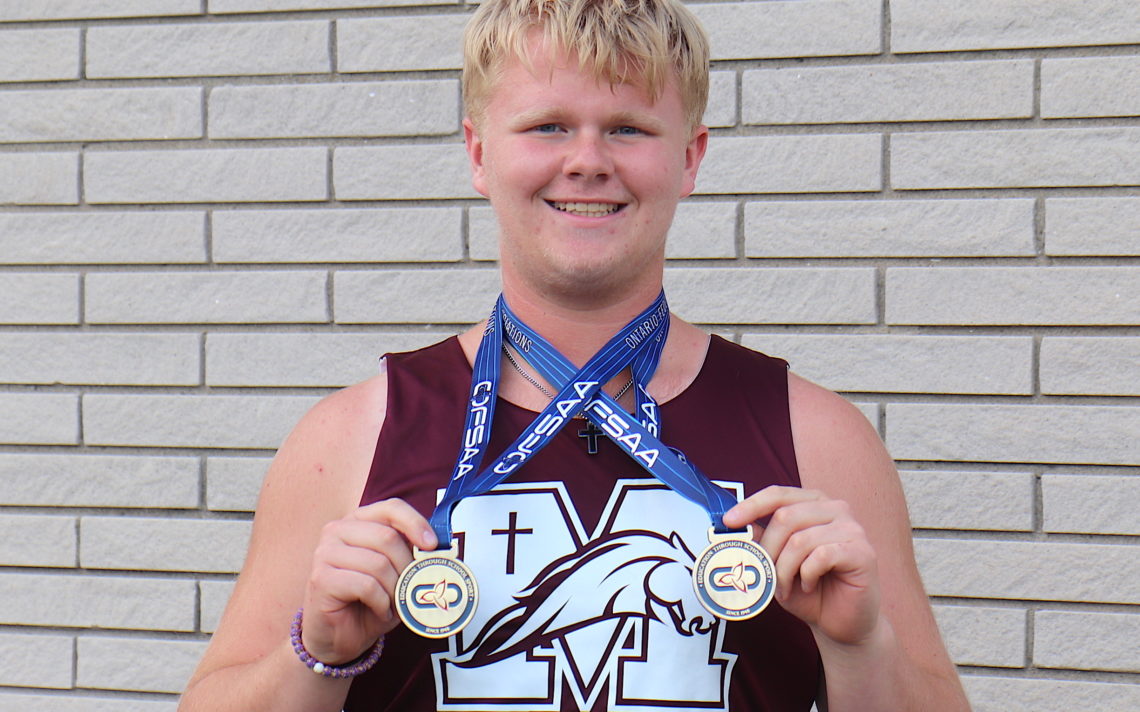 “I guess it was trying my best at every practice, showing up and getting people to push me to do my best.”

Those motivating him onward and upward were his parents, Jill and Tyler Dallman, and his buddy, Carson Gauthier.

The Grade 10 student at Saint Michael started OFSAA by competing in discus on the first day of competition. His first two throws were around 40 metres and then he recorded the winning attempt of 45.84 metres on his third attempt.

“It wasn’t a bad day but it was still not my best. It was good enough to win,” the Thorold Elite Track Club member said.

He ended up winning the event by more than five metres.

On Day 2 of the provincial championships, Dallman had a number of throws under 14 metres in the shot put and then recorded the winning throw of 14.68 metres on his fifth attempt. He ended up winning the event by a mere seven centimetres.

“I have never had that close a finish,” he said. “When they announced it it was ‘Holy.’ I didn’t know that I had won. There was a lot of adrenaline and happiness.”

The 15-year-old Niagara Falls resident celebrated his double golds with a guilty pleasure.

“We went out for dinner that night and I had two bacon cheeseburgers,” he said. “It was a cheat.”

The gold medals are now hanging on a wall in his room.

“I look at them every day and think if I can do that, I can do anything.”

He has high hopes for his throwing career.

“I would like to get a scholarship at a school in the States and keep throwing.”

Dallman knows there’s lots of work still to do to make that a reality.

“I need to try hard in school, practise even more, do more lifting and get better at everything.”

He realizes the academic part of the equation is crucial for his scholarship aspirations.

“I want to be able to throw against the best people in the world. That would be a great opportunity.”

He loves the sport.

“I like the adrenaline I get from each throw and I like seeing how far it goes,” he said. “Most of my throws feel amazing. Knowing that you can throw farther than most people is cool.”

Last year in his first full season of competing with Thorold Elite, Dallman won the hammer at the U16 Athletics Ontario Provincial Championships, the discus event at NXT CHAMP and the intermediate boys discus at the Ontario Minor Track Association Track and Field Championships. He finished 2021 as the top-ranked athlete for his age group in the province in discus and hammer throw.