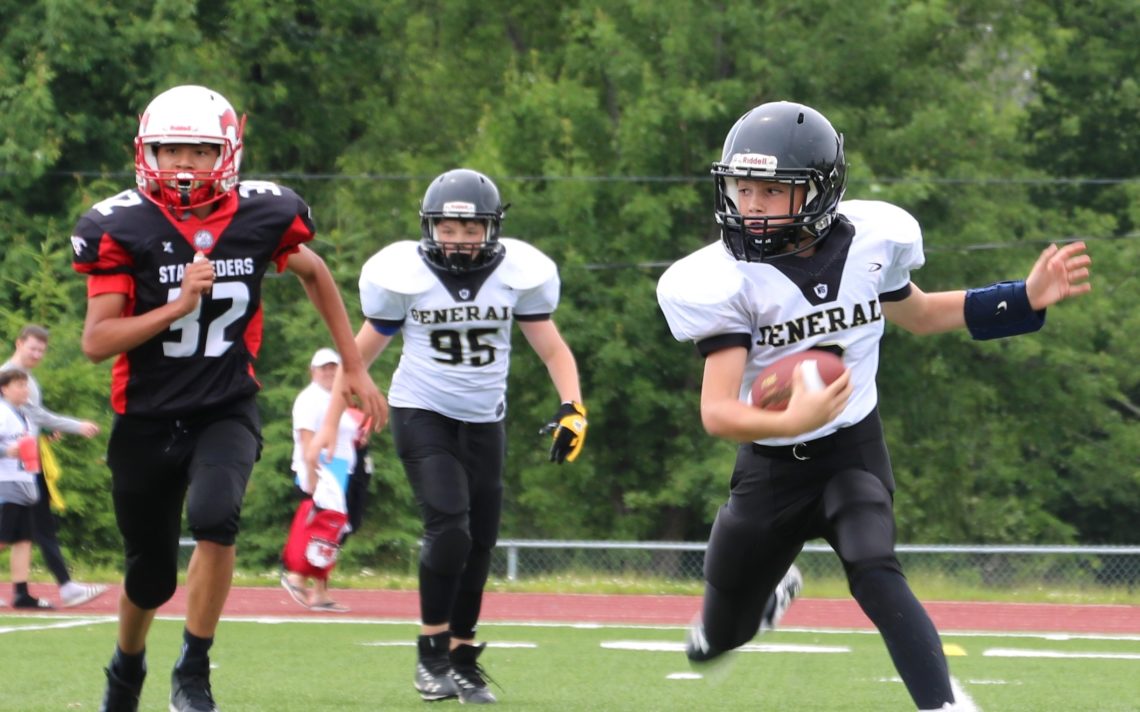 The Niagara Generals travel football teams came within two points of sweeping their first home games of the season this past Sunday.

The bantam Generals defeated the Oakville Titans 21-0, the peewee Generals blanked the Burlington Stampeders 16-0 and the atom Generals were edged 25-24 by Hamilton.

“Sunday’s battle against the Oakville Titans was hard fought. With our defence being a force, the Titans were not able to move the ball,” Generals head coach Bruce Macrae said. “Our offence was up against a very tough defence, but with our defence not allowing them to move the ball, it gave us time to figure out their holes and eventually punch in the touchdowns.”

“I would be doing a disservice by giving shoutouts in this game. The stars of this game can be seen by checking my roster,” Macrae said. “This team is and will continue to be a force to be reckoned with. The 21-0 score shows that and the three shutouts of the season show our defensive strength.”

The Generals are on the road against the Waterloo Predators this weekend.

“The game this week rode on the backs of our defence and special teams,” Generals coach Kent Wakem said. “We all know how important special teams are to our Canadian game and it couldn’t have been more clear this past weekend.”

The Generals got off to a great start, when Luis Corredor-Reyes recovered the opening kickoff and returned it for a major. That would be the only major either team would record until there were two minutes left in the game. Rudy Somerville connected with Dyami Maphar for the lone offensive major of the game.

“Burlington is a well-coached centre and brought a very disciplined team to Niagara. It was a defensive battle for the entirety of the game with both teams making major plays in the backfield,” Wakem said. “It was a very enjoyable game. It takes these sorts of games to build character and push our players to improve and excel on the field.”

The Generals are in London this weekend to take on the junior Mustangs.

“Today’s (Sunday’s) game against Hamilton was, by far, our best game of the season. The game was a back and forth nailbiter,” Niagara head coach Andrew Lewis said.

Niagara opened the game with two big runs by Karson Stevens that set up a rushing TD scored by Jake Brewster. Brewster had a long rushing TD in the first half, but Hamilton went into halftime leading 19-12.

Niagara’s defence turned the ball over on downs to open the second half and the offence scored to cut the lead to 19-18 going into the final quarter. Hamilton grabbed a 25-18 lead before the Generals responded with a gutsy 30-yard TD scamper by Stevens.

“Unfortunately, our guys were unable to convert on the extra point to take the lead, ultimately losing the game 25-24,” Lewis said.

Niagara’s defence was led by the play of Eli McLean, Anthony D’Andrematteo and Stevens.

“This was the best game I’ve ever been a part of. All the coaches were on edge on both teams. These are the games that we love to see and be a part of,” Lewis said. “I could see and feel the excitement in our guys’ eyes and attitudes. Although we lost this one, I’m very proud of how our guys played. The players made a huge improvement from the previous week on both the offence and the defence.”

Next up for the Generals is a road game this weekend in London.