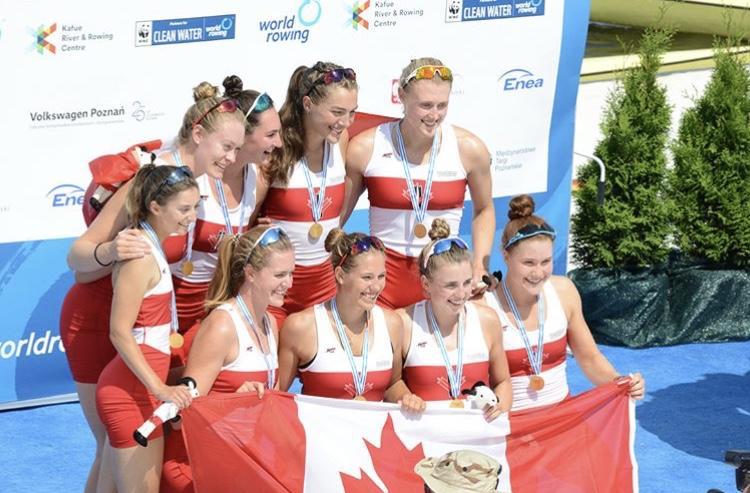 Court and Canada leave no doubt

St. Catharines coxie Laura Court and the rest of the Canadian eight celebrate winning a gold medal at the recent under-23 world championships in Poland. Photos special to BPSN.

Niagara-based rowers have usually amassed a Schoolboy or Henley gold medal or two by the time they start making their mark at the international level.

Not so for 21-year-old St. Catharines coxie Laura Court. The Ridley College graduate didn’t win a 2,000-metre race until last year’s under-23 world championships. Court and her teammates would go on to win the gold medal in the women’s eight.

Court’s previous top result was a coxing a Brock lightweight women’s four to a second-place finish at the Head of the Charles in her freshman year. At the Ontario University Athletics level, her top result was a silver medal.

Court and the Canadian eight, which included St. Catharines native Morgan Rosts, proved that 2017 was no fluke by defending their title at the recent under-23 world championships in Poznan, Poland. 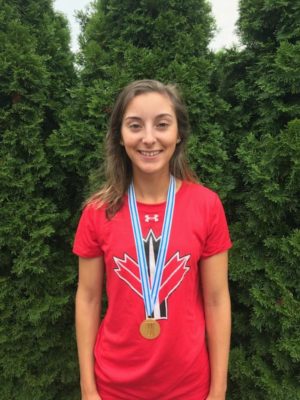 “The last time they weren’t very many expectations,” she said. “We knew that we were fast, but it was just how fast we actually were.”

Court described this year’s triumph as much more emotional.

“It was always at the back of our minds that we had to carry on what we did last year,” she said. “It was a little bit scary, but once we had crossed the finish line, everyone was pretty emotional.”

She attributed that emotion to the switching of the boat’s personnel prior to the world championships. The final lineup wasn’t set until one day before the boat started racing.

“It was emotional that were able to pull it off again and it wasn’t just luck this time.”

At last year’s worlds, some people felt that the only reason the Canadian boat had captured gold was because the American crew had experienced an equipment malfunction.

“This year we crossed the line and it was fair and square and we were able to beat them without anything going wrong on their end,” she said. “It was a really cool feeling to have that happen.”

The United States led early in the final before the Canadian crew overtook them in the third 500 metres.

The entire championships had a different feel for Canada as it went from being the hunter to the hunted.

“There are some very experienced girls in the boat, but there were also four of them who had never been to a world championship,” Court said. “For them, it was really cool to be hunted and for me as well, obviously, because I haven’t really won anything before the under-23 level.

“It was definitely a little more nerve wracking.”

In her evolution as a coxie, Court feels there are quite a few things she still needs to improve upon.

“Last year was a pretty big learning curve for me personally,” she said.

That learned curved was accelerated the last two summers thanks to the coaching of Lesley Thompson-Willie, an eight-time Olympic coxie for the Canadian’s women’s team.

“I was under her wing and she told me that all I need now the time to develop and that I am heading in the right direction,” Court said.

One approach she feels will help her development is to spent time off the boat watching from a coach boat.

Court, who started rowing in Grade 9 at Ridley College, is heading to the senior national team training camp in British Columbia to spend a week or so training and getting a sense of what it’s like at the senior level. It’s a chance to get her feet wet in a year when she graduates from the under-23 ranks.

“I want to spent a little bit of time in that environment before I end up living in it,” she said.

Court will return to Brock in the fall to write her undergraduate thesis and complete her psychology degree.

She is hoping to return to St. Catharines in time to catch the Royal Canadian Henley Regatta. Rowing Canada often enters composite crews in the championship events at Henley, but Court is not competing.

“I have some family and friends who are racing so I am planning to come and watch a bit of the action,” Court said.

She admits it feel a little weird to just be a spectator at Henley.

“I haven’t really watched many races so I am looking forward to it, especially watching the girls I coxie at Brock.”