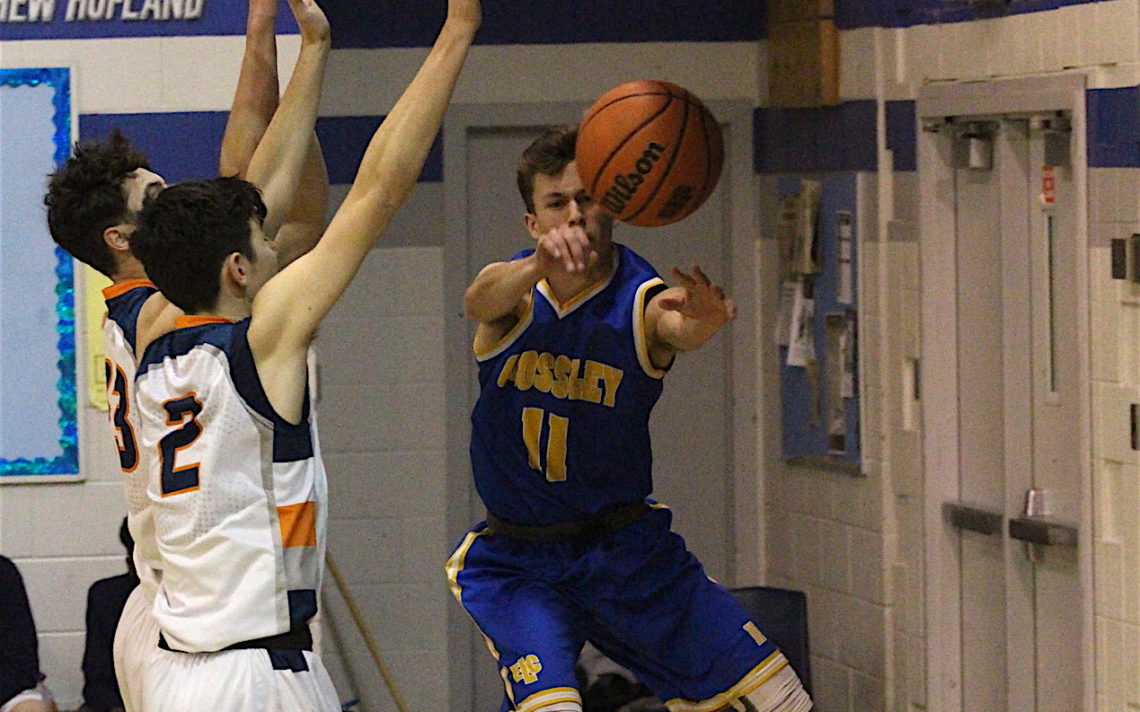 Jacob Bray was quiet but deadly Tuesday night for the Centennial Cougars.

The 17-year-old led his team with 17 points and also topped his squad in rebounds and blocked shots as the Cougars advanced to the championship semifinals of the Standard High School Basketball Tournament with a 67-41 victory over the E.L. Crossley Cyclone.

“It’s part of his personality but when he comes into big games, he really tends to step up. He has a pretty complete game.”

The 6-foot-2 forward is the poster child for unassuming.

“I’m kind of quiet most of the time,” he agreed, but said there are times when he can be loud. “In the change room before games, we are always pretty hyped up.”

The Grade 12 student plays travel ball with the Niagara Selects out of Niagara Falls and helped the team make the Division 2 finals of the Ontario Basketball Association last year.

“Hopefully this year we will be in Division 1 of the OBA league and then I will see what happens with post-secondary (basketball),” Bray said.

Mosley believes Bray could play at the next level

“He has the skill level but he needs to get physically stronger,” he said.

Centennial showed its strength against Crossley with a team game that emphasizes passing and familiarity with one another. The Cougars scrimmage in the summer versus St. Francis and Denis Morris.

“Everyone knows their roles and we play together really well,” Bray said.

The squad also has a lot of camaraderie.

“We are all friends off the court and not just when we are playing basketball,” Bray said.

He would love to get a crack at top-seeded St. Francis in the finals of the Standard tournament. The second-seeded Cougars will have to get by Churchill first and the Phoenix will need to take care of fourth-seeded Governor Simcoe.

“We will see how it goes,” Bray said. “We played them (St. Francis) in the SOSSA final last year and we lost. it was pretty close.”

Tuesday’s game was pretty close early as the Cyclone trailed 16-10 after one quarter. Centennial then led 39-18 at the half and 58-30 heading into the final quarter.

“It was a good game,” Crossley coach Jamie Shepherd said. “We came out in the first quarter and wanted to get in their faces and chase them off the three-point line. We did that well with the man-to-man.

“They came out strong in the second quarter and opened the gap and we just couldn’t get back.”

The Cyclone were hurt by an abundance of turnovers.

“It was what I expected,” he said. “They always play us really hard and it’s a rivalry that has started again early on in the season.”

Mosley felt the game was good for his squad.

Alex Cochrane poured in 25 points Tuesday to lead the Governor Simcoe Redcoats to a 62-42 victory over the Denis Morris Reds in the Standard championship quarter-finals.

BPSN Star of the Game: Centennial’s Jacob Bray with 17 points.

Up next: Centennial will play Sir Winston Churchill in the championship semifinals at 7:30 p.m. Thursday at St. Catharines Collegiate.