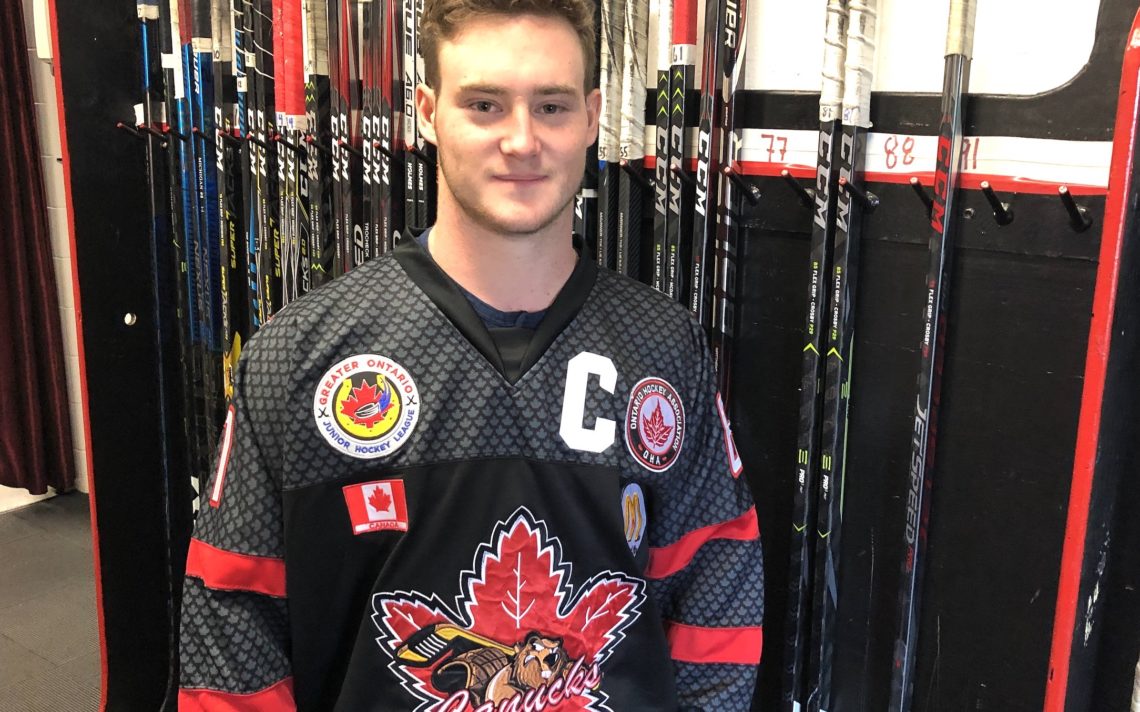 Justin Schneider is at the top of an impressive leadership group put together by the Niagara Falls Canucks this season.

“He’s a third-year guy now and he’s familiar with me and our coaching staff and how we do things,” Pietrangelo said. “He’s a hard worker — the hardest worker we have — he’s just a hard-nosed kid.

“He’s quiet, so he’s a little bit of a different type of leader.”

The 20-year-old Waterloo native was thrilled when he was named captain, replacing Ben Evans who moved on to the Wellington Dukes of the Ontario Junior Hockey League.

“I’m a little bit nervous, but excited at the same time.”

Schneider feels the example of working hard is the best message he can send to his teammates.

“I think it’s very important I work my (butt) off every game. It shows the older guys even though I am older, I still work my hardest,” he said. “I’ll (also) have to speak up and be a leader and play my game because I always play my heart out, and that’s a leader.”

“We’ve done it (multiple assistants) the last couple of years and I think at this level year, guys are young. What does a captain mean in minor hockey? Not much really,” Pietrangelo said. “In junior, it’s a little bit of a different level where they get their own niche. You find out who has what as far as character.

“I think having a bigger support group goes a long way.”

Schneider feels leadership is essential in a long season.

“It gives people someone to look up to and someone to listen to, and maybe that can help their game improve if they have a bad night.”

Pietrangelo is looking for the leadership group to take care of most issues on their own.

“That’s ideal for me. I don’t go in there unless it’s time to talk before a game or in between periods. That’s their room and I try to stay completely out of it. They have to figure things out on their own. “They don’t need me babysitting them 24/7. They don’t need to her my voice 24/7. I think that’s when it becomes ineffective, when you’re always harping and hearing the same thing. Sometimes the message is more beneficial or heard better when it comes from the the room.”

Having said that, Pietrangelo has an open-door policy when there are issues.

“With any leaders, it’s important to have that dialogue and communication between the coaches and the team so certain things get across, certain standards of what we want,” he said.

“This is the Niagara Falls Canucks and this is how we do things.”

“We played well and I thought we were the better team both games. We just let in too many goals and could have scored even more goals,” Pietrangelo said. “Three of four points, we’re really happy with that. Four would have been better, but we still have a long way to go just like everyone else does.”