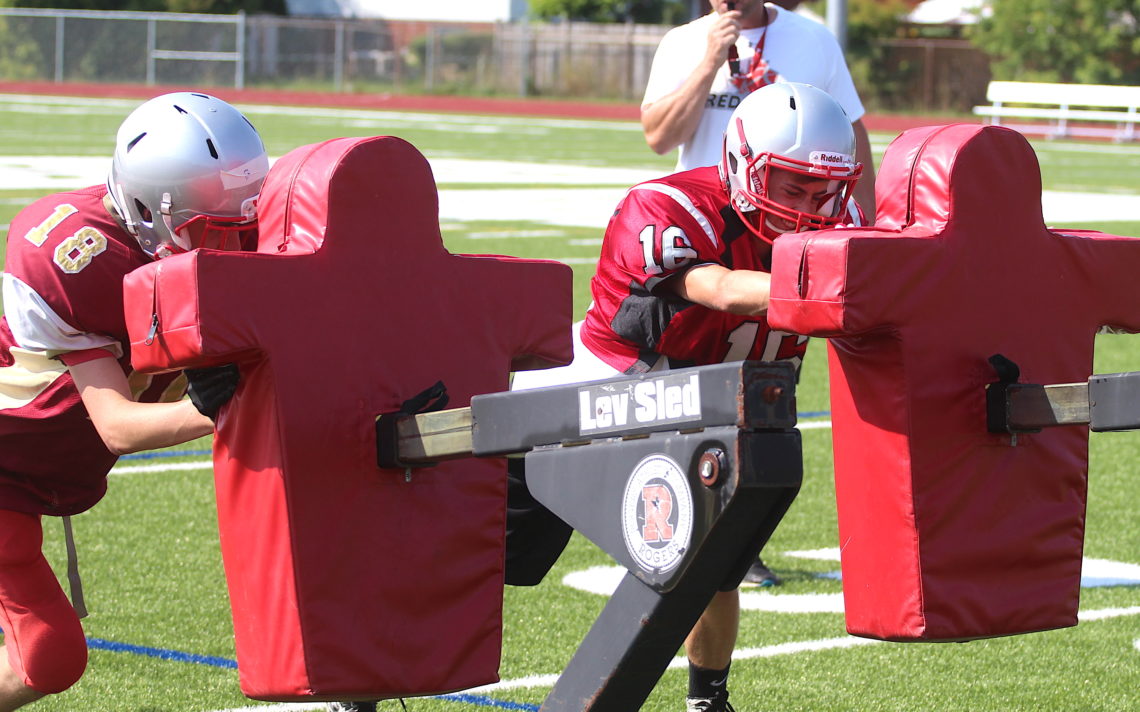 “The big thing is that we had a lot of Grade 11s last year that took that loss in the finals pretty hard,” Simcoe head coach Jamie Brophy said.

Governor Simcoe fell 44-7 to the Thorold Golden Eagles in the championship game.

“We just didn’t fire out well and we made a couple of mistakes,” he said. “We had a lot of kids who came back and those seniors and captains encouraged a lot of others to come out.”

More than 40 players have been coming out to practice and strong numbers are always a harbinger of successful football programs.

The loss inspired many of the returning players to hit the weight room and make use of the school’s artificial turf field.

“We had the opportunity to have them out for the spring and the captains also led and had other kids out whether it was on weekends or nights,” Brophy said. “They were running through stuff on their own which was great. We have a great leadership group.”

“It is a lot of the kids who we have had through the system since Grade 9,” Brophy said. “Where we struggled not getting numbers when they were in Grade 9, those kids have encouraged others through their actions.”

The Redcoats took a lot of lumps over the past few seasons to get them where they are today.

“It’s tough because we are building every year and kids want success right away,” he said. “It’s tough for them to understand that it is a building process but those leaders have been great motivators to encourage volleyball and hockey players who really want to be a part of this family.”

The returning Simcoe players have been using a family mentality to boost the program’s popularity.

“They have adopted ‘Our House’ and when they finish every practice, they leave no one behind,” Brophy said. “They always run back out to make sure no one leaves on their own.”

The Redcoats return eight players on both offence and defence for the upcoming season.

One of the key returning players is Scott.

“The big thing is he wants the team to be successful and he’s out here and is very encouraging,” Brophy said. “He and his teammates to get it back to where Governor Simcoe was a contender in every championship.

“We are not making any predictions at this point but we just want to see us build.”

The main goal is to make a return trip to the finals and Scott’s play will be an important factor in that desire.

“He can throw the ball, he can run, he is smart, he has played for a long period of time, but he can also play other positions,” Brophy said. “He is one of those players who want to play defence as well and he played safety for us too.

He will play both sides of the ball and be a contributor on both sides.”

The 17-year-old player has high expectations for his team this season.

“Half the guys are Grade 12 and it looks like a senior team, not a varsity one.”

The 5-foot-11, 160 pounder admits to taking the championship loss to heart.

“We worked our way up all the way to the end just to lose by that much,” he said. “We have that little fire in our hearts and we are going to work hard.”

Scott was one of the ringleaders in getting the players out on the field on weekends to play football. He has also been working hard to make sure everyone bonds.

“This year we are like a family and we are trying to make that the main aspect of our team,” he said. “It is the No, 1 thing we need first because you can’t have a good team without chemistry. You can have good players but you won’t have a good team.”

Scott wants to continue developing as a quarterback this season.

“I want to work hard this season and get a championship — that’s the No. 1 goal — and call more of my own plays,” Scott said. “I started doing a little bit of that last year and this year I want to advance in that area.”