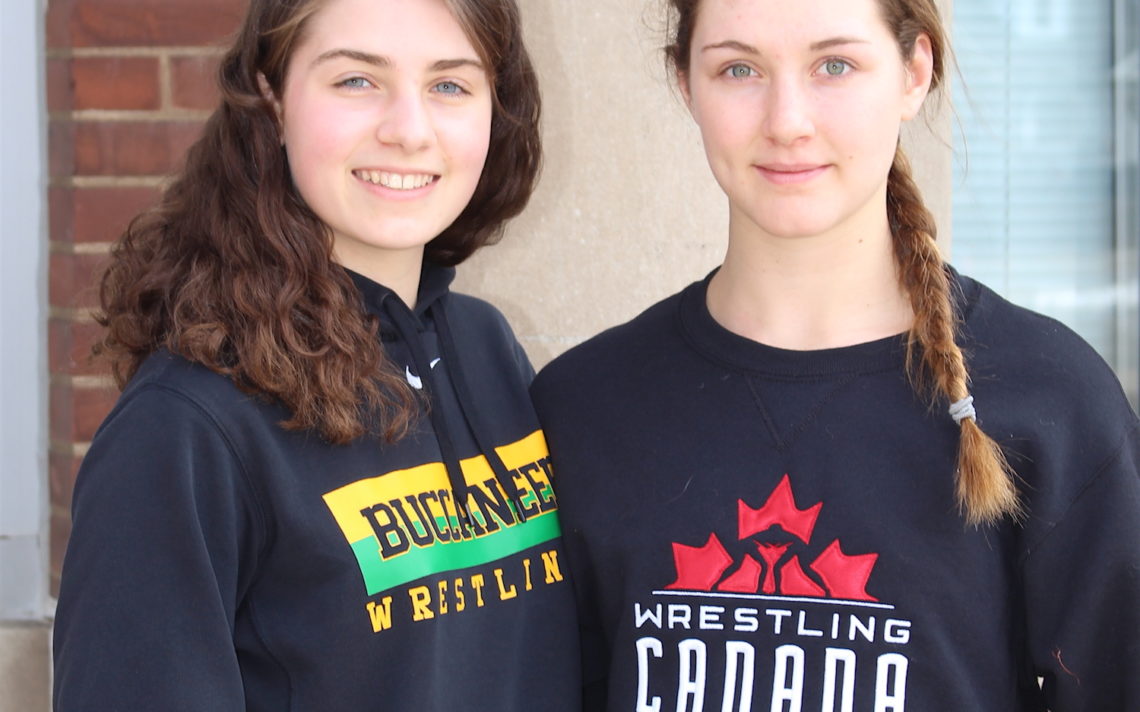 Tillmans, a four-time Zone 3 and 4 champion and three-time Southern Ontario Secondary Schools Association champion, had a dominating first day at OFSAA. She pinned all three of her opponents and didn’t have a point scored on her. On the second day, the 18-year-old Beamsville resident almost got pinned in her semifinal before winning 10-4. The 12B student then won the final 10-0 by technical superiority.

“It was kind of crazy,” said Tillmanns, who was making her fourth trip to OFSAA. “I was so focused that after I got the last point I went to the middle of the circle to shake her hands.

“It was ‘Wait a second. I just won OFSAA gold and that point just got me OFSAA gold. Omigod,’ Then I started jumping up and down and crying.” 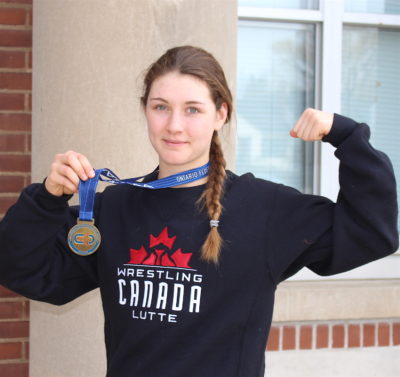 After shaking hands with the officials, she went and hugged her coach Dave Collie.

“And he started crying,” she said, with a smile. “It was my last year to compete in OFSAA and it was Dave’s last year to coach someone at OFSAA. It really meant a lot after last year when I came so close.”

The 2017 OFSAA bronze medalist was the last athlete Collie will coach at OFSAA. He retired from Beasmville at the end of the 2016-17 school year and now coaches at Brock.

“It is definitely cool because it’s a memory he will have forever and the same with me,” Tillmanns said. “It is nice to share that with him.”

Tillmanns, who has also been to OFSAA three times for rugby and won silver in 2014, was confident but not over-confident heading to OFSAA.

“There’s always that little quiver in your mind where you think that if you want to win, you have to work hard for it and it’s not going to be easy,” she said. “I didn’t think it was going to be easy, but I knew I could do it.”

Following OFSAA, Tillmans won a bronze medal at junior nationals. She will start at Brock in the fall and is going to join that university’s powerhouse wrestling program.

“I am going to see where it goes from there,” Tillmanns said.

She knows it won’t be easy to make the team, which is coming off its fifth straight national title.

“It’s the best team in the country,” she said.

Tillmanns has been training up at Brock already, which has helped her immensely in her development.

“I’m taking it one step at a time, but the end goal for any wrestler is to someday compete at the Olympics,” she said. “That is definitely a dream of mine and obviously I want to keep competing as long as I can.”

Sam Adams’s quest for a gold medal at the OFSAA championships was nearly derailed in the semifinals.

“In the last 30 seconds, I almost got pinned,” the Grade 10 student at Beamsville said. “I got turned and I had to fight it off.

“She was my toughest competitor.”

Defeating Briscoe in the 54-kilogram division gave her a huge dose of confidence.

“I knew I had a good chance of winning gold because I didn’t recognize the name of the other finalist,” she said. 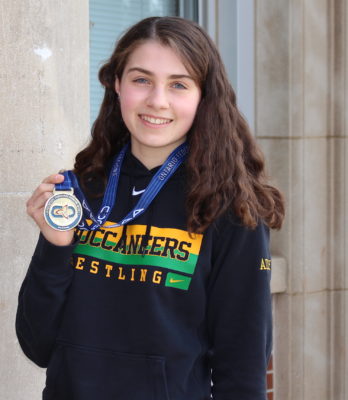 In the final, she won by technical superiority. The ref stopped the match early in the second round with her ahead 10-0.

“I was really happy that I had actually made it. That was my goal coming in,” Adams said. “I went into OFSAA knowing that I wanted it to make in on to the podium, but as I started winning matches, I knew that I really wanted to win OFSAA.”

Last year at OFSAA, the 16-year-old Vineland resident placed in the top eight with a 2-3 record. Next up for the two-time zone and Southern Ontario Secondary Schools Association champion are the cadet nationals. She enters as the 2018 Ontario cadet champion at 52 kilograms.

In 2017, Adams wrestled at the juvenile level, hoping to make Ontario’s Canada Games team, but she placed third in the province.

She trains year round with Dave Mair at Discipline Wrestling and has been wrestling for two and a half years. She did jiu jitsu for five years and one of her friends at jiu jitsu suggested she try wrestling.

“I tried it out and I really liked it,” she said. “I’m always learning new moves and challenging myself to do new things and hit new milestones.”

This year she has taken her training to a whole new level.