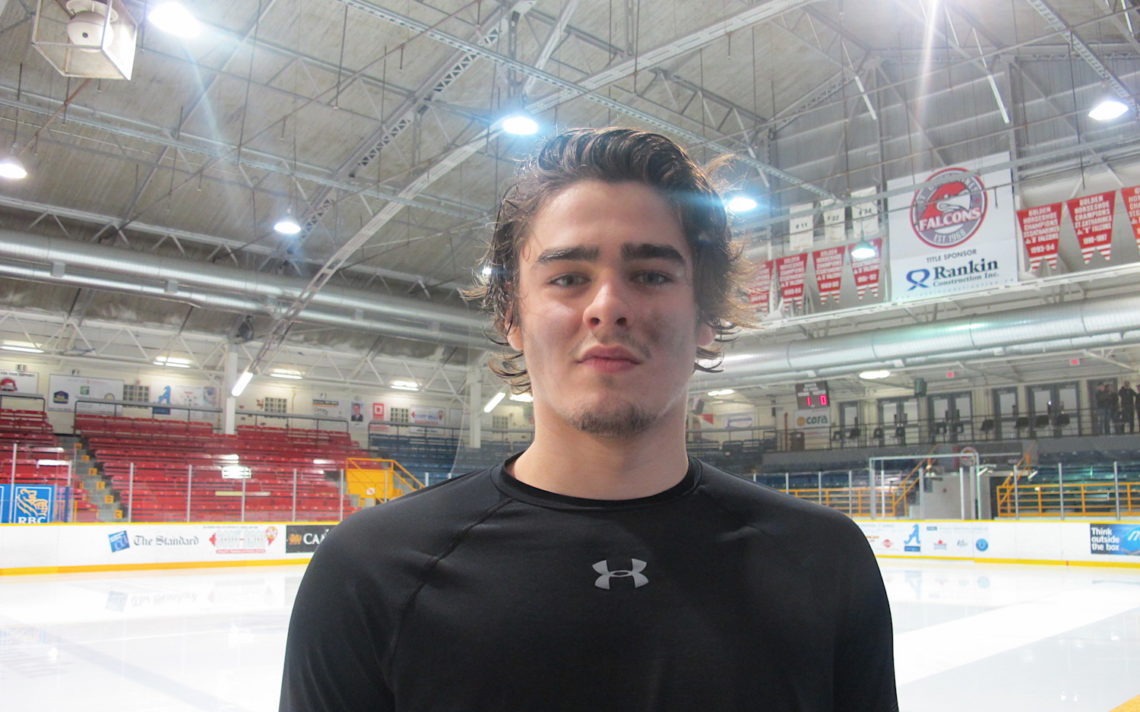 Carson Eden scored a goal and an assist as the St. Catharines Falcons topped the Ancaster Avalanche 4-1 in Game 7 of the GOJHL semifinals Monday. Photo by Bill Potrecz

It takes more than epilepsy to keep Carson Eden away from the sport he loves.

The 16-year-old, Thorold native was diagnosed with the disease earlier this season after suffering three seizures so severe he required hospitalization.

At that point, Eden took a step back from the St. Catharines Falcons and returned to major midget, where he was able to manage the disease without incident thanks to medication and helped his club to a bronze medal at the Ontario Minor Hockey Association finals.

So when the Falcons came knocking in the playoffs looking for reinforcements, Eden was more than happy and able to answer the bell.

Eden came through in the clutch for the Falcons Monday, scoring a goal and setting up another, as St. Catharines defeated the Ancaster Avalanche 4-1 in Game 7 of their Greater Ontario Junior Hockey League, Golden Horseshoe Conference semifinal.

The Falcons now square off versus the Caledonia Corvairs in a best-of-seven final beginning Wednesday in Caledonia. Game 2 is Friday in St. Catharines.

Eden was naturally all smiles afterward when discussing his effort.

“Our line (Zach Lawrence, Dante Felicette) was buzzing all game with a hard forecheck. We were playing simple hockey and ended up getting two points at the end of the day.”

Eden admitted it was difficult to head back to midget, but there was no point pouting about it.

“It was tough mentally. There’s two ways you can do it. You can roll over and call it a season or just keep battling and keep going,” he said. “The end result is I’m back where I want to be and I want to win a championship.

“I wouldn’t want to be anywhere else.”

“It was scary at the start, but now I know I can just play my game,” he said. “It does run in the family so there’s nothing else I can do. I just have to play my game and be me.”

Eden may not have even been in the lineup were in not for a spate of suspensions following Game 6 in Ancaster that left Carson Edwardson, Dakota Miskolczi, Kyle West and Michael Davies on the sidelines.

Enter Eden and youngsters Spencer Smith and Holden Rogers, who all contributed to one of the Falcons most complete efforts of the year with their season hanging in the balance.

“I’m so proud, from our veteran guys who stuck it out, to the young kids we brought in,” Falcons general manager/coach Frank Girhiny said. 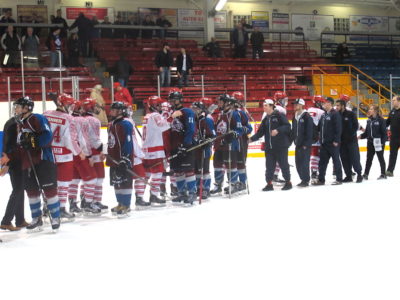 “We felt very confident we were winning this game. We had our goalie (Owen Savory), our back end and we had to mix up our forwards, but the forwards we put in were relentless and persevered and were hard working.

“If you outwork the other team, you most likely win the series.”

The teams played a scoreless first period, although the Falcons held the edge in play and hit a pair of posts. The Falcons had three chances with the man advantage in the opening 20 minutes.

Eden put the Falcons on the board early in the second when he scored on a breakaway. Six minutes later, he set up former Avalanche Lawrence with a perfect pass to put St. Catharines up 2-0 after two.

Ancaster finally got on the board less than a minute into the third then Dirk Stadig blasted one home from the top of the circle.

Lukas Smilsky added an insurance marker late in the third before Liam Dunda scored into an empty net.

Falcon facts: Tanner Brown, Edwardson,Miskolczi, West, Noah Perlic and Davies did not dress for the Falcons  . . . Jordan Simpson, Nicholas Breault, Michael Cabral and Brady Rutherford did not dress for the Avs  . . . Former Falcons coach Wes Wolfe, now an assistant with the Erie Otters, helped out with video Monday . . . The Avalanche were hit with a misconduct for not having their entire starting line up on the ice for the national anthem  . . .  The home team won each game in the series.

For the Ancaster Avalanche: Dirk Stadig.