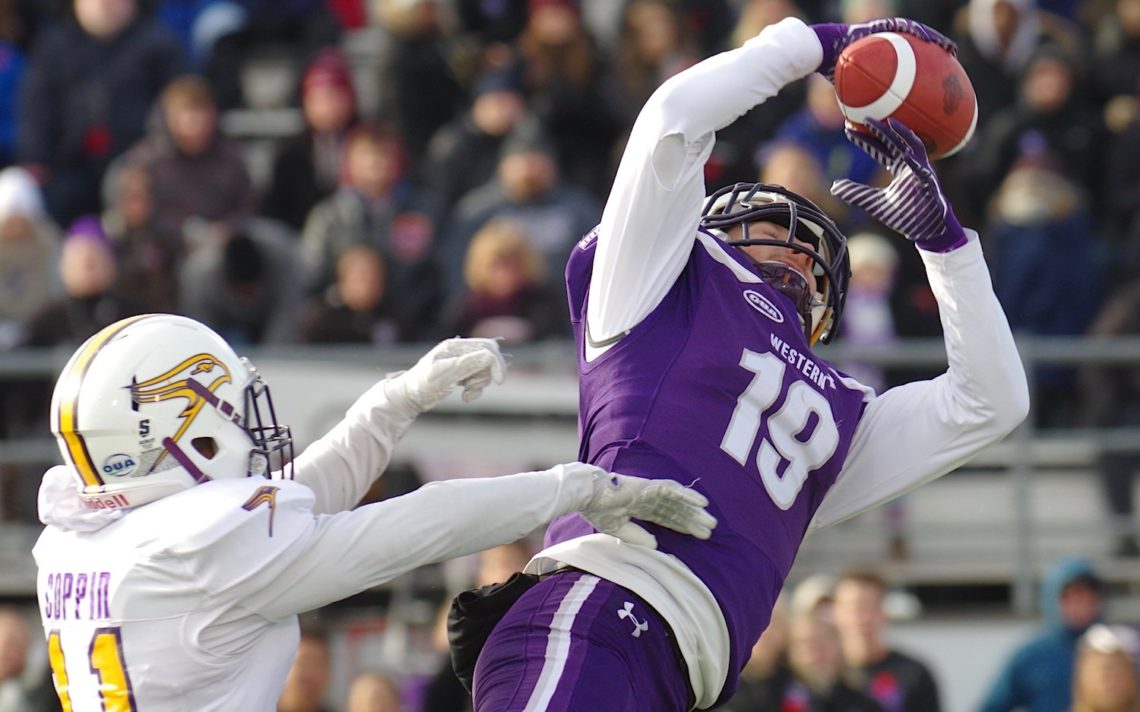 Western’s Harry McMaster (18), a Saint Paul graduate, is one of six locals on Western which will be playing in the Vanier Cup Saturday in Hamilton. Photo by PETE METHNER.

Western beat Acadia 81-3 in the Uteck Bowl to advance to the Vanier Cup this Saturday at 1 p.m. at Tim Hortons Field in Hamilton.

Lakeshore Catholic product Cole Majoros had a 13-yard catch in the victory over Acadia.

In other football news, former A.N. Myer stars Tre and Tyrell Ford were named to the OUA All-Rookie Team and Tre was named the winner of the Norm Marshall Rookie of the Year Award.

Named to the OUA Second All-Star Team was Holy Cross product Mike Domagala. The Carleton kicker was 14-for-20 in field goals and was second in the league in punting with an average of 42 yards.

Following is a roundup of locals basketball players and how they fared in OUA action last week.

Playing for McMaster, St. Francis product Jelena Mamic seven points and seven rebounds in an 80-52 win over Laurier and six points and three rebounds in a 71-42 triumph versus Laurier.

Saint Paul grad Megan MacLeod had 10 points in York’s 62-40 triumph over Laurier and 13 points in a 69-58 victory against Laurier. For Laurier, Jean Vanier product Sarah Dillon had eight points and four rebounds.

Holy Cross alumnus Alex Trivieri, who plays for fourth-ranked Carleton, had three points in 13 minutes of a 66-36 win over Ottawa and netted eight points in 11 minutes as Carlton thumped Western 71-48.

A.N, Myer grad Tyler Thomson made a long-awaited return from injury by hitting a three-pointer, his only shot, as Western’s men fell 82-61 to top-ranked Carleton.

Brock’s second-ranked men’s basketball team improved to 8-0 on the season by defeating Nipissing 90-57 and Laurentian 71-56. 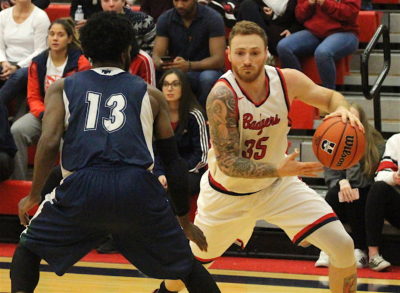 Brock’s women’s hockey team (5-2-2-1) moved into second place in the OUA standings with a 2-1 shootout victory over the Windsor Lancers.

Kimberly Brown scored in regulation time for Brock while the shootout scorers were Maggie Spratt-Mallick, Christina Ieradi and Kat Whiteye with the winner.

Jensen Murphy picked up the win in goal for Brock with 31 saves during the game and another six during the shootout.

Earlier, Brock beat seventh-ranked Guelph 1-0, thanks to a goal by Kiana Tobia and 30 saves by Murphy.

Brock men’s hockey team (4-5-3) sits in eighth place in the OUA West Division after beating Laurier 3-2 in overtime and getting doubled 4-2 by Guelph.

Sammy Banga scored twice in the third period, including a penalty shot, to force overtime versus Laurier where Josh Timpano netted the winner.

Chris Maniccia and Ayden MacDonald scored for Brock versus Guelph.

Niagara’s fifth-place women’s team improved to 4-2 on the season with a 74-40 road romp over the Redeemer Royals.

Niagara’s women’s volleyball team ran its record to 4-1 on the season with a 3-2 victory over the St. Clair Saints in a rematch of last year’s Ontario College’s Athletic Association bronze-medal game. 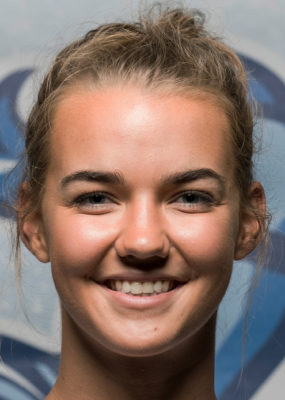 Rachel Rivers led Niagara with 19 kills while another strong performance by setter Melissa McFadden earned her the college’s female athlete of the week award.

The Hannon native sits seventh in the OCAA with 7.73 assists per set.

“Melissa McFadden led the team’s offence this week against a resilient St. Clair team, but she also worked incredibly hard defensively, finishing with a team high 19 digs and was our team’s most efficient server,” coach Nathan Janzen said. “Mel has been setting for less than two years and is tasked with running a complex offensive system. But her commitment and extra work continue to pay off.”

Niagara’s men also improved to 4-1 on the season with a 3-2 victory over St. Clair. 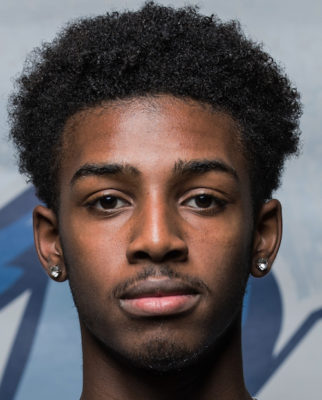 Leading the way for Niagara was Jaydon Milne with 17 kills, three service aces and 13 digs. For his efforts, Milne was named Niagara’s male athlete of the week.