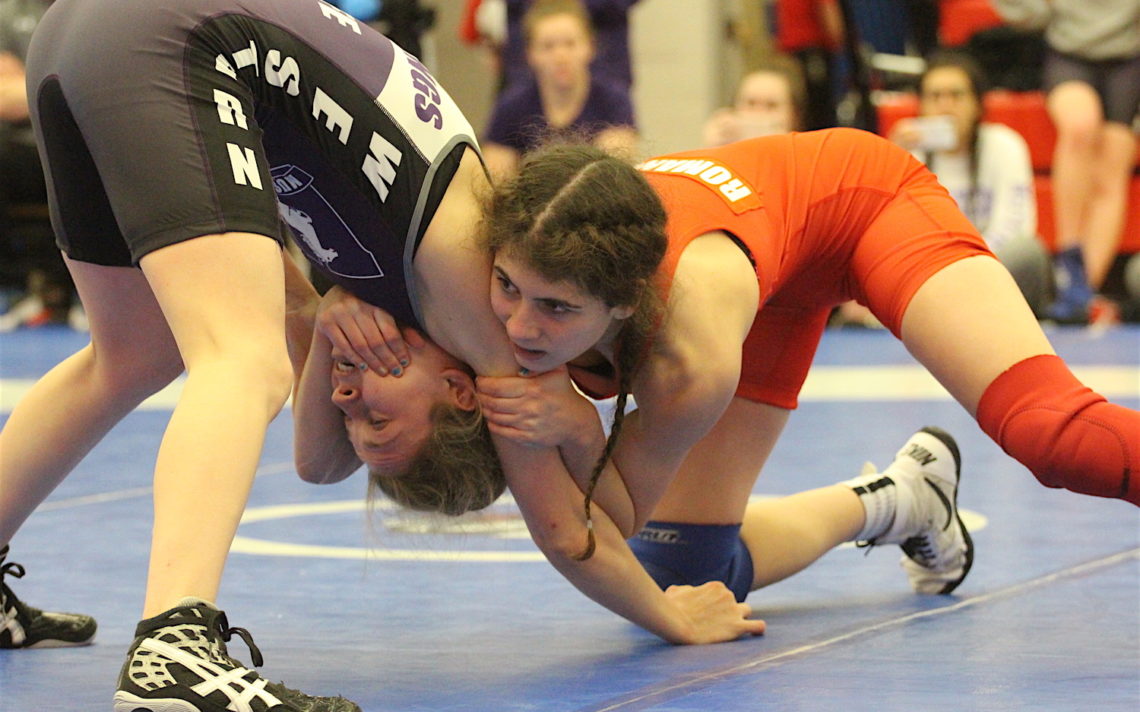 Brock’s girls were golden at the recent Canadian junior wrestling championships in Montreal.

Taylor, who also won silver at the senior nationals, was named the Outstanding Junior Female for the second straight year.

The 19-year-old native of Summerside, P.E.I., won the sixth Canadian title of her already impressive career, including two junior crowns. 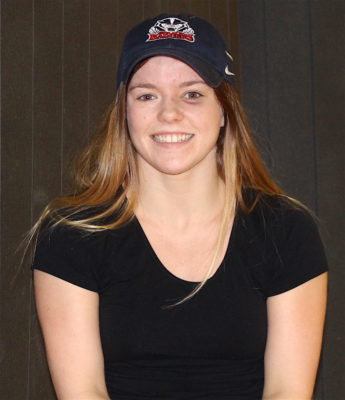 “I was still excited but it wasn’t as big a moment for me,” the 2018 provincial and national university wrestling champion said. “I think it’s because I prepared so much for winning junior and senior that once I won junior, it was ‘OK. That’s one goal accomplished and now what’s next?’ ”

The sports management major won all her matches by technical superiority (match stopped when wrestler ahead by 10 or more points).

“I usually have the biggest category in nationals, but it was very small this year,” she said.

Taylor’s joy at winning another Canadian junior title was tempered by the fact that she didn’t win her first senior crown. She had placed third the previous two years, wrestling senior as a juvenile and a junior.

“It’s nice wrestling up an age category because there’s no pressure other than what I put on myself,” she said.

But Taylor put pressure on herself to win senior this year. She ended up second because she lost to Alexandria Town in the round-robin event. She is 5-3 versus Town in matches this year.

“It is pretty close between us so that was pretty discouraging, but I beat a girl who I had never beaten before,” Taylor said. “It would have been nice to have all the wins because the one person in my weight class that I felt was in my way, I ended up beating her.”

She lost to Town by technical superiority.

“She was ready and I wasn’t. It was more of a mental thing and obviously I made a lot of bad decisions in that match,” she said. “It was a very quick match and she’s unstoppable when she gets going.

“Next time, I need to be ready from the moment the match starts and not halfway through.”

She has much higher expectations this time around at the world juniors.

Competing in a more manageable category, has allowed her to improve dramatically and she’s no longer content at just making junior worlds.”

“If I go out and wrestle my best, I have a good chance at medalling.”

She is going to work hard this summer to make that and her other goals a reality.

“I want to climb the senior ranks and I don’t just want to be a pretty good senior. I want to be the best senior,” she said.

She feels it’s crucial for her to do well at the junior worlds, junior Pan Ams and whatever other junior competitions she attends.

“My goal this summer is to get better and get ready for being a senior next year because that’s a big gap,” she said. “I want to close that gap early on.”

There’s nothing like falling short of expectations to motivate an athlete. 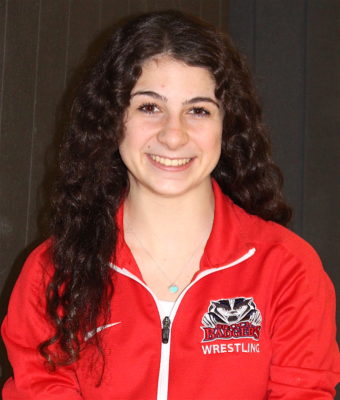 “It definitely pushed me because that year I thought that it was going to be my year as well,” the first-year Brock student said. “I had come off of a pretty bad injury, but I had won OFSAA and I had won provincials.

“It was one of those things that made me want to work even harder to show that I did have what it took that year and that it just didn’t completely show.”

Her gold medal in the 50-kilogram division at the nationals capped an excellent year that saw her win an Ontario University Athletics championship, an OUA rookie of the year award and place second at the USports championships.

“I was expecting to do well and I have been training really hard all year so for me, I was going to go out there, put it all on the line and do the best that I could,” said the silver medallist at the 2017 Canada Games. “I had a really good feeling about it this year because I have great coaches, great teammates and a really supportive family. I was really ready going into it.”

This year was her sixth trip to the national championships and the gold gets added to a collection that includes one silver and three bronze medals.

To win gold, she pinned her opponent with four seconds left in the final.

“I had her on her back and I knew that the round was almost over and when the ref blew the whistle he didn’t tap the mat like they usually do when there is a pin,” she said. “I had no idea that I had pinned her.”

All that changed when she looked at the clock and realized there was time remaining.

“Then it was ‘Omigosh, I have just won nationals. I did it.’ It was a crazy feeling.”

It took a second for it all to set in.

“I looked over at Marty and I was kind of dumbfounded and confused,” Romano said. “I didn’t know what was going on and then I realized I had pinned her. It was instant excitement and instant emotion.”

Her Canadian title has earned her a berth in the junior worlds.

“I’ve been working hard all my life just to get on top of the national podium and missed the world team trials every time that I have tried,” she said. “To get it this year is a really good feeling. I get to experience what it’s like to wrestle girls internationally.”

“It is really great to train with people who are used to wrestling internationally because they have that experience,” she said. “Practising with them is helping to get me to that level of wrestling.”

Her goals for the summer are to medal at the Pan Am juniors and the junior worlds.

Samantha is first in line for what could be a long run of Romano wrestling success.

Nineteen-year-old Caledon native Nicole French made an impressive debut at the junior nationals.

The silver medalist at the 2017 Ontario Federation of Secondary Schools Association championships won gold in the 72-kilogram division. 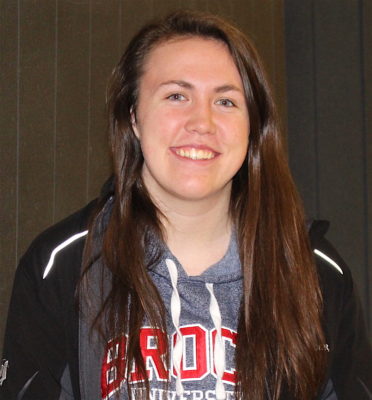 “I was really surprised,” the first-year Brock kineisiology student said. “I have worked hard all year, but it was amazing to go out there and compete and have the support of everyone.”

She went in with rather modest expectations.

“I told myself that I just wanted to win one match and then I ended up winning both my matches and winning gold.”

When the official raised her arm to signify her victory, she was stunned.

“I couldn’t believe it and I was in shock,” she said. “I pinned her and it was like ‘Holy crap.’ It took me a second to realize I had won because I was in a round-robin and not a true final.”

Her win garners her a spot at the junior worlds.

This past season, French came relatively close to making Brock’s varsity team in her freshman year.

“There were two girls that competed for the 72-kilogram spot and obviously I was third in line,” she said. “It’s my first year so hopefully next year.”

Despite being a Canadian junior champion, French knows how difficult it is to crack the lineup of a Brock women’s squad that has won five straight Canadian university (U Sports) championships.

“It’s awesome to be in this room,” she said. “It really humbles you.”

French had no plans to wrestle in university, but her high school coach pushed her to try out for the Brock team.

“I didn’t get my hopes up or anything and I contacted Marty (Calder) over the summer and told him I was interested. He told me to come out and see if I wanted to be a part of the team. I did and I stuck with it.”

She was blown away by the intensity in the wrestling room.

“I was in awe of everyone and the calibre at the beginning. It’s amazing,” she said. “But it’s like a family and they welcome you in. They all know your name and they all treat you like you have been there forever even if you have only been there a couple of days.”

Her short-term goals for wrestling are to take things one day at a time and make progress in the senior ranks next season.

“I know I have a long way to go so obviously long term would be to go to the Olympics,” she said. “We will see if that’s in the plans.