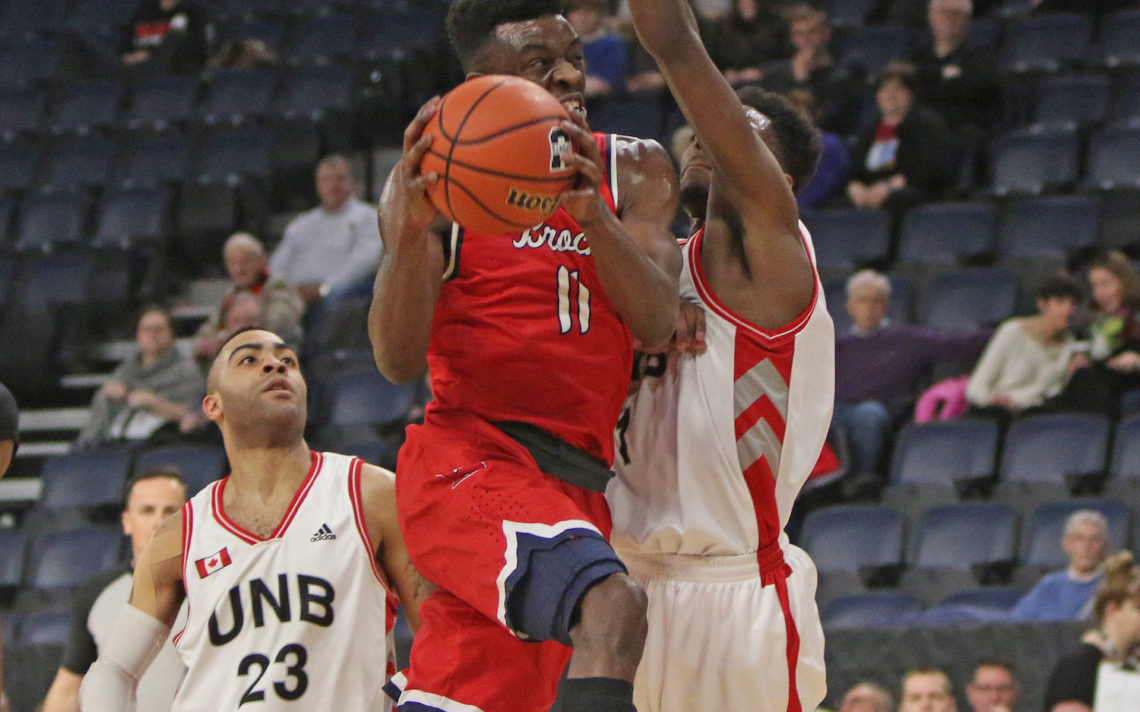 Brock’s Johneil Simpson had a fantastic showing at the national championships, averaging 29 points and 10.7 points to help the Badgers win the consolation title. Photos special to BPSN by DAN DAKIN.

The Brock men’s basketball team returned from the national championships in Halifax with the consolation title and some valuable lessons for when it returns.

“We have to relax and enjoy it more,” Brock head coach Charles Kissi said. “There was so much stress and pressure put on trying to win that first game that we forgot to relax and play basketball.”

Kissi admits that is not an easy thing to do in your first appearance at the nationals.

“It’s incredibly hard not to do it, especially with those young guys,” he said. “You want them to be successful so badly and you saw what happened when we were sort of relaxed.

“We played so much better, the guys were loose and we were having so much fun out there. That is when we are at our best.”

Kissi will also try to enjoy the experience a little more as a coach.

“They were ready to play,” he said. “We just had to get rid of the nerves.”

Calgary ended up defeating Ryerson in the championship game, but afterwards Kissi had no what ifs?

“We can’t do that,” he said. “We liked our side and we knew if it was us or Calgary that won, that we would have a really good chance.

“There are no what ifs? Just lessons.”

There was also the experience gained.

“Experience matters,” Kissi said. “Calgary had been in a national final before and they had been in the tournament before. It makes a difference.”

That’s why it was important for Brock to put aside the opening loss and focus on winning its next two games.

“Getting those three games was crucial,” Kissi said.

Fourth-year guard Simpson was spectacular in the tournament, averaging 29 points and 10.7 rebounds per game.

“If there is a word great than that (spectacular), write that one down,” Kissi said. “He was unbelievable and it was a coming out party on a personal level.

“He had something to prove, but more than anything, he wanted to help his team be successful.”

Simpson continuously improved all season. Always a great shooter, he learned to attack the rim and was unstoppable in Halifax,

“He had some spectacular moves and great footwork and he put his whole game on display,” Kissi said. “That was nice to see and it was something we have been asking of him all year.”

The nationals also saw star Dani Elgadi end his career as a Brock Badger. Elgadi’s numbers at the nationals pushed him into second place all-time for points and rebounds.

“It’s bittersweet but he has to move on at some point,” Kissi said. “It’s time for him to move on and take the next steps in his life and his career.

“There’s no piece of me that wishes he was back one more year and every piece of me is excited for what lies ahead for him.”

Work on returning to the national championships will begin shortly for Kissi. His returning players will get a rest and he will focus on being a dad again and put the finishing touches on the master’s degree he is working towards.

“I will take the next couple of weeks to decompress a little bit, but the recruiting is ongoing and all the other aspects of the program, besides on court, will continue on.”

“We are really close to getting a couple of guys who will be tremendous and they will be real solid, impact players for us and help us get back here (nationals) next year,” Kissi said.

He likes the way his program is structured. The team loses Elgadi and Trevor Thompson to graduation this year and will lose Simpson and Cassidy Ryan next year.

“All the other guys will continue to get experience and we will never lose more than two or three at a time,” he said. “We were one of the few teams that had a first, second, third, fourth and fifth-year player in our starting lineup.

“Every year, we will continue to add pieces that can potentially add value.”

One local player that Kissi does have an interest in — and the interest is mutual — is St. Francis star Tyrell MacLennan.

“Now that my team is done and I have a minute to sit down and breathe, Tyrell is someone we will bring in and sit down for sure,” he said.

Kissi wants to get a lot more involved with Niagara players.

“We really have to figure out how to get more hands-on with the local talent in a way that can help get them to this level, whether it’s Brock or otherwise,” he said. “If we continue to have waves and then nothing, I’m not sure that is the way to go.

“We have to find a way to develop gems in every class.”

Kissi hopes to start working with some of Niagara’s best younger players this summer.

“We are going to do some individual sessions and it will start in May,” he said. “I don’t care what clubs or teams they play for. We are not overly interested in coaching teams.”