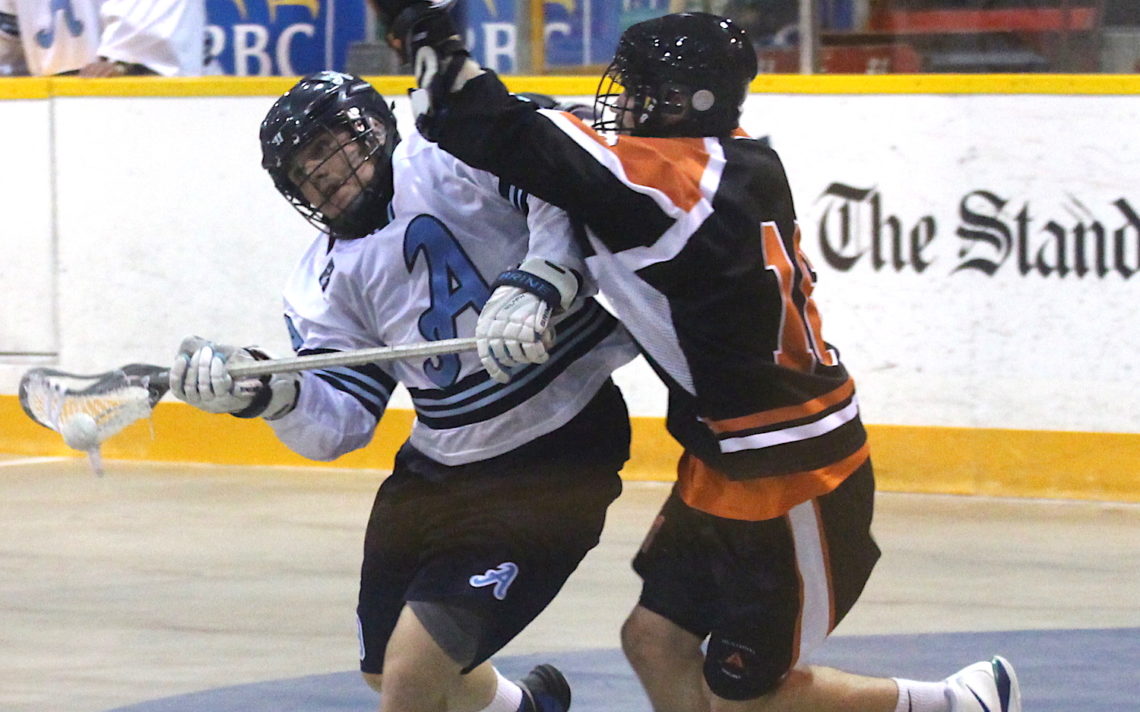 A little extra effort was all it took for Alex Simmons to get the job done.

Simmons collected his own rebound and scored the winning goal while sailing through the air as the St. Catharines Athletics topped the Six Nations Arrows 6-5 Sunday night at Jack Gatecliff Arena to sweep their Ontario Lacrosse Association junior A best-of-five playoff series 3-0.

It was the first playoff series win for the A’s in a decade.

Simmons, who had been held scoreless, couldn’t have picked a more opportune time to find the back of the net. His goal came with 6:03 remaining and just 42 seconds after Jeff Wittig had tied the game 5-5.

“It was great,” Simmons said with a smile after shaking hands with the defending Minto Cup champion Arrows. “They played great defence on us all night, but to get that one in, it was the whole city of St. Catharines lifting them up.”

Simmons said the A’s fed off the energy of 572 fans cheering them on despite sweltering conditions in the arena.

“The atmosphere was great. It’s the greatest feeling. I’m so glad we had this crowd behind us the whole time.

“This is one of the most historic cities for lacrosse and it was great to see them come out and support us.”

Simmons, who had seven goals and 11 points in the first two games of the series, finished with four points.

“That was a goal scorer’s goal.”

The series win was another indication the organization is back after a rough decade. 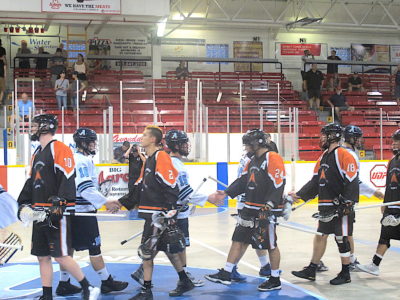 “I don’t think it’s completely sunk in yet for myself,” A’s general manager Jeff Chcoski said. “I’m really proud of the guys and the steps we’ve made to be able to move on to the second round.

“I’ve been saying all year it’s a learning curve and we’re a little bit ahead of the curve, which is amazing. We’re just going to stick to the plan and see who is standing there for us by the end of the week.”

Toll chalked up the win to hard work.

“We played hard and battled and stuck to the game plan,” he said. “The boys didn’t panic.

“The character in the room showed with those big goals by Wittig and Simmons.”

Toll said the series can only help the A’s down the road.

“Every time you play in a big game, you get better and better at them. We’re just trying to play as many big games as possible and keep it rolling.”

The A’s built a 3-1 lead after 20 minutes on goals by Rylee St. Onge, Alex Pace and Wittig.

Jeremy Bomberry replied for the Arrows.

The Arrows came back on goals by Koby Whitcomb, Travis Longboat and Devon Buckshot to tie the game 4-4 after two.

Mario Caito had the lone goal for St. Catharines.

Owen S. Hill gave the Arrows a 5-4 lead, setting the stage for the heroics by Wittig and Simmons.

The A’s will likely start their next series by the weekend.

A’s acorns: Latrell Harris was named to the OLA first all-star team and goaltender Nick Damude was named to the second team . . . Harris is currently with Team Canada at the World Field Lacrosse championships in Isreal . . . With Harris away, Alec Tamas is wearing the captain’s C  . . . Liam Ham, Tanner Vail and Jake McNabb were also scratched for St. Catharines.