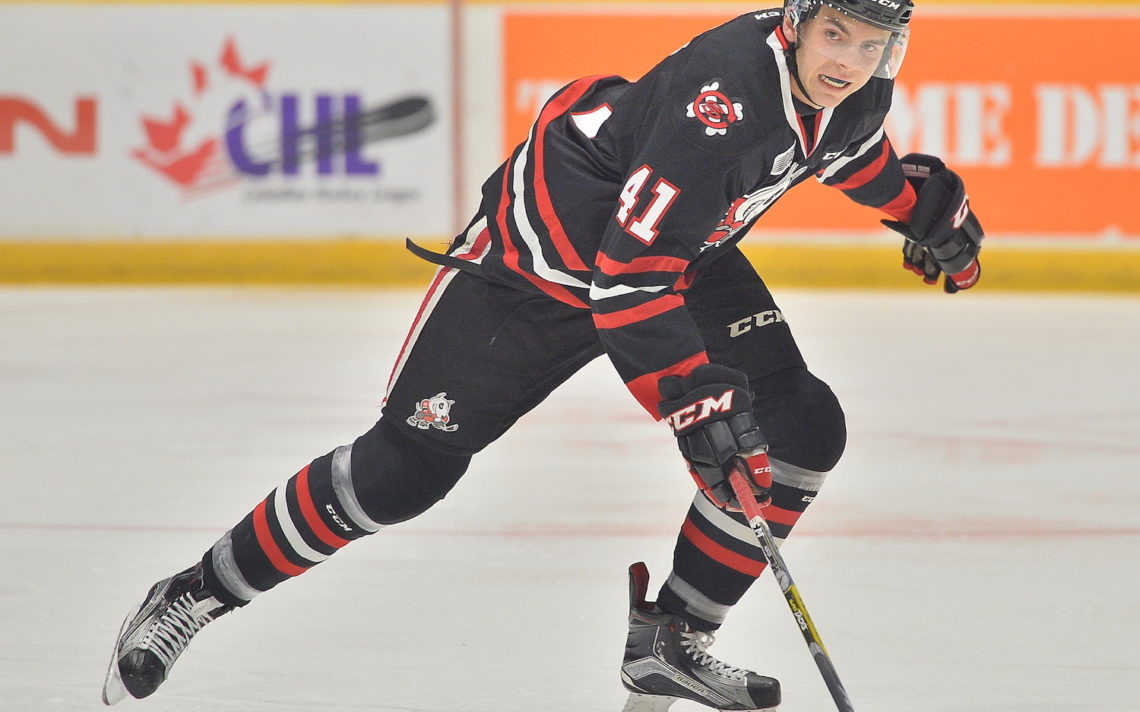 The Niagara IceDogs dropped an 8-3 decision to Kingston Sunday afternoon at the Meridian Centre. PHOTO BY: OHL IMAGES.

The Niagara IceDogs’ five-game winning streak came to a screeching halt at the hands of the Kingston Frontenacs Sunday afternoon at the Meridian Centre.

The Frontenacs scored early and often en route to an 8–3 victory in Ontario Hockey League action.

Kingston raced out to a 3-0 lead after one period and built a 6-1 lead after 40 minutes.

“You never want to get down early to anybody,” IceDogs coach Billy Burke said. “I thought the guys were ready to play and played hard. We had chances, but we had a couple of breakdowns in the offensive zone and that led to rushes up ice, and they have some high-end scorers who will make you pay.”

The IceDogs had a strong start to the second period and made it 3-1 before the Frontenacs regrouped and scored three times in a span of about five minutes.

“We think we can match up with these guys,” Burke said. “Obviously, they are older and, on paper, deeper.

“We’re not scared of anybody and we came out hard and hitting.”

The IceDogs didn’t back down, but did have trouble containing Kingston’s lineup, which is one of the biggest in the league.

With Willy Lochead and Liam Ham out of the lineup, the IceDogs called up Daniel Nardi from the Fort Erie Meteors of the Greater Ontario Junior Hockey League to round out the defence. Nardi, a 16-year-old Newmarket native, was a ninth round selection of the IceDogs in the 2017 OHL draft. He has three goals and 22 points in 33 games for the Mets.

“I thought Nardi did a great job,” Burke said. “Throwing him in against of the best teams in the country, he looked good. It’s really exciting for the future.”

Ice cubes: Lochead (upper body), Ham (ill) and Bradey Johnson did not dress for the IceDogs . . . Jacob Paquette, Sam Field, Justin Pringle and Tyler Burnie were scratched for the Frontenacs . . . The Frontenacs feature seven NHL picks on their roster.

Kingston: Gabriel Valardi (1) from Conor Ali and Linus Nyman at 6:35.

The Fronts came out throwing their weight around early  . . . Over six minutes in, each team had just one shot on goal . . . The IceDogs struggled to generate any offence early on  . . . Niagara forward Oliver Castleman left the bench with an upper body problem about eight minutes to play and did not return . . . There were no penalties called . . . Kingston held a 13-4 edge in shots.

Niagara: Danial Singer (19) from Akil Thomas and Elijah Roberts at 6:15 on the power play.

IceDogs goaltender Stephen Dhillon made an acrobatic save with his back to the slot early on . . .  Nyman rang a shot off the post about five minutes in . . . IceDogs captain Johnny Corneil had a great chance from the slot just after Singer’s goal, but was turned back  . . . Ben Jones came up empty on a clear breakaway while the IceDogs were shorthanded just before Robertson scored . . . Niagara’s Adrian Carbonara took an unsportsmanlike penalty after almost scoring and the Fronts capitalized 14 seconds into the penalty  . . . Niagara outshot Kingston 19-14.

Kingston: Neumann (12) from Jakob Brahaney and Eemeli Rasanen at 12:32 on the power play.

Colton Incze replaced Dhillon in goal to start the third period . . . Day was shaken up early in the period after crashing into the boards, but returned . . . Thomas assisted on both goals in the period and had three helpers overall . . . Maksimov was given a major and game misconduct for a check to the head of Conor Ali . . . Kyle Langdon of the IceDogs was given a 10-minute misconduct late in the period.

Up next: The Erie Otters visit Thursday and Barrie Colts Friday.