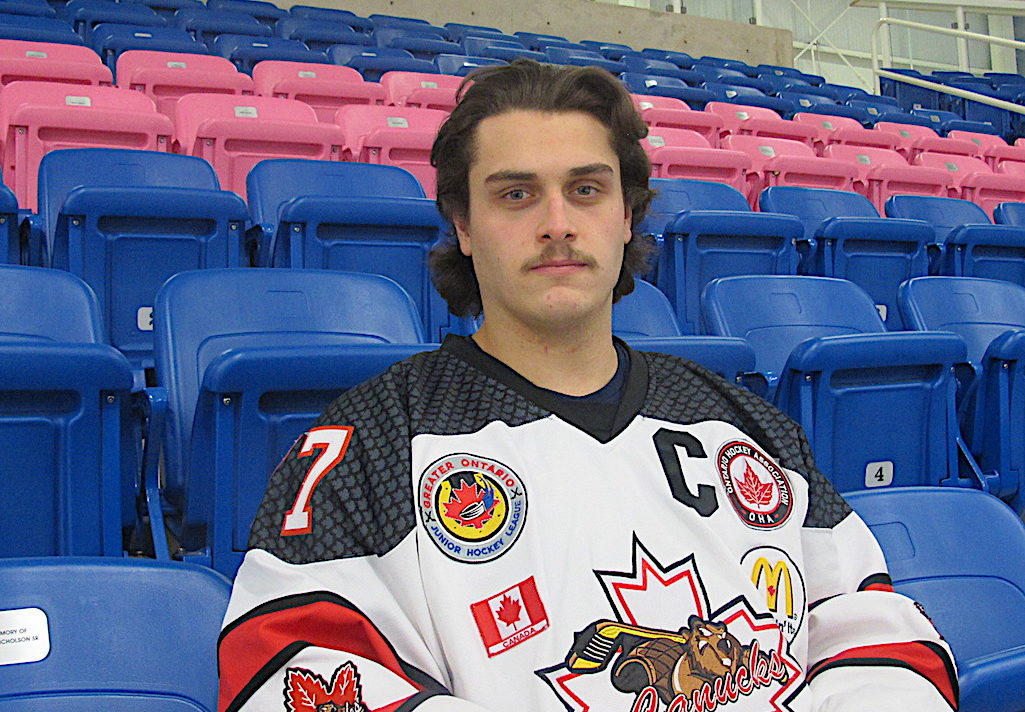 The leadership of the Niagara Falls Canucks is in good hands with Andrew Barbeau.

The 20-year-old defenceman is in his second season as captain and Canucks head coach Frank Pietrangelo can’t think of anyone more qualified to wear the C.

“He’s such a great leader. In my tenure here, he’s been the best captain we’ve had,” Pietrangelo said. “His leadership qualities are tremendous. He holds people accountable. It shouldn’t always have to come from the coach. Sometimes it has to come from the players and he’s got that.

“On the ice, he quarterbacks our first power play and leads our defencemen in minutes but it’s more than that. It’s the off-ice stuff as well.”

Barbeau, a native of Sault Ste. Marie, comes by his leadership skills naturally.

“It started when I was young,” he said. “My dad was a basketball player and he was always a leader on and off the court. He’s a really big influence when it comes to me being a leader.”

Barbeau is a classic combination of a leader who doesn’t mind speaking his mind, but also leads by example.

“I like to think my work ethic on the ice is a big factor,” Barbeau said, when asked why he thinks he is a good leader. “If you’re practising hard then the rest of the boys will follow you and work hard. Off the ice, it’s making sure everyone is level headed and that no one thinks they are above anyone else. That’s a big thing in the room.

“It comes down to character and how much you want it. People just follow you through that.”

Pietrangelo loves that Barbeau will speak his mind.

“It’s not an easy thing to learn as a young age,” Pietrangelo said. “Barbs is more of a vocal guy. You can’t just go pipe your mouth off and then not do things the right way yourself.

“You have to lead by example and he does that very well so the guys follow that. He does a lot of stuff where I don’t have to. I’m sitting in here (office) and I listen to what he says and don’t have to repeat what he says.”

Pietrangelo said it’s important a coach not try and pigeonhole a captain to be a certain type of leader.

“Everybody’s leadership qualities are different. Some guys are quiet leaders. I played with Mario Lemieux and he was a quiet guy. His leadership was more what he did. When the team needed him he’d perform.

“Every year you have a different captain and they are all different. You just can’t put someone in that position and say you’re a rah-rah type of guy if that’s not your personality.”

Barbeau said the fact the Canucks have bonded off the ice has made his job easier.

“A lot of the boys are coming together and clicking better than at the beginning of the year,” he said. “We lost those two games back to back in St. Cathariens and that was a wake up call.

“They’re starting to gel in the room and hang out off the ice which is good. I like to see that.”

Barbeau’s junior career is coming to an end and he is hopeful of a long playoff run.

“It’s been a long time since I’ve made a run. I would love to do that here and win a Sutherland Cup and have a couple rings to show my kids when I’m older.”

Pietrangelo knows Barbeau will be tough to replace.

“I’ve been here in the past where we’ve had talented captains but they were lazy and tried to preach things and then turn around and didn’t do things themselves,” Pietrangelo said. “We’re going to miss him when he’s gone.”

The Canucks, 16-6-4-2, are in the thick of a tight four-way race for first place with Caledonia, St. Catharines and Ancaster. The four teams are separated by just three points.

Niagara Falls dropped a pair of close games last week, a 2-1 decision in overtime to the Corvairs, and a 1-0 loss to the Avalanche in double overtime.

“We’ve been playing so well,” Pietrangelo said. “These things are going to happen. They are good hockey teams. It’s not like we went out and laid an egg and lost 6-1 to an eighth-place team.

The Canucks host Pelham Friday and are in Pelham Sunday at 2:30 p.m.