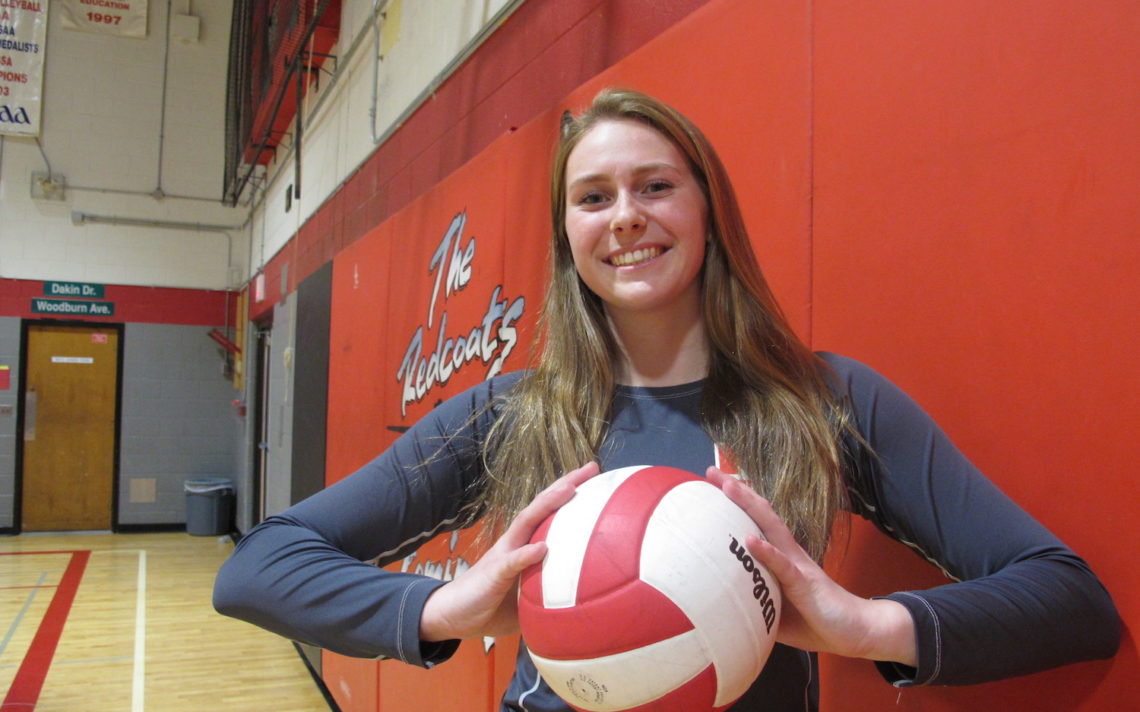 Shooting for the top

Sadie Dick is all volleyball, all the time.

The 16-year-old, Grade 11 student at Governor Simcoe eats, sleeps and breathes the sport, day in and day out.

Toss in working hard to maintain her grades and that pretty much sums up Dick’s day-to-day existence.

“This is pretty much my life,” Dick smiled. “I like going home knowing I have practice and not having nothing to do.”

It’s hard to imagine Dick having nothing to do.

Apart from her studies, she is a member of the 17U Niagara Rapids Legends club team and also is enrolled in the Team Ontario Elite program.

“We do three training sessions throughout the year on weekends. At March break we are going to train and play in France. It’s very exciting,” she said.

And if that wasn’t enough, last summer Dick played for the 16U Canadian National Team. She trained in British Columbia and competed in Florida for the High Performance championships.

It was an experience she will never forget.

“It was an amazing feeling. Just walking around with the flag on my chest was unreal,” Dick said proudly. “We would walk around and people would say ‘There’s Team Canada’ and it felt so good. I felt so good to say that I played for my country.”

The national team played mostly Under 18 Canada Games provincial teams  as well as squads from the United States and other countries.

“It was awesome,” said said.

Dick said the experience quickly made her realize how much talent there is out there.

“It’s crazy. You go from your club team and being probably the best player and you’re average,” she said. “It’s amazing to compete and play with better girls. The amount of improvement I made playing with girls of a higher level was insane. It was amazing.”

What’s amazing is Dick’s path to her current level.

She started playing the sport in Grade 7 at Lincoln Centennial Public School in St. Catharines where she was noticed by current Simcoe junior volleyball coach and elementary school athletic co-ordinator John Haeni, who was then refereeing and suggested she try out of a club team.

“I started playing and really enjoying it and a couple of years later made Team Ontario,” she said.

Nevertheless, Dick insists she wasn’t a star right off the bat.

Dick’s immediate goal is to play for the 18U Team Ontario squad this summer while down the road a volleyball scholarship and another chance to play for Canada, this time at the Olympics, are what keeps her motivated, both on and off the court.

“I’m working on high performance training. Weight lifting and making sure we get stronger and training almost every day of the week. I have about one day off a week and then we have tournaments on the weekends,” she said. “I’m just trying to work really hard but also trying to keep my student side on it and keeping my grades up. I think I’m doing really well so far. It’s getting difficult but I love it so much I have to make the sacrifices.