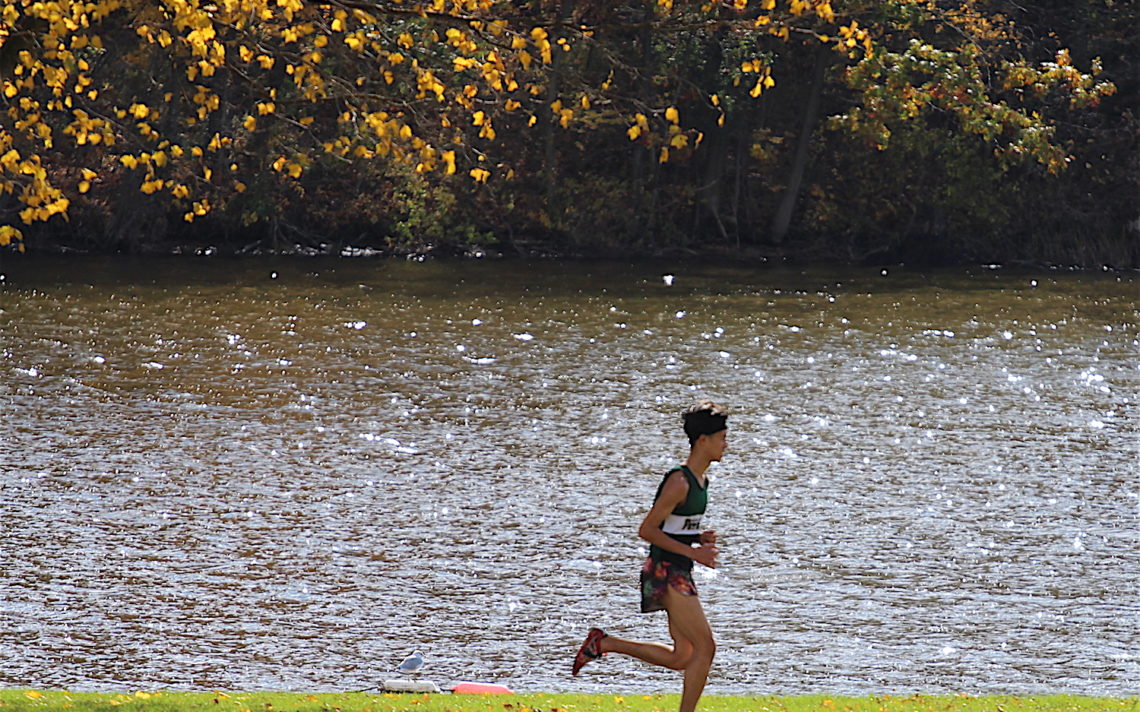 “I felt good,” the 17-year-old said. “It was really nice out there and not as windy so we could go a lot faster.” 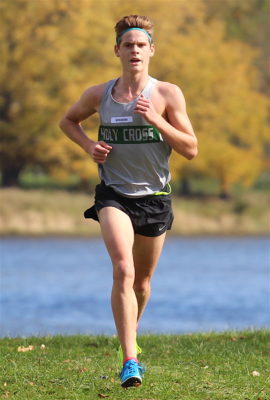 His plan was to stick with the lead group until the end of the race but that changed mid-race.

“I was feeling really good and some of the boys seemed to be slowing down so I decided to make my move,” Lee said. “It seemed to work out.”

It certainly did as he won the race by almost 43 seconds.

The victory gets him one step closer to redemption. Last year, he had a head cold going into the Ontario Federation of School Athletic Associations championships and had a disappointing result.

“I’m really excited for OFSAA and I feel like I have a really good chance if I stay healthy. I want to have a good race there,” the Niagara Olympic Club member said. “I want to medal and it has been a goal of mine all summer.”

Lee had a great summer making the 1,500-metre final at the junior nationals in Ottawa.

“That was a big eye opener and I realized I could complete with some of the top guys in the country,” the Grade 12 student said. “It was really inspiring.”

The 16-year-old E.L. Crossley student won last week’s senior girls division at the Zone 3 and 4 cross country meet by more than a minute and 37 seconds and was equally dominant at Thursday’s SOSSA championship winning by almost a minute and 57 seconds. 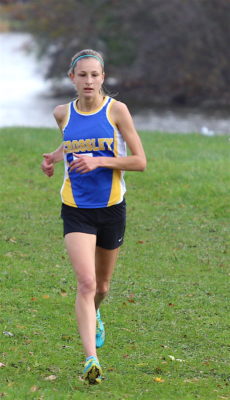 Running by herself means she has to focus on other things because there are no competitors pushing her to go faster.

“I put something in my mind — normally it is something that I am looking forward to, an event or something — and I focus on that,” the Grade 11 student said. “I also think about my team, how our future will go and how we will do.”

On Thursday, she was thinking about her brother Henry and a cross country meet he was competing in.

She also tries to focus on improving her time as evidenced by Thursday’s solitary sprint to the finish line.

Last year, Knafelc placed fifth at OFSAA in the junior girls division and has no expectations for her first year as a senior at the provincial championships.

“I have no sense of how I will do,” she said. “I am going to look up some results from previous races.”

Knafelc’s dominance in running is a bit of a surprise considering she doesn’t run for a club. She is focusing on competitive soccer.

“I would like to see where soccer is going to take me first and if there’s no options there, maybe I’ll think about it,” she said. “But soccer is my priority.”

MOVING UP AND MOVING ON

The Grade 9 student at Sir Winston Churchill was moved up to compete in the junior boys division of high school cross country and he followed up his victory at the Zone 3 and 4 championships with a gold medal Thursday at SOSSA. 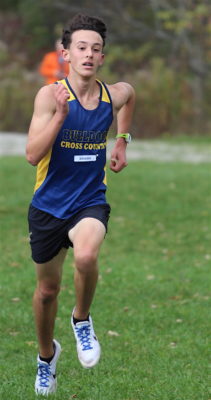 “At first I was a bit nervous, but after a couple of races I started to get comfortable,” the 14-year-old said. “Now I am here.”

He couldn’t put into words what it meant to capture his first SOSSA crown.

“My mind is still blown,” he said. “All these guys are amazing runners and most of them are older than me.

“The training paid off and it feels really good.”

Even though he’s a year younger, he’s still hoping to do well at OFSAA.

“We will see what happens,” the Niagara Olympic Club member said.

That approach is also what he will do as he pursues his long-term running goals.

“I am hoping to improve every year and who knows, maybe I will get a scholarship.”

Brenna Ainslie won the SOSSA meet last year as a midget and placed second Thursday one level up.

The extra two kilometres of distance in the junior girls race compared to the midget girls race is something she wants to use to her advantage. 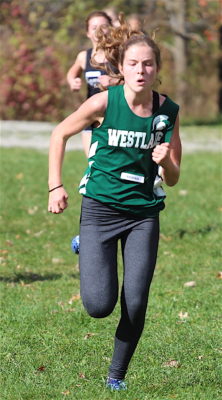 “It’s 5k this time instead of 3k so it gives me more time to catch up from behind,” she said.

The Grade 10 student at Westlane is hoping to improve on her performance last year at OFSAA.

“I have no idea how I did,” she said. “I didn’t do too well. Hopefully I will do better this time around.”

She has no specific goal in mind for OFSAA as far as where she wants to finish.

The Niagara Regional Athletics member is taking her running career one year at a time.

It took Owen Lockyer a single year to top his dad’s best performances at the SOSSA cross country meet.

The Grade 9 student at Eden did that by finishing first at the SOSSA meet Thursday in the midget boys division. 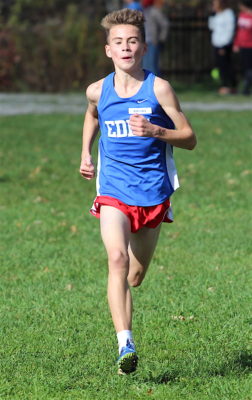 “I told him at the finish line that he had did something that I had never did,” father Jeff Lockyer said. “I never won this race. I had two seconds and a third.”

Owen set the DSBN elementary school cross country records in Grades 6, 7 and 8. The Grade 6 record has been broken but the other two are still standing.

Youngest sister Addilyn holds the records for Grades 4 and 5.

“She’s looking up to her big brother plenty,” Jeff said.

Dad said it’s more than genetics that makes his son a great runner.

“He has great natural ability, but he definitely has the personality for it,” Jeff said. “It takes a certain type of personality to want to train, to want to make sacrifices and be disciplined. It’s structured that way and he’s certainly wired that way.”

The 14-year-old credits his father for his running success.

“I’ve accomplished everything because of my dad,” he said. “He’s my coach and he inspires me every day.

“He made me a better runner by pushing me.”

Owen won the Zone 3 and 4 meet at the NRHSAA level and overall. He has been running for the past four years and is about to switch to Niagara Regional Athletics from the Trailwind Track Club.

He trains six times a week and he has set his sites high for OFSAA.

“It’s my first OFSAA so you never know. but a medal would be amazing and a top 10 finish would be great.”

Long term, he wants to run at the next level.

“I’m hoping running can be a way to get into university and then we will see how it goes,” he said.

Jeff ran for the University of Toronto and represented Canada as a senior at the world cross country championships in 1992 in Boston and in 1996 in South Africa.

One week after finishing second at the Zone 3 and 4 cross country meet, Alissa Mete managed the same feat Thursday in the midget girls division at the SOSSA meet. 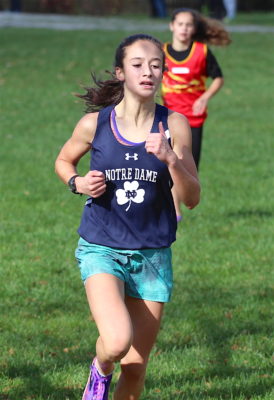 “I just went out there and tried to give in my all,” the Grade 9 student at Notre Dame said. “I really wanted to get to OFSAA and I knew if I stayed in the lead pack, I would have something at the end and I did.”

The 13-year-old also plays basketball for her high school and travel basketball with the Pelham Panthers.

“It’s great cross training,” she said of her running.

With her second-place result, Mete advances to OFSAA Nov. 4 in Petawawa.

“It’s my first OFSAA so I want to try my best and stay near the lead,” she said.

Mete has won the Niagara Catholic Athletic Association elementary school cross country meet for her family of schools since Grade 4 and has been also in the top three at the board level.

“I’ve been training with Edge Triathlon and I’ve been doing lots of cross training with swimming,” she said. “And my coach (Jeff Scull) is really good.

Following are the winners from Thursday’s SOSSA meets, local runners that placed in the top five, local runners who qualified for OFSAA as individuals, and scoring members of the top two teams that advanced to the OFSAA championships Nov. 4 in Petawawa.