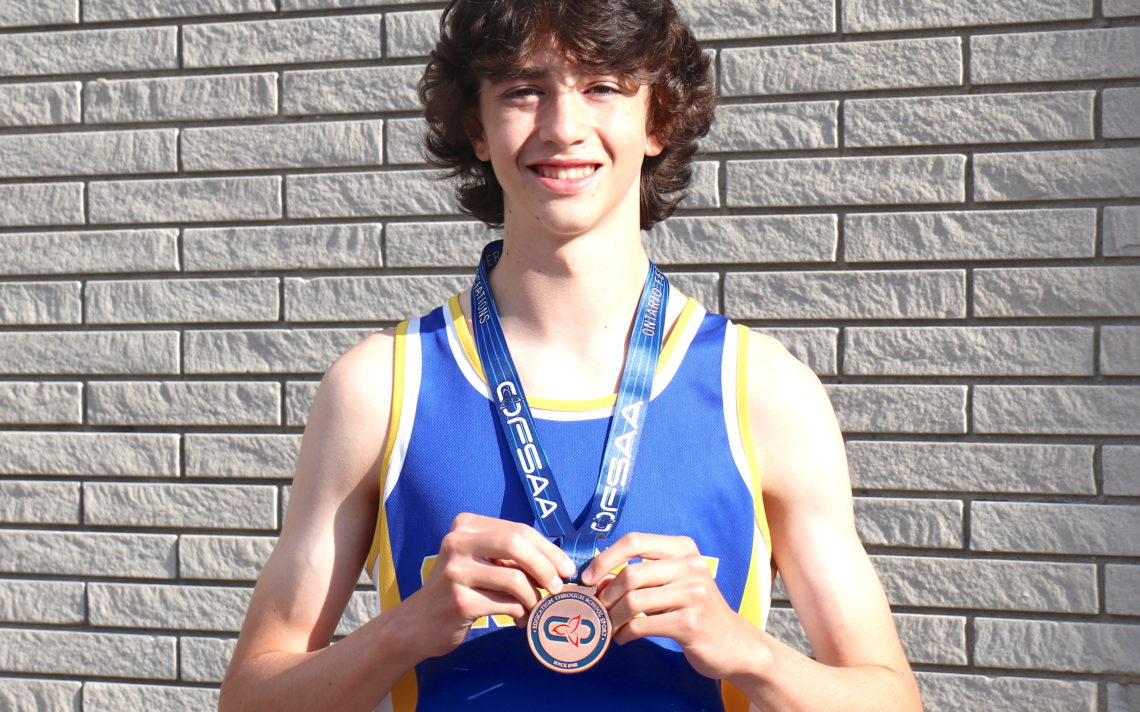 It was a satisfying moment for Ryan Zucco when a bronze medal was hung around his neck at the Ontario Federation of School Athletic Associations track and field meet.

The Grade 9 student at E.L. Crossley captured bronze in the novice boys high jump with a personal-best competition jump of 1.75 metres. Zucco was the only competitor to clear 1.75 on his first attempt, putting him in the lead at one point, however, two other competitors later went on to clear 1.80 metres. Two days earlier, Zucco had jumped 1.80 metres at practice.

“It felt good to know that all the hard work that I had put in had paid off,” the 15-year-old North Pelham resident said.

The Thorold Elite Track Club member battled through some issues to mine OFSAA bronze.

“I didn’t feel the best that day because my sinuses were acting up. It happened at OFSAA for cross country as well when I had a sinus infection on the day of the meet.”

“I knew some of the guys from South Regionals so it was kind of comforting because I could talk to them and stuff. All the guys were very sportsmanlike and we were all cheering each other on.”

He attributed his success to hard work and one other factor.

“It was also mentally thinking about it and trying to not be scared of the bar,” he said. “Sometimes the bar can be a little intimidating when you are jumping at your own height almost. But when you think about it, it is just a bar.”

Zucco draws his motivation from friends and relatives.

“All my friends are really good athletes and I think why I am doing track and all the other stuff is because of my cousins. They (Lisa and Danny Gearing) were really athletic and I kind of want to be like them.”

“Flying through the air is a nice feeling.”

He is aiming high in the sport.

There are also plans to diversify.

“I am going to try and do the steeplechase because I have always been in distance events.”

Thorold Elite coach Steven Fife is looking forward to watching Zucco compete at the NXT CHAMP Invitational in Toronto later this month, the Athletics Ontario championships at the end of July and the Legion Nationals in Quebec at the beginning of August.

“If Ryan can be jumping consistently over 1.80 by the end of the summer and maybe even over 1.85, that should put him not just at the top in the province but also looking at being a contender for the medal at nationals and that would be a huge goal to work towards.”

Zucco started track and field in Grade 3 and began competing in high jump when he was in Grade 4.

“I really liked and ever since then I competed in it in elementary school until COVID kind of shut everything down. I am really glad that I was able to pick it back up again in Grade 9.”

While a Grade 6 student at Wellington Heights, he earned a silver medal in the peewee boys high jump District School Board of Niagara meet. Fife send him a card that spring and met up with him again last fall during the cross country season.

“I had no idea that he was someone I had previously seen until he told me ‘I think you gave me a card back in Grade 6’ and after that, then I remembered. He definitely wasn’t quite as tall back then. But I guess it was just meant to be.”

Zucco ended up joining the Thorold Elite Track Club in March and did a combination of running, throwing, hurdles, and high jump in his inaugural high school season.