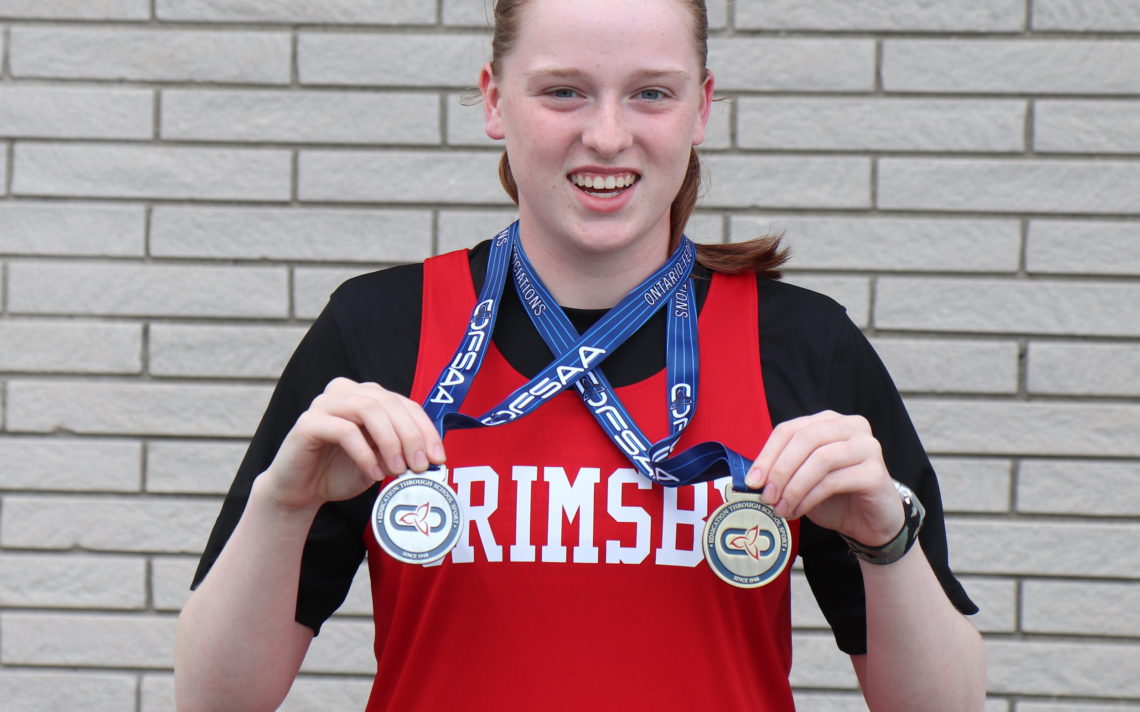 Coco Van Nynatten had an impressive debut this spring in high school track and field.

The Grade 9 student at Grimsby Secondary School made it all way to the Ontario Federation of School Athletic Associations championships and reached the podium in two events. Her throw of 35.08 metres in the novice girls discus earned her the gold medal and her toss of 11.76 metres in the shot put was good enough to garner a silver medal.

“For discus I did pretty well. I was one centimetre off my PB (personal best) and all of my throws were better than anyone else’s,” the 15-year-old West Lincoln resident said. “For shot put, I did OK but it wasn’t a personal best. I still did pretty well.”

The Thorold Elite Track Club member was thrilled with her success at OFSAA.

“I was really when I happy when I found out that I had won, especially the shot put because there were a couple of people there who were really good and were beating me at some point in the competition. Then I finally got a really good throw and ended up second.”

Van Nynatten was aiming high when the season started.

“I expected to do very well in discus because, from the first time I started throwing, I have been getting first and I have been throwing 10 metres farther than everyone else. For shot put, I was doing pretty well but when I got to SOSSA (Southern Ontario Secondary Schools Association championships), there were girls who were really close to me and I had to fight for my spot.”

Her success was the result of hard work and preparation.

“I have been training really hard and before all my throws I usually stretch out my arms and stuff so that I am ready right on the spot. I am ready to perform well in the circle which really helps.”

She has no plans to rest on her laurels.

“I am going to continue training and working hard.”

Her goals for the summer are results oriented.

“For discus, I have thrown 37 (metres) in practice a couple of times now and I want to eventually get that this summer in competition. For shot put, I am hoping to get over 12.10.”

Van Nynatten was a competitive dancer for 10 years before the COVID-19 pandemic shut down the studio she attended. She looked elsewhere for a sport to stay active and started training for basketball. Then the pandemic put an end to her hoop dreams and Van Nynatten cast her eyes towards track and field.

She was a high jumper in elementary school but was more than happy to compete in throwing events when Thorold Elite coaches Fife and Kelly Saldutto pointed her in that direction.

Last summer as a Grade 8 student, Van Nynatten had throws in discus and shot put that would have earned her a berth at OFSAA. She finished the season with personal bests of 11.74 metres in the shot put.