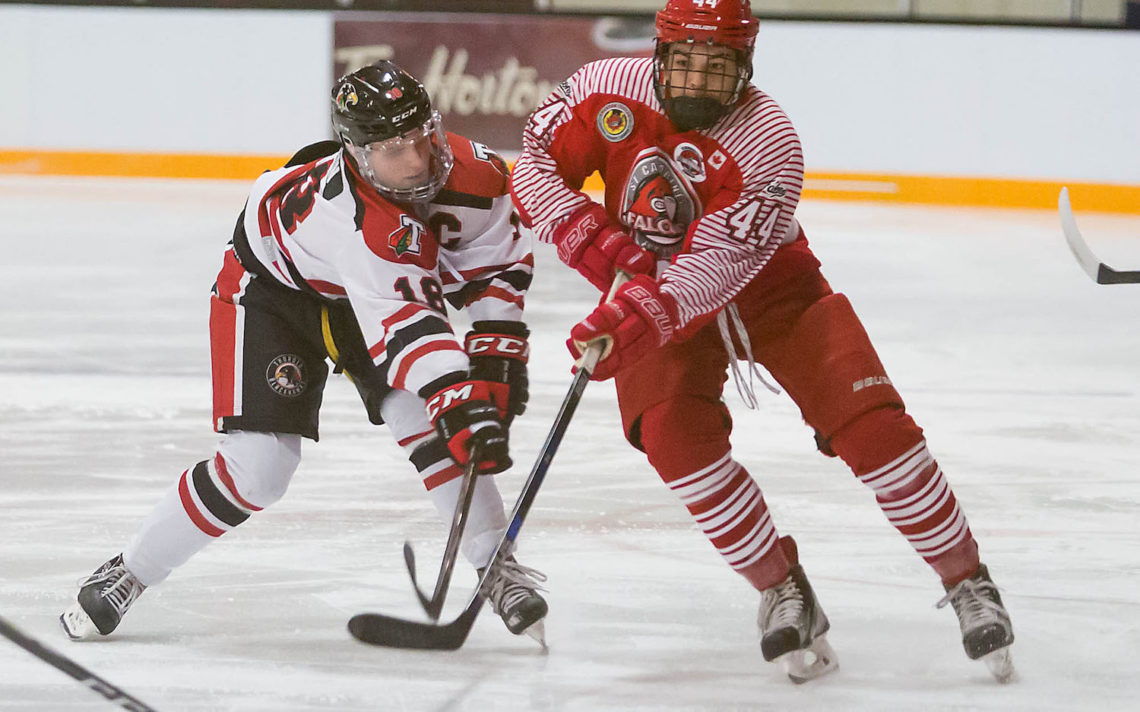 The St. Catharines Falcons made it six wins in a row with a 10-4 win over the Thorold Blackhawks Thursday at Thorold Arena. PHOTO BY: COLIN DEWAR

Zach Lawrence brings a level of consistency and reliability each time he steps on the ice for the St. Catharines Falcons.

The 19-year-old forward is a solid, two-way winger who can also kill penalties and chip in on offence as well.

The win extended the Falcons’ win streak to six games. Overall, St. Catharines lead the standings with a 7-1 record.

Lawrence, who played for the Ancaster Avalanche last season, now has three goals and seven points in his first eight games for St. Catharines.

“I was going to leave to go out west but then I talked to St. Catharines and thought it would be easier just to stay at home and play,” Lawrence said. “It’s been a breeze so far. Everyone has been super nice and welcomed me with open arms. I remember my first practice guys were coming over to me and taking their gloves off to shake my hand.”

Lawrence said the Falcons simply told him to continue to play his game and he would fit it with the club.

“Consistency is what wins championships and being able to rely on guys night in and night out and I think we have a lot of guys, a good core group of guys who bright it every night,” he said.

“He’s a really hard working kid,” Fitzgerald said. “I’ve been really happy with him. He creates a lot of space (for line mates Hayden Broomhead and Tanner Ferreira) and he chips in. I know what I’m going to get out of him and he’s a fantastic penalty killer.

“He’s been a great addition for the team both in the locker room and on the ice.”

The Falcons dominated the opening 20 minutes jumping out to a 5-1 lead. Shots were 11-9 for in favour of St. Catharines as the Falcons capitalized on several odd-man rushes against a helpless Anthony Tremonte.

St. Catharines built their lead to 7-1 in the second before a pair of late goals by Thorold narrowed the gap to four goals after 40 minutes.

Overall, it was a sloppy effort by both clubs.

“I wasn’t happy with our second period. I thought we got away from it and got sloppy and that can happen,” Fitzgerald said. “These games, we need to be dialed in.”

Down the hall, Thorold coach Scott Barnes stated the obvious after such a lopsided loss.

“I think we’re going to really go over this one,” he said. “We’re going to go over some things and get back to basics.

“We had a pretty good start and we can skate with these guys but once they got a goal, it kind of deflated us and the next thing you know it’s 4-1. We learned that if we make those mistakes against a good team, they’re going to bury it.”

Hawk talk: Kyle Martin, Jacob Mastrangelo and Trent Sheldon did not dress for the Hawks . . . Dante Copps and Nathan Smilsky were scratched for the Falcons  . . . Falcons captain Michael Davies was given a 10-minute misconduct late in the second . . . St. Catharines forward Carson Eden was given a game misconduct for a head check in the middle period . . . Officials for some reason were not giving the official scorer second and third assists on most goals. The stats were corrected following the game after consultation with the teams.

Up next: The Falcons host Fort Erie Friday at 7 p.m. The Blackhawks travel to Buffalo Sunday for a 7 p.m. start. 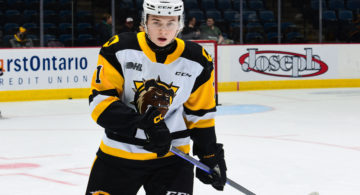 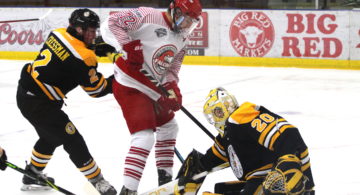 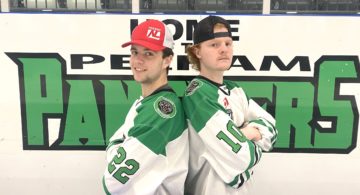