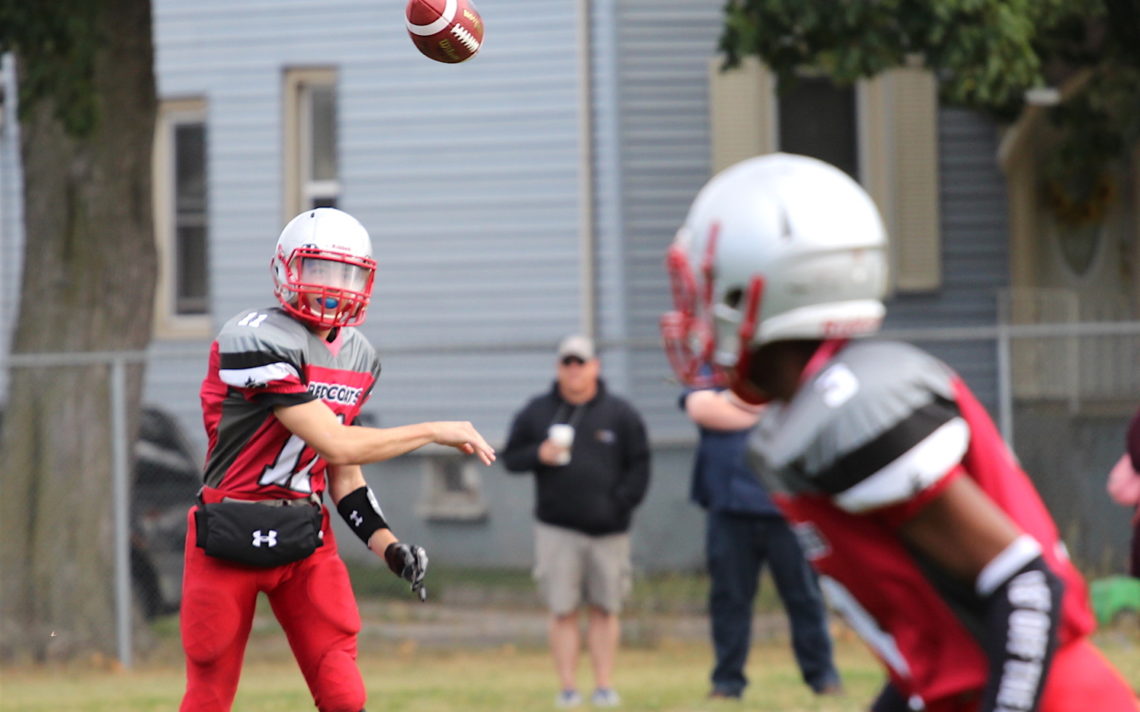 Redcoats rebound with win over Saints

What a difference a week made for the Governor Simcoe Redcoats senior football team.

One week after a sluggish and penalty-filled loss to Eden in their opener, the visiting Redcoats rebounded with an impressive 34-12 triumph over the St. Catharines Collegiate Saints.

“The kids executed a lot better and having that extra week helps,” Simcoe head coach Jamie Brophy said. “We got a lot of the kinks out and we had a couple of players who had a lot more focus today.

“Joe Fusek was phenomenal and Andrew Scott was good,” Brophy said. “A lot of our influential players are in Grades 9, 10 and 11 which bodes well for the future. but they just need the experience.”

And maybe some repetition.

“We worked hard this week in practice and it paid off,” Brophy said.

Fusek, a linebacker with the Niagara Spears junior varsity team, was effective on both sides of the ball, He had a strong game on defence and rushed for more than 100 yards, including a 67-yard TD run.

“As a Grade 10 kid, he plays both sides of the ball and he never comes off the field,” Brophy said, “Not only that, he practises super hard and that sends a message to the other players on the team and they want to emulate what he is doing.”

Fusek plays defensive halfback for the Redcoats and on offence he plays everywhere from the backfield to tight end.

“We move him around a lot but when you have a player like that, you can do that,” Brophy said.

The 15-year-old Fusek isn’t fussy where he lines up.

Fusek is enjoying high school football and a chance to play for a championship. Last year, the Redcoats took part in an exhibition schedule.

“It’s great to get that chance,” he said. “Football is teamwork and it’s so rewarding as a team to win a championship.”

He agreed the biggest difference this week was focus in practice and in Thursday’s game.

“We all worked as a team,” he said. “We weren’t overconfident coming into the game either which helped.”

For Collegiate, things started promising when quarterback Jon Emmorey connected on a 68-yard scoring strike with Josh Dionne to give the Saints an early 6-0 lead. Unfortunately, things went downhill when the QB left with an apparent ankle injury.

“There were a few other injuries to key starters early in the game,” Collegiate head coach Nathan Greene said. “You could see on the first possession we moved the ball really well and once the starters went down, we didn’t have an answer for them.”

High school football is a war of attrition but Greene is confident his team can rebound.

“We are working on our depth and I am really comfortable with the kids who will be stepping into those roles,” he said. “We will be OK.”

BPSN Star of the Game: Governor Simcoe’s Joe Fusek with 106 yards rushing, including a 67-yard TD run, and a 29-yard pass reception.

BPSN Second Star of the Game: The French fries from the Collegiate food truck with an assist from Steve Abfal (sideline delivery).