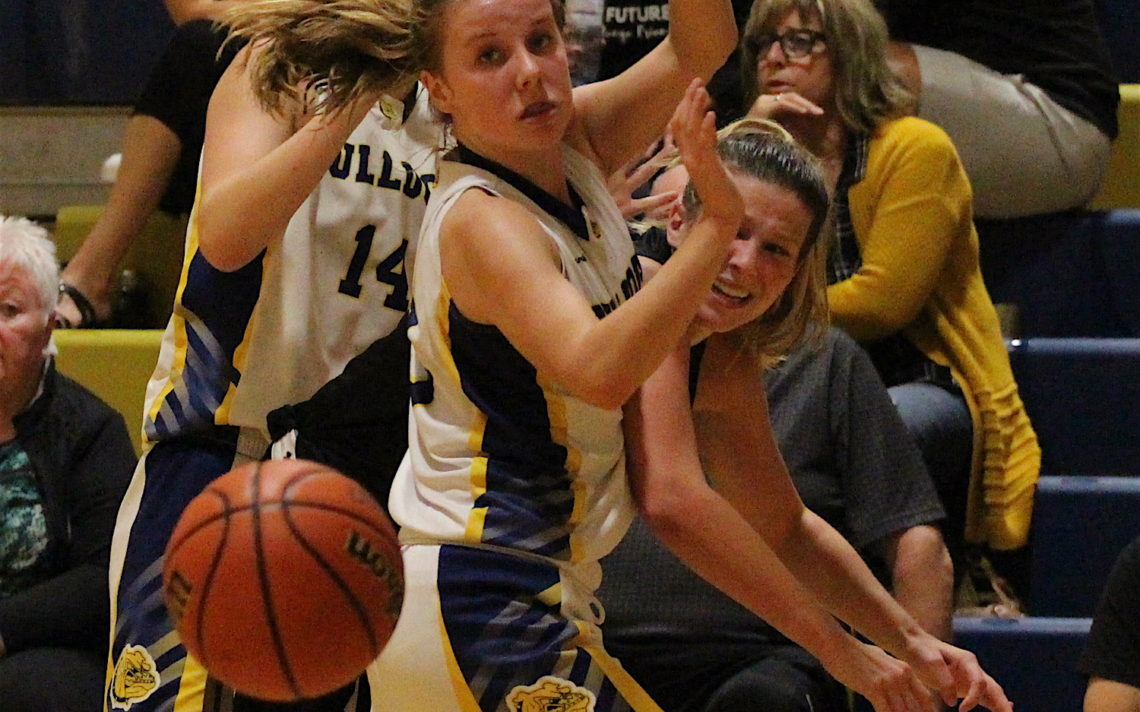 The Sir Winston Churchill Bulldogs advanced to the championship semifinals of the Standard Girls Basketball Tournament with a 52-35 triumph over the St. Francis Phoenix. Photo by BERNIE PUCHALSKI

The theme of this year’s Standard Girls Basketball Tournament and indeed high school girls basketball across Niagara is the influx of talented Grade 9 and 10s making their marks on senior and varsity rosters.

The Sir Winston Churchill Bulldogs are poster children for this impressive youth movement and their talents were on full display Wednesday night in a 52-35 victory over the St. Francis Phoenix in the semifinals of the Standard tournament.

Grade 9 forward Janee Harrison poured in a game-high 21 points, Grade 10 guard Kaley DeMont chipped in with 17 points, Grade 9 guard Ally Sentence scored three points and was a nasty menace on the defensive side of the ball while Grade 10 starting guard Olivia Krieger didn’t score but played a solid all-around game.

“I start two Grade 9s, two Grade 10s and a Grade 12 and I bring in lots of Grade 9s, 10s and 11s,” Churchill coach Frank Keltos said. “We are going to make mistakes and lots of them, but I keep telling the girls they are freakishly athletic.

“We are trying to keep it as a family and grow together.”

Harrison has grown lots already and Keltos loves what she brings to the court.

“She’s freakishly athletic and she’s long. I don’t know if you noticed how long her arms are. She needs to work on her maturity and when to shoot,” Keltos said. “When it goes in I don’t complain but sometimes there’s only five seconds gone on the (shot) clock and the ball is going up.”

The 14-year-old has made a smooth transition to senior basketball.

“It’s really good,” the 5-foot-10 forward said. “There’s a lot more competition. I have to make sure I stay low on defence and work together as a team.”

The Welland Warriors travel player has high hopes for her basketball career.

“I’m hoping to play in college and maybe play in the WNBA some day,” she said, adding she has lots to work on.

“Boxing out is really important and I have to make sure I am not selfish.”

Harrison and the other young stars are expected to be the centrepieces of a strong Bulldog squad for the foreseeable future.

“I got three years left of solid play and next year we will be more mature and the following year even more mature plus whatever comes in after that.” Keltos said.

In falling to the Bulldogs, the Phoenix didn’t shoot the ball well and turned it over too many times. St. Francis could survive the former but not the latter.

“Missed shots are going to happen and we have a couple of really good rebounders so we’re OK with the missed shots,” Phoenix coach Jon Marcheterre said. “Losing our point guard last night meant that some inexperienced ball handlers had to carry the load for us.”

With point guard Sophie Al-Kayed out, she sprained her ankle in a game Tuesday, St. Francis hung with Churchill for a long time before the Bulldogs pulled away.

“We were very effective with our press but for us it was a little bit of a lack of depth and a little bit of inexperience at guard kind of wore on us as the game went on,” Marcheterre said.

St. Francis came into the tournament with a 1-1 record in league play, defeating Saint Paul and losing Monday night to Saint Michael.

Erin Giroux had an excellent game for the Phoenix pulling down tins of rebounds and scoring a team-high 14 points. Ava Lannan added nine and Viktoria Cubelic hooped seven for St. Francis.