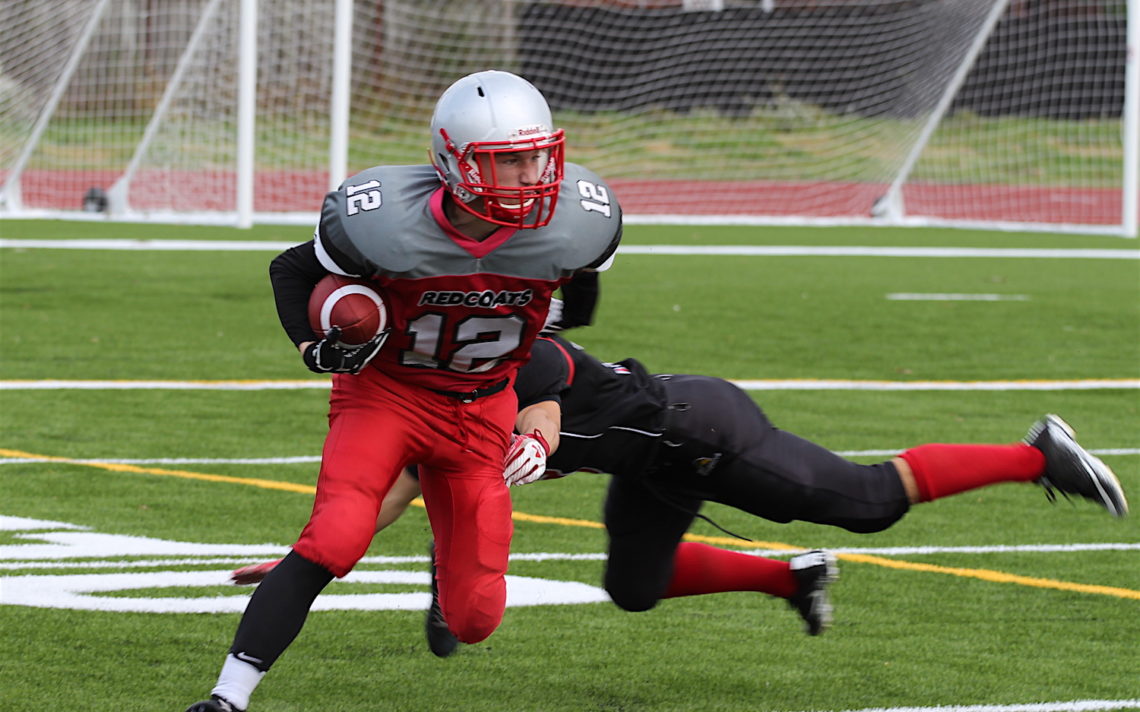 Governor Simcoe’s Remy Gavanac runs through a tackle in Wednesday’s 27-19 victory over the visiting Grimsby Eagles. Photo by BERNIE PUCHALSKI

He couldn’t wait for the season to begin but ended up missing the first two games after he was bit in the face by a dog and needed 13 stitches to close the wound.

“I was playing with it and I kind of agitated it and it jumped at me,” the 16-year-old said Wednesday, after scoring a major to help the Redcoats defeat the visiting Grimsby Eagles 27-19 in Niagara Region High School Athletic Association Tier 2 play.

He ended up having the stitches in for a week and then took off another week as a precaution. Gavanac played high school football two years ago but took last year off to focus on track and field.

“I like it and I decided to play again because it’s fun,” he said.

Governor Simcoe head coach Jamie Brophy is happy to have him back.

“For him to rebound so well in his first game of the season was fantastic,” Brophy said. “One of the other running backs went down and he stepped right in. It’s great to have that depth.”

Gavanac also ended up subbing in as a defensive corner.

“He went in and played well there too,” Brophy said.

With the victory, coupled with Eden’s win over Collegiate, it means Governor Simcoe is now tied for first at 2-1 with Eden and Grimsby. “It’s a great win for us playing on the (artificial) turf for the first time,” Brophy said. “It’s great for the school and it’s a change as we try to develop our program.”

After losing in Week 1 to Eden, the Redcoats have gotten better each week.

“The kids are practising really hard and we are seeing a lot of different things from different players,” Brophy said. “Having a varsity program, it’s tough to see the Grade 9 kids playing right away but we have Grade 9s contributing right away.”

One of those Grade 9s, Danny Lewis, had two nice pass receptions, scored on a 22-yard run and made the game-ending tackle as time expired.”

“I’m so happy. I can’t believe it, Grade 9,” Lewis said on the sidelines, after his touchdown.

Grimsby was expecting the worst Wednesday but almost managed to pull out the win.

“We didn’t have a good feeling going into this one,” Grimsby coach Zack Silverthorne said. “Attendance has been poor at practice because we have a lot of people sick. We were missing 15 at practice Monday and had another 10 missing last night.” “We missed a couple of extra points, we had a couple of bad penalties and lots of injuries,” he said. “We have five days off and I would rather lose Week 3 than Week 7 or 8.”

Grimsby’s Justin Defaria continued his torrid TD streak scoring two in Wednesday’s game to give him nine on the season.

“He’s hard to tackle, he’s strong, he’s smart and he catches and he runs,” Silverthorne said. “We kept giving it to the horse but they are a good, tough team, aggressive and fast.”

The Eden Flyers improved to 2-1 in NRHSAA Tier 2 play Wednesday with a 22-0 shutout victory over the St. Catharines Collegiate Saints.

Blake Maude threw TD passes to James DeBoer and Evan Langendoen and Cole Parkin added a rushing major for the Flyers. DeBoer added a single point on a punt through the end zone.

“It was a competitive game and was only 7-0 for us at the half,” Eden head coach Jordan Smith said. “Our defence played tough and we started to put things together the way we wanted on offence.”

Smith felt the score didn’t reflect how close the game was. The game ended up being called off early in the fourth quarter after a second delay due to lightning.

The Thorold Golden Eagles fell to 1-2 in NRHSAA Tier 1 play Wednesday following a 33-0 loss to the Greater Fort Erie Gryphons.

“It’s back to the drawing board. Our execution and effort was lacking,” Thorold head coach Duane Kemp said. “We didn’t execute and GFESS did. That’s the difference in Tier 1.”

BPSN Star of the Game: Grimsby’s Justin Defaria with 83- and 69-yard TD receptions from Nathan Joyner.