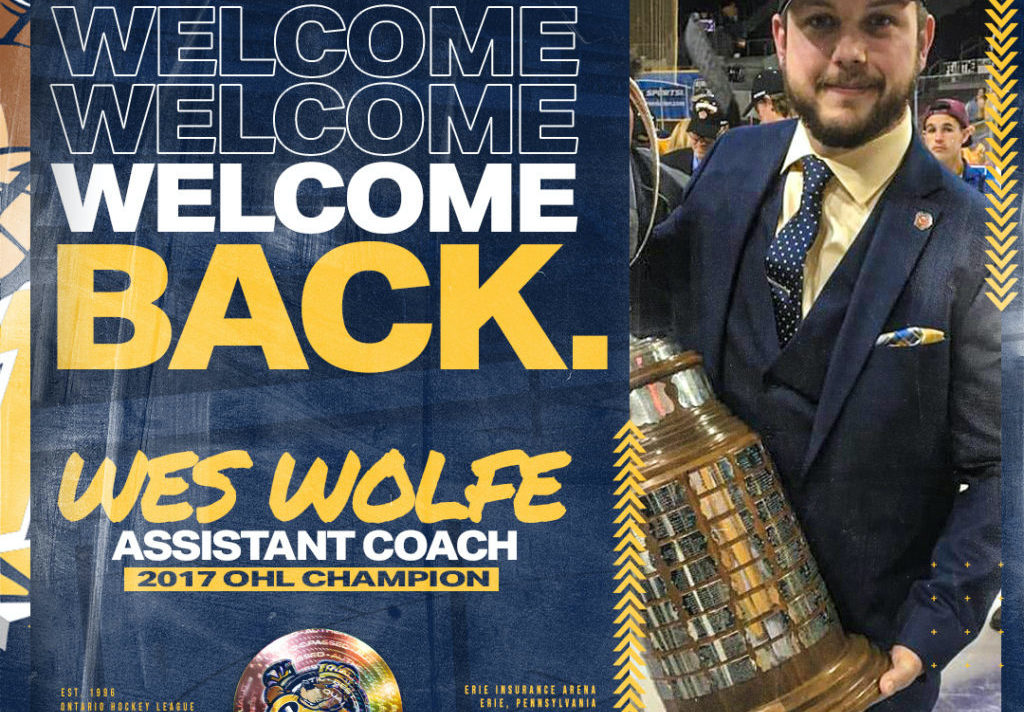 Everything old is new again for Wes Wolfe.

Wolfe had talks with Erie general manager Dave Brown and head coach B.J. Adams after resigning in Cobourg and things came together recently.

“They did due diligence on their end speaking to other candidates as I would expect and I had some conversations with some other teams but things came together here in the last couple of weeks,” Wolfe said. “In the end, I think it was just a really good fit for both of us and I’m really excited to be heading back to Erie.”

Wolfe spent five seasons with the Otters from 2016-2021 as assistant coach where he worked alongside then-assistant Adams, including their work in the team’s run for the J. Ross Robertson Cup in 2017.

Adams, who was named the ninth head coach in team history in 2021, enters his first full-season as bench boss for the Otters.

“Wes brings an incredible work ethic, high positive-energy kind of person, really relates well with the players,” Adams said in a press release. “We’re really excited to have him joining our staff, and I think he’ll round it out well for us.

“The players should be excited too, because he’s great at developing guys.”

Wolfe mainly handled the forwards in his last stint in Erie.

“I think there are still some discussions to be had but I the expectations I believe is I will be running the defence and taking on some other responsibilities, taking an active lead in player development is something I have always built my coaching career on,” he said. “There is still lots of time before training camp to get everything settled but it will be a new challenge.”

Wolfe made the move to the OJHL to get more experience as a head coach.

“Prior to joining Erie, the first time I had only been a head coach save for half a season with Frank and Rick (Girhiny) in St. Catharines (with the Falcons). I tried to apply some of those experiences being a head coach. I was able to inherit the general manager’s role in November so that was a new learning experience too,” Wolfe said.

Wolfe admitted it was different being in the driver’s seat as head coach.

“Some key takeaways were being the one to make the tough decisions and being fully responsible for everything that happens in an organization and trying to create a culture from a starting point,” he said. “That is the benefit of coming back to Erie. BJ has been there for seven years — we were together and won a championship — and Brownie has been there longer so you’re not starting fresh.

“I do think bringing a fresh perspective coming from an outside organization should only enhance what it already built and continues to evolve.”

He is proud of his work in Cobourg.

“I think I had probably anticipated staying in Cobourg a little longer as head coach but things didn’t necessarily work out for the long term,” he said. “We won the East Division championship and had 14 player commitments and that number will probably continue to rise. I was really proud of the success we had but I think something I realized during my tenure there was I really missed being part of the OHL. That’s the league I want to coach in.”

His goal is still to be a head coach in the OHL.

“I’m not looking any further than the job I have in front of me now but certainly my goal long term is to be a head coach in the OHL and continue on my pathway from there,” he said. “I would consider this step to be just another one before hopefully reaching that goal.”

Wolfe, who is on the ice twice a week running skills sessions for both junior and pro players, plans to move to Erie with his wife Ally for the start of camp.