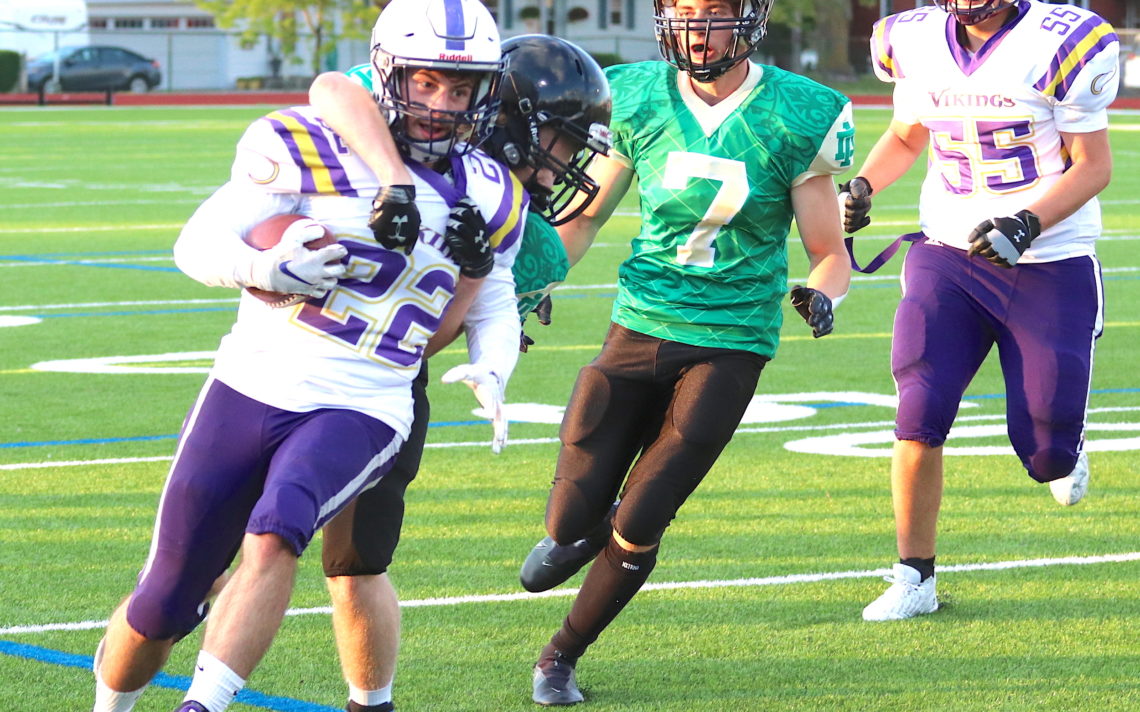 Week 4 of the Niagara Regional Minor Football Association’s new Varsity Summer League is in the books and although the St Catharines Knights have yet to score they’re improving each week.

“With having a roster size of 40 and getting them all some playing time it’s a tough battle, however they’re all having fun and improving week by week,” Knights head coach James Storin said, after his team fell 36-0 to the Niagara Falls Vikings. “Our mission this summer was to get these kids some much needed reps.”

The league has done just that for Kyle Mencfeld, a member of the MLB/RB Knights.

“Playing football with this league has taught me how to play the game but also the importance of team building and camaraderie,” said Mencfeld, who has been playing with the NRMFA since the age of eight. “I didn’t get to play for the last two years because of COVID so it has been really great that they offered a Varsity Summer League. I continue to gain more experience in order to remain competitive at the high school level.”

In other action last week, the Niagara Falls Chargers defeated the Welland Irish 40-17.

The St. Catharines Athletics junior B lacrosse team has grabbed a 2-1 lead in its best of five Ontario Lacrosse Association series against the Guelph Regals thanks to a 8-7 win Tuesday.

Guelph opened the series with a 7-6 victory before St. Catharines rebounded in Game 2 with a 9-8 win.

Mike Napoli made 44 saves to pick up the win.

Game 4 goes Saturday and if Game 5 is necessary it would be played in St. Catharines Sunday at 7 p.m.

St. Catharines coxie Laura Court guided Canada’s men’s eight to a win in the repechage and a berth in the A final at World Cup 2 in Poznan, Poland.

Unfortunately for the Canadians, the boat didn’t compete in the final because several members of the crew testing positive for COVID-19. Former Brock University rower Luke Gadsdon was a member of the eight.

St. Catharines native Morgan Rosts was a member of the women’s four that placed fourth in the B final and 10 overall.