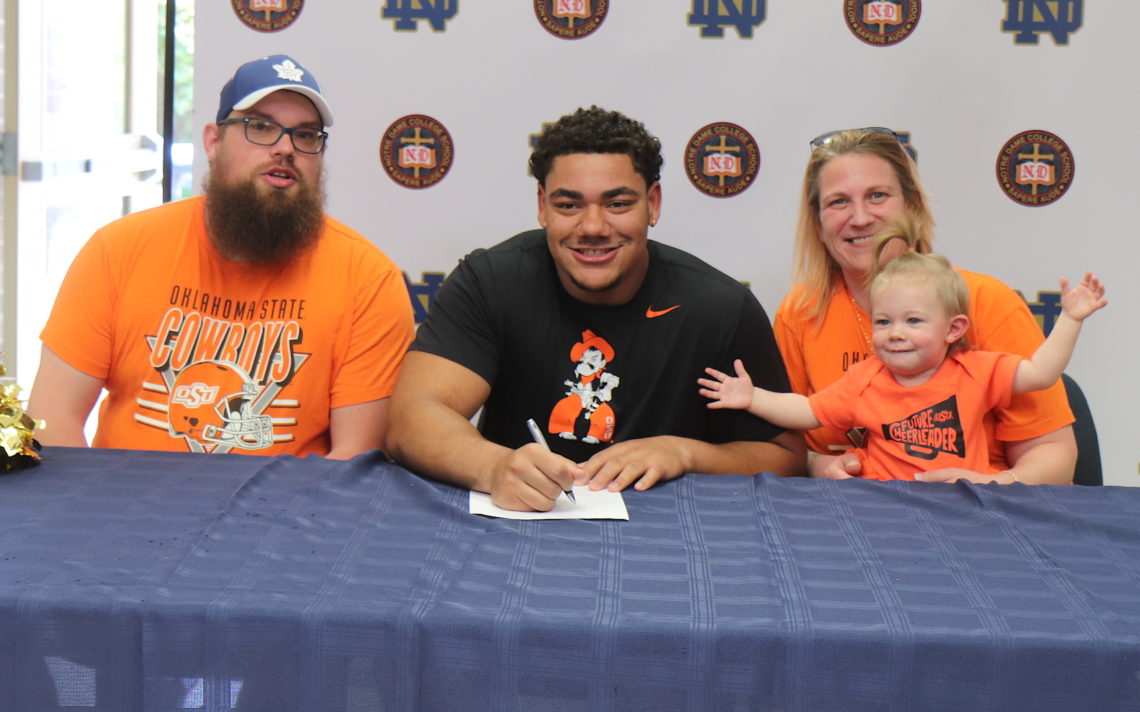 Flanked by his parents, Tanya and Josh, and his 15-month-old sister, Rebecca, Tyrone Webber returned to Notre Dame Thursday to replicate his signing of a NCAA Division 1 football scholarship with the Oklahoma State Cowboys.

The 19-year-old St. Catharines native has already been on campus in Stillwater, Okla., for a semester but it was important for him to return to Notre Dame to give credit to those that helped him along the way.

The 6-foot-3, 285-pounder started his high school football career at Denis Morris but when his family moved to Welland, he joined Notre Dame for his final season of high school ball.

“I didn’t have anywhere to go and I figured this would be the best place for me and it was so close to home too. I came to Notre Dame and we ended up going pretty far that season but we lost at OFSAA (Ontario Federation of School Athletic Associations bowl game),” the former Niagara Spear said. “After that, I got some good solid tape. My former coach at New Mexico Military took a chance on me and helped me get to the JUCO (junior college) level which ultimately helped me get to the Division 1 level.”

Notre Dame was a crucial part of that journey.

“I feel that if I had never come here for high school, I wouldn’t be where I am at now. The support from coach (Tim) Bisci and other coaches was really good and this is like home for me,” Webber said. “I feel this is what helped me develop into a really good football player and a leader, and it just made me love the game of football. I always love to come back and just see where I started from. I will never forget it.”

“When he first came to us, he was a big kid who moved extremely well but he needed a little bit of discipline and hopefully we gave him that,” he said. “He had all kinds of talent.”

Bisci agreed that a Niagara-born player signing a NCAA Division 1 football scholarship is a momentous occasion.

“We have been fortunate that we had it in the past when Mark Moroz went to Wake Forest but that was the 1999-2000 season,” he said. “It just goes to show that it doesn’t happen every day and to have a kid at this young of an age be that good says something about his talent and his work ethic.”

When his time with the Fighting Irish was over, Webber took that tireless work ethic to junior college at New Mexico Military Institute under coach Kurt Taufaasau. At NMMI, Webber was named the conference most valuable player and a first-team all-conference honouree. He was America’s top junior college offensive lineman and the No. 2 overall junior college prospect, regardless of position, according to 247Sports.He was a four-star prospect, according to both Rivals and 247Sports. He was also a First Team JUCO All-American, one of two freshmen offensive linemen to receive that honour.

His junior college experience was important.

“It was the missing link. If I didn’t go to junior college, I would have stayed home and played,” Webber said. “That wouldn’t be bad and it would be fun to stay at home but to be able to go play Division 1 football is any kid in Canada who plays football’s dream. Going JUCO was stepping in the door to see the different type of competition that I would be facing.”

It also got him used to the speed of football south of the border.

“America’s speed is a lot different compared to the speed of the game in Canada. I give much appreciation to the coaches who took a chance on me there.”

“It was a blessing. I am always humble and always grateful for the opportunities I have gotten so far but now it is time to lock in and help Oklahoma State win a national championship. That is the goal.”

Oklahoma State was an easy choice.

His visit to the school solidified his choice to attend Oklahoma State.

“They brought out the horse and I got to ride it,” Webber said, referring to Bullet, a black American quarter horse stallion rode by a Spirit Rider at Oklahoma State University football games and other special events. “I was like ‘Damn, That is love right there.’ They also showed my family a lot of love.”

Webber admitted feeling sorry for making Bullet lug his rather large frame around.

“I felt bad and that’s why we keep the ride short,” he said, with a laugh. “The ride wasn’t too long and I appreciate him for sticking through it.” 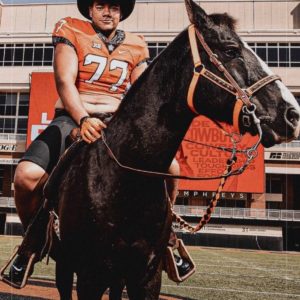 He also loved the facilities.

He has lofty ambitions at Oklahoma State but knows it might take time to achieve them.

“My goals are to start and stuff like that but my main goal is to develop into a better football player and a better man. That is the reason why I went to Oklahoma State,” he said.

“Starting isn’t really a big deal for me right now. I am trying to focus, develop and get as good as I can. With the power of God, that stuff will all come. I just have to wait my turn and keep working as hard as I can.”

His Muslim faith is extremely important to him.

“The power of Allah has really helped me throughout this semester at Oklahoma State,” he said. “It has shown me how to stay mentally tough through anything, the ups and downs and to not give up.”

At Oklahoma State, he has made a smooth transition to the life of a Division 1 athlete.

“Coming from junior college, I am used to the speed of the game. All I need to do is keep getting stronger in the weight room and have better technique.”