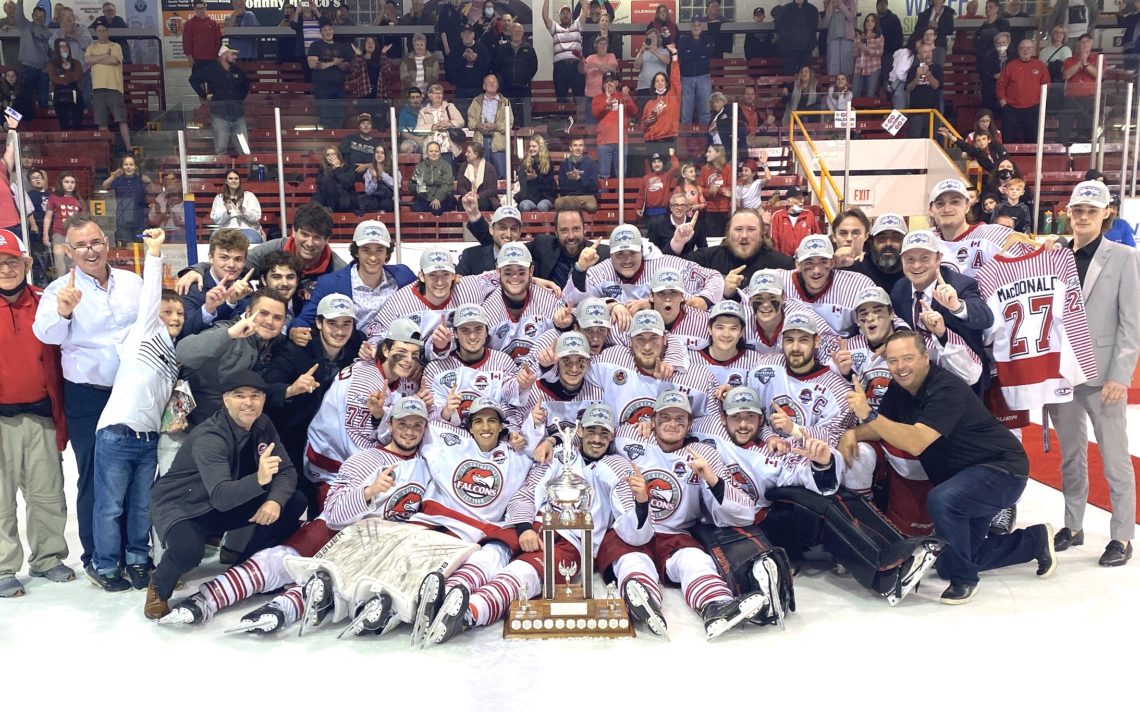 When the St. Catharines Falcons move their impressive display of championship banners from the Jack Gatecliff Arena to their new home at the Seymour-Hannah Sports Complex next season, they hope to have two more to hang in the rafters. 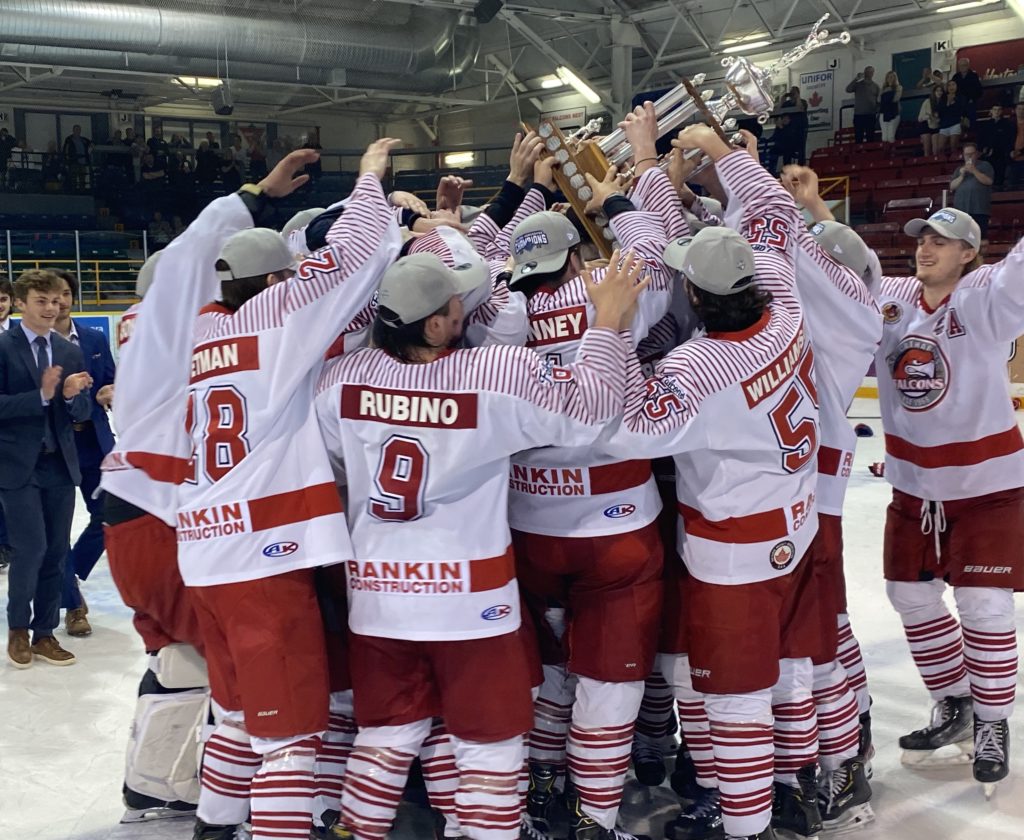 The Falcons now advance to the round-robin portion of the Sutherland Cup playoffs versus the Cambridge RedHawks and the winner of the Chatham-Leamington series. The series could start as early as Tuesday in St. Catharines although dates have yet be finalized.

As the final buzzer sounded, the players poured over the bench to swarm goaltender Andrew MacLean, who once again came up big with a 26-save performance for the shutout.

“Playing to the end, this is what we’re here for,” said MacLean, who was named playoff most valuable player. “Eight months ago, we felt it was the team that could take us all the way and we stuck with it.

“I can’t even put into words how happy we are.”

MacLean, who played last season with the Niagara IceDogs of the Ontario Hockey League, was recruited by Falcons general manager Frank Girhiny in the off-season with the pitch the Falcons had a team that could win an Ontario title.

“I mean, stopping pucks is why Frank brought me here and if I can stop them all in one game, even better,” MacLean said.

Falcons coach Tyler Bielby, who was dripping with water after being doused by the players, was thrilled for his charges.

“I’m just so excited for the young men in that room,” Bielby said. “They earned that moment tonight, no question.”

Following the presentation of the MPV trophy to MacLean, Falcons captain Joe Colasurdo stepped up to accept the Golden Horseshoe championship trophy.

“It means a ton,” Colasurdo said. “The fans were great — you see how many people were here — everybody loves this team and we love the fans and so happy we could do this together at The Jack. 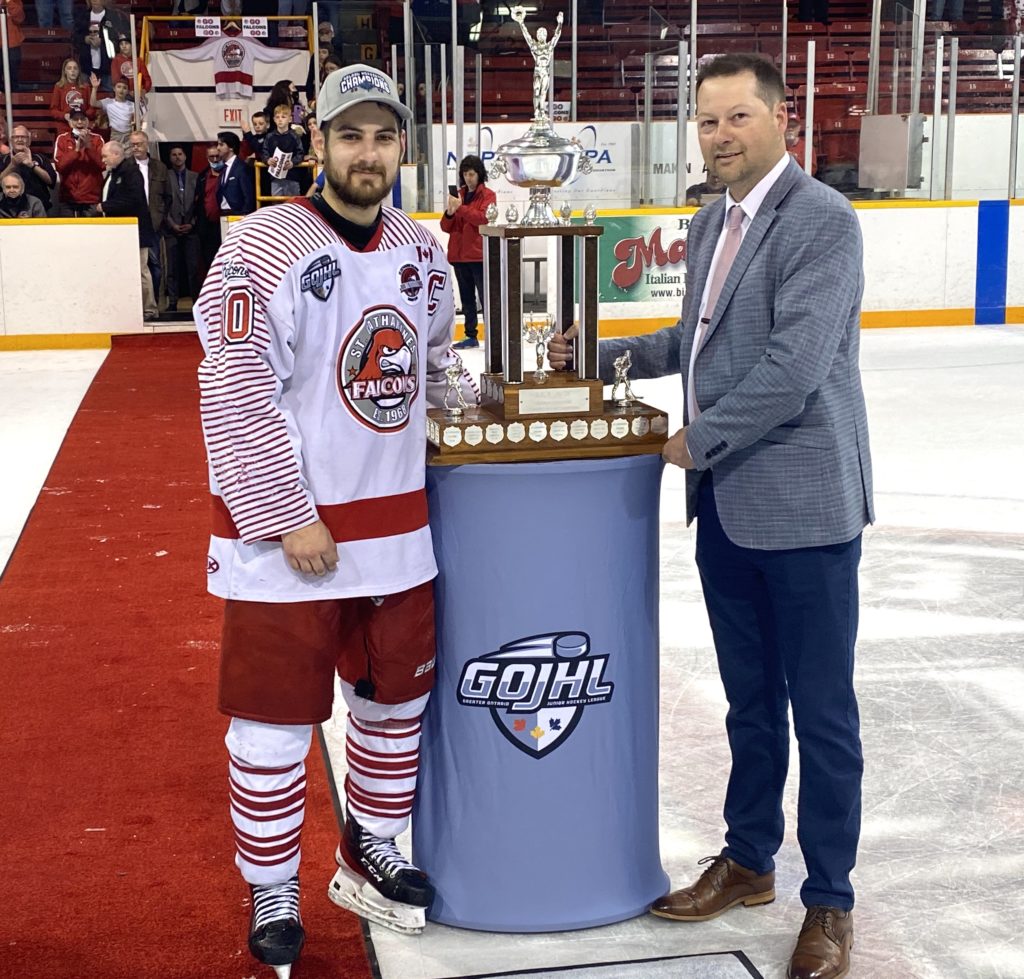 “We talked about wanting to win it on home ice for the fans and that would mean the most to us so we gave it everything we had.”

Bielby said he encouraged the players to hoist the trophy despite the fact their end goal of winning the Sutherland Cup is still to be accomplished.

“These moments come around in life very few and far between so enjoy this moment, enjoy this trophy, enjoy the night,” Bielby said. “When we wake up tomorrow morning, we’ll get re-focused.”

Girhiny said the championship was no accident.

“From where we stated to where we ended, the commitment from the players and coaching, staff, I’m so proud,” he said. “Eight years we’ve been in the finals every year and we’ve haven’t won it in a while, but to win it in this fashion, against such a good team, I’m real proud.”

“It’s a lot to take in at the moment but I’m so proud of the guys,” Boria said. “It’s not one person. It’s everyone. It’s 25 guys from the coaching staff all the way to the trainers.”

With a Golden Horseshoe title under their belts, the Falcons are far from satisfied.

“Just getting started,” Colasurdo said. “The jobs’s not done. We’re going to enjoy this moment and then get back to work.”

The Falcons got the only goal they needed when Nicholas Rubino scored less than four minutes into the first period.

Up next: The Falcons advance to the round-robin portion of the Sutherland Cup playoffs versus the Cambridge RedHawks and the winner of the Chatham-Leamington series. The series could start as early as Tuesday in St. Catharines although dates have yet be finalized.