U of T lands another BT football player

For Eddie De la Garza, it was an easy decision to choose the University of Toronto as the school to pursue his post-secondary football career.

“It was the proximity to home,” the 18-year-old Blessed Trinity linebacker said. “It’s an hour away and I can just hop on the Go Train and you are home.”

The coaching staff also played a role in his decision.

“I feel I can get the one-on-one experience and they said they are not just there to help you improve as a football player, but as a person on and off the field,” the former Niagara Spear said. “I like what they are building right now at the U of T.

“They have a new coach with coach (Greg) Marshall and it looks like the program is going in the right direction. I hope I can be a part of that and help build the program.” 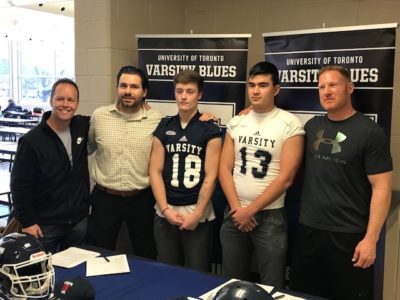 And last, but certainly not least, was the schooling the U of T could provide the Grade 12 student. He plans to study in the Rotman Commerce program.

“To play football and get to go to a highly-accredited school for business, is something special,” Thunder head coach Mark Antonelli said. “To be able to do that and hone his craft is going to make him a better individual once he graduates.”

Playing football in university is a dream come true for De la Garza.

“It was something that I always wanted to happen since Grade 8 and I knew that if I worked at it, I could make it happen,” he said. “When it really started to become a possibility was in Grade 10 and Grade 11 when I was talking to schools and they showed interest in me.”

He was part of a Blessed Trinity junior team that made the Metro Bowl semifinals in Grade 10. After suiting up with the Spears in Grades 9 and 10, he spent last summer with a Team Ontario squad that won a bronze medal in the Canada Cup in Nova Scotia.

This past fall, he was the middle linebacker/strong linebacker on a Thunder team that made it to the Niagara Catholic Athletic Association championship game versus Notre Dame.

“I like his leadership,” Antonelli said. “He brought us to the (NCAA) championship game from a defensive standpoint.” 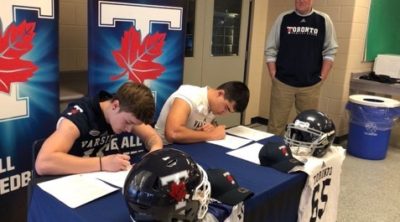 “He was fantastic,” he said. “I’ve coached him for two years and he is a great kid and student.”

The 6-foot-1, 195 pounder, who also had interest from Queen’s and Guelph, called all the plays on defence for the Thunder.

“That really helps,” De la Garza said. “When you are calling the plays, you have to know every position and what they are doing on every job. I know the defence and defensive systems pretty well and I have studied them pretty good.

“I can identify things pretty good and can make audibles when necessary.”

He is already preparing for his first season of university ball.

“As a linebacker, I want to work on my pass rush and getting into transition quicker and obviously work on my reads,” he said. “It’s being able to identify plays quicker so I can come down on the ball harder.”

He knows he will also have to get bigger, but there is a caveat to that.

“You want to get bigger, but you never want to lose speed,” he said. “I want to get as big as I can, but I know at the next level, that the big thing is always speed.

“Everyone is faster and bigger and I would like to be a little bit faster than anyone else.”

His goals for the season are to see playing time.

“I want to get on the field and contribute in any way that I can and, if that’s on special teams, then so be it,” De la Garza said. “I’m a football player and I want to be able to play wherever I can play.

“And I want to improve and help the team in any way that I can.”

Going to a team like Toronto may help him achieve his goals quicker than elsewhere.

“Any team you have to compete for your position, but with a program that is rebuilding, maybe the opportunity is a little higher.”