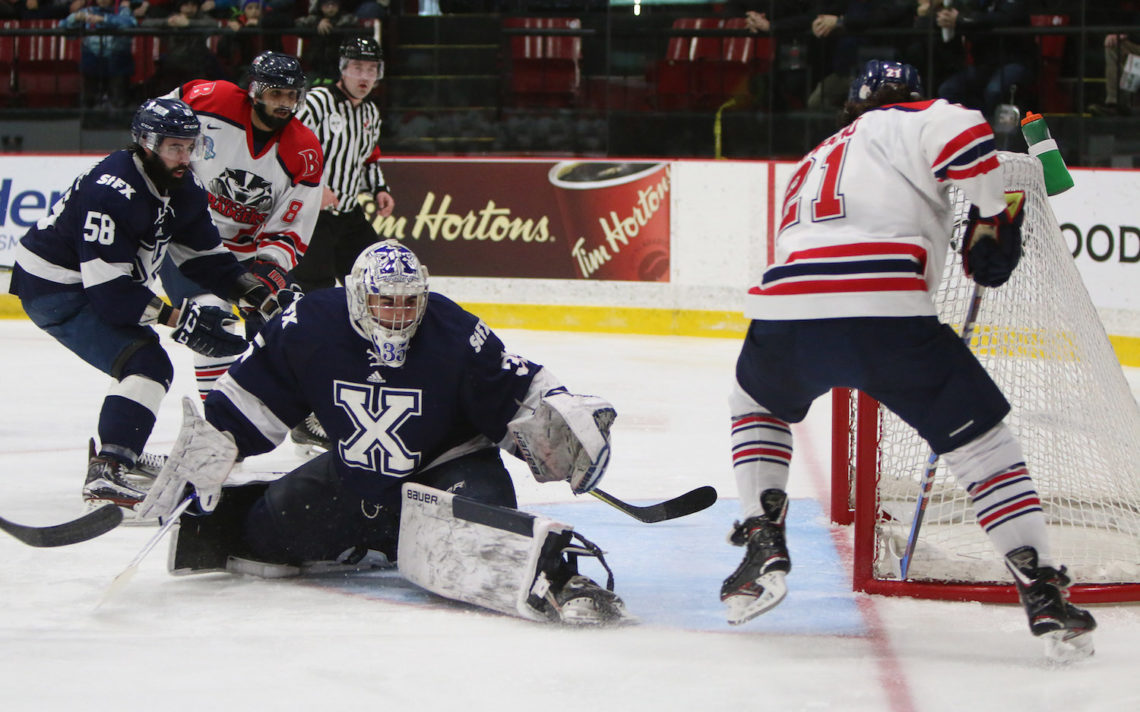 Brock can’t get W versus X-men

The Brock Badgers men’s hockey team was one and done at the USPORTS national championships in Fredericton, N.B.

In quarter-final action Thursday afternoon, the Badgers fell 6-2 to the St. Francis Xavier X-Men. The X-men grabbed a 2-0 first-period lead on goals by Holden Cook and Kristoff Kontos before Brock tied it up before the period’s end on tallies by Braden Pears and Ayden MacDonald.

The score remained tied until there was 5:01 left in the second period when St. Francis Xavier regained the lead on a goal by Michael Clarke.

Craig Dunnick scored on the power play 5:04 into the third to give the X-Men a 4-2 lead and then they put the game away with goals by Cook and Kontos, the latter coming into an empty net with 10 seconds left in the game. St. Francis Xavier outshot Brock 38-25.

“It was a pretty even game and we started out pretty good in the third and then we gave up a power-play goal,” Brock head coach Marty Williamson said. “The whole game changed after that.”

Williamson described Brock’s first berth at the nationals in a decade as a great experience.

“You get to see a lot of these teams who have been here quite a few times and it’s a great learning experience,” he said. “I will watch the rest of the tournament to keep picking up on these other teams.

“For us, these guys are setting the standard for what we want to do going forward and we want to be considered a lot like the teams that are here.”

Brock’s players were proud of their season and getting to the national championships.

“For myself and the 10 other graduating players, it was something special to be able to have the season we did,” Brock’s Matt McLeod told Brock’s Dan Dakin. “Now, there’s a higher standard for Brock hockey. That’s something to be proud of.”

Six of the eight teams competing at the nationals this week were also at the tournament last season and five of the teams were making their third straight appearance.

“You can see the consistency in their programs and that’s what we want to have with our program,” Williamson said. “We want to keep giving ourselves a chance to win a national title.”

“It’s a deep tournament and it’s a very difficult championship to win,” he said. “You have to have all your bases covered. We had a very strong team but we can build it even better.”

At the nationals, Williamson got a chance to renew acquaintances with Thorold native Anthony DiFruscia, who he coached with the Niagara IceDogs of the Ontario Hockey League. DiFruscia plays with the X-Men.

“We are staying at the same hotel and I had a real good visit with him and he gave me a big hug at the end of the game and congratulated us on a great season,” Williamson said.

The Badgers will lose 10 players to graduation and Williamson will be working hard to add to and enhance his roster. Brock bought 25 players to the national championships.

“We have some pieces to fill, but we have some good guys coming in and I am excited about next year’s team,” he said. “This has helped an awful lot, this run, with recruiting and trying to get the Johnny Corneils or whoever from the overage players.

“When you start having a winning-type thing, that goes a long way to having players wanting to come here.”

Williamson’s extensive experience as an OHL head coach and general manager is also a boost to the cause.

“It helps,” he said. “The guys I am trying to recruit are from the OHL and I’ve coached against them and they know me.”

Williamson will take a few days off after the nationals and then continue on with the recruiting process.

“We have already talked to a lot of the players but everyone knows our season finishes in mid-March,” he said. “March and April is a pretty busy recruiting time.”

For next season, Williamson will be able to apply the lessons he learned in his inaugural season.

He was dealing with a lot more mature players — players ages 20-24 compared to 16-20 — and a much shorter university season compared to major junior.

“You only play 28 games compared to a 68-game schedule so every game has a little added importance to it and playoffs are two out of three.

“You need to understand the importance of each game.”

In the OHL, teams would play three games in a weekend and would be happy to take two of them. That’s not the case in university hockey.

“You need to win the weekend and win both games,” Williamson said.

Also on Williamson’s schedule is a stint as a colour commentator for TSN’s broadcast of the Memorial Cup in May.

“I’ve done it one other time and I am looking forward to doing it again.”

He can say the same now about the USPORTS championships.