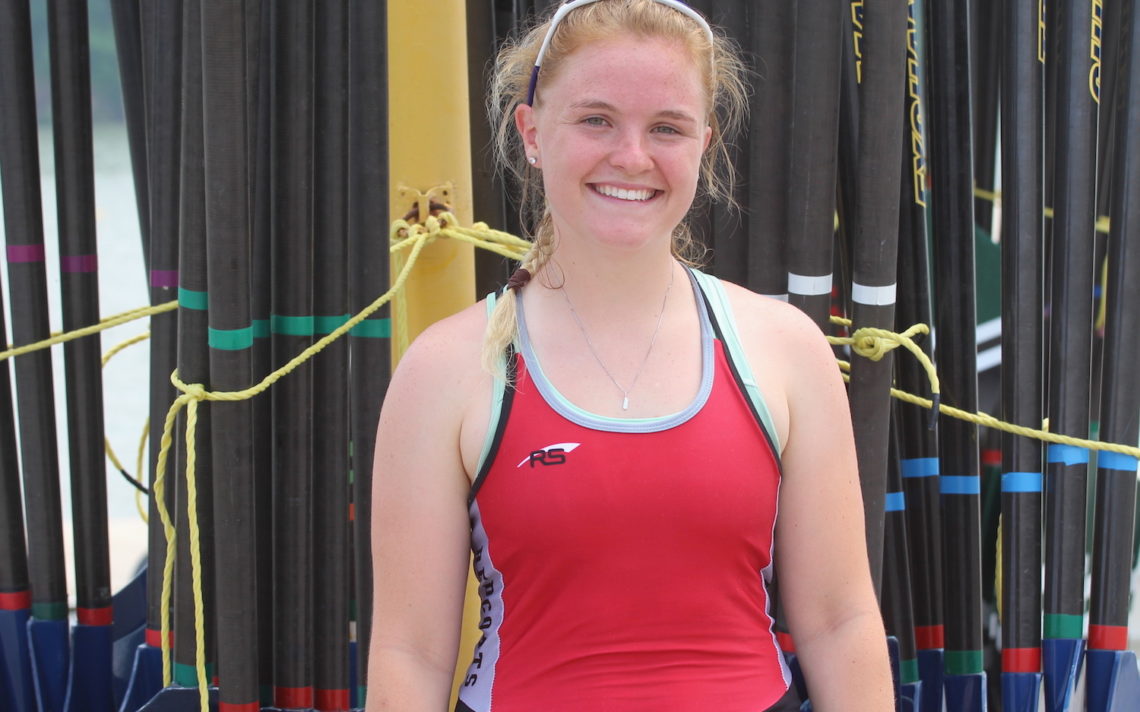 “For the past four years, people have asked me that question and I can say now that’s it’s rowing,” the 17-year-old St. Catharines resident said. “There is something about rowing that you can’t get anywhere else.”

It took an injury to discover rowing was her first love. The Grade 12 student was scrimmaging last summer with other hopefuls for the Niagara JUEL and Niagara JUEL Prep basketball teams when she broke her foot two weeks before the Royal Canadian Henley Regatta.

“I remember watching and knowing that I couldn’t row,” she said. “At that moment, I knew it was rowing. I missed it a lot more because it’s different. What you go through in two kilometres is really unexplainable.”

Last year was her first year of summer rowing with the St. Catharines Rowing Club and it was a great experience despite the injury.

“It was really bad timing, but I became a much better rower in the summer,” she said. “I learned about who I was and was also open to different coaches. It definitely sucked not being able to finish the summer season, but I am back.”

Parkin was a busy girl this winter and spring, managing to train with the Simcoe rowing program and play with the Niagara JUEL team.

“From rowing, you learn how to time manage and you make time for what you love,” she said. “I knew basketball and rowing are two things I have a strong passion for and I figured out a way to make it work. And I had good coaches for both teams.”

This week, Parkin is competing in the open coxed four and open double at the Canadian Secondary Schools Rowing Association championships in St. Catharines. She has made it to one final in her high school career and would love to finish with a Schoolboy medal.

“Every stroke that I am pulling, I am thinking that this could be the last race. It’s adding a little bit more in trying to get to the last day (finals),” she said.  “It was emotional coming into it thinking this was my last Schoolboy, but there’s that excitement for the next step next year.”

That step is becoming a member of the Brock University women’s lightweight program.

“It felt like home,” she said, of her choice of Brock. “I was a little bit undecided with regards to my program, but once I talked to (coaches) Swede (Burak) and Peter (Somerwil), it immediately felt like home and they wanted me.

“They were telling me what I can add and it’s something I’ve working towards for four years. To see that they already see that in me is a really big accomplishment.”

“It’s learning more about myself as an athlete, meeting new people and pushing myself beyond the limits I think I can go already,” she said.

At a mere 5-foot-2 in height, Parkin has spent her athletic career pushing herself beyond the limits of her physical dimensions.

“It’s motivation,” she said. “I had a coach last year who said I had a big heart and that size doesn’t matter. I took that to heart and used it.”

Head coach Somerwil is glad to have her on Brock’s team.

“It looks like she is tough and she has that grit to her,” he said. “Now it is going to be up to us to start working on the technical aspects and giving her all the advantages of our training centre at Brock.

“We look forward to developing her further.”

She is part of a bright future at Brock.

Parkin has loved her four years at Governor Simcoe.

“I have met some really great people and some great coaches who have boosted my confidence which I lacked in Grade 9.”

Rowing has been a happy place for her.

“Knowing I can come to a place I love and am comfortable at is really good,” she said.