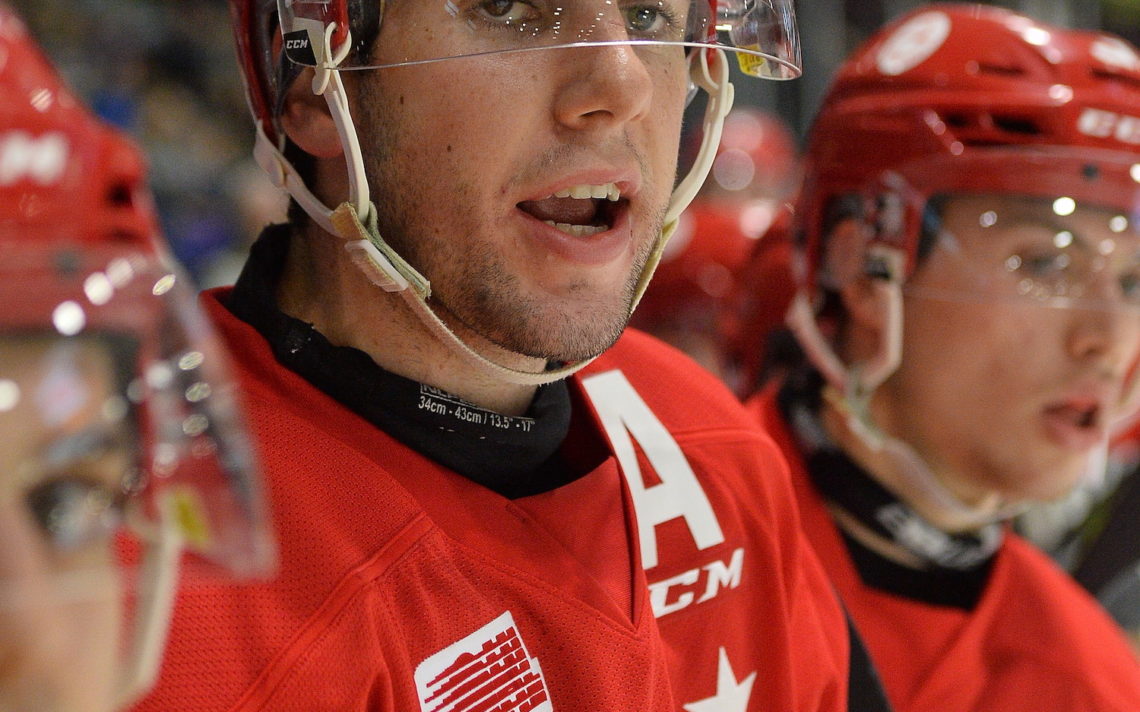 Timmins hoping to make the grade

It has been a whirlwind 2017 for Conor Timmins.

Not only did the 19-year-old Thorold native fulfill a dream when he was selected in the second round of the National Hockey League draft by the Colorado Avalanche in July and then attend his first NHL training camp a couple of months later, but the big defenceman is now in contention for a spot on Canada’s National Junior Team.

Timmins was one of 33 of the country’s top young junior players skating Tuesday at Team Canada camp at the Meridian Centre.

“It’s awesome,” Timmins said, before heading off for a random drug test. “I grew up kind of in this area. This rink feels like a home rink to me and to be able to compete for a spot here is pretty special.”

Timmins, who played a season of junior B split between the Thorold Blackhawks and St. Catharines Falcons before going the Ontario Hockey League, was in the midst of another strong season with the Sault Ste. Marie Greyhounds with six goals and 34 points in 28 games when he learned of the invite.

“I was just really exited about the opportunity,” he said. “Not a lot of people get to go through something like this so for me to have this opportunity is great and I want to take advantage of it.

“It’s a pretty special feeling, to be honest. They really treat us well here. It’s a really well-run program and I’m excited to be here.”

Timmins is one of 11 defencemen competing for perhaps eight spots. His competition grew a littler tougher this week when the Montreal Canadiens made Victor Mete available for the tournament.

Timmins was impressed with what he saw on the ice.

“It was very competitive, very fast-paced. Everyone is pushing for a spot so it’s definitely a high-paced practice.”

At 6-foot-1 and 185 pounds, Timmins is big enough to play a physical style, but is also moves the puck well and chips in more than his share on offence.

“I just have to play my game. Everyone is here for a reason and you put have to so the best side of yourself and try not to be someone else,” he said.

Timmins tipped his cap to the Greyhounds for helping him get to this point.

“It starts with our team. We have an incredible team and I was just feeding off my teammates,” he said. “I really owe it to that program that I’m here. I think they have done a great job developing me so I can’t thank the Soo enough.

“I have to credit the Greyhound coaches getting me ready for this.”

Team Canada will play a pair of exhibition games versus an all-star team of university players Wednesday at 7 p.m. and Thursday at 4 p.m. The U Sports All-Star team features former Niagara IceDogs centre Stephen Harper as well as local products Randy Gazzola of the University of New Brunswick and Hunter Garlent of Saint Mary’s University in Halifax.

Timmins knows Gazzola well. They have skated together in the summer on numerous occasion and Gazzola formerly worked for Timmins’ father, Dan Timmins, at Big Red Meat Market in Thorold.

“It’s pretty cool to have three Thorold guys playing where we’re this close to home. I think it’s going to be pretty special,” Conor Timmins said.

Gazzola isn’t the least bit surprised at Timmins’ success after seeing him progress in the summer.

“He came back after his first year in the O and was kind of tentative and he saw us (older players) trying plays and you could see him getting better over the summer and knew he was going to have a good year and go somewhere,” Gazzola said.

Team Canada will also play an exhibition game Friday afternoon at 2 p.m. versus Denmark. Final cuts are then expected to be made.

This year’s championships will be held in Buffalo, Dec. 26 to Jan. 5 in Buffalo.

“I look in the mirror every once in a while and I’m pretty happy. Obviously, it’s a great feeling to see how far I have come but there is still a lot of work ahead.”