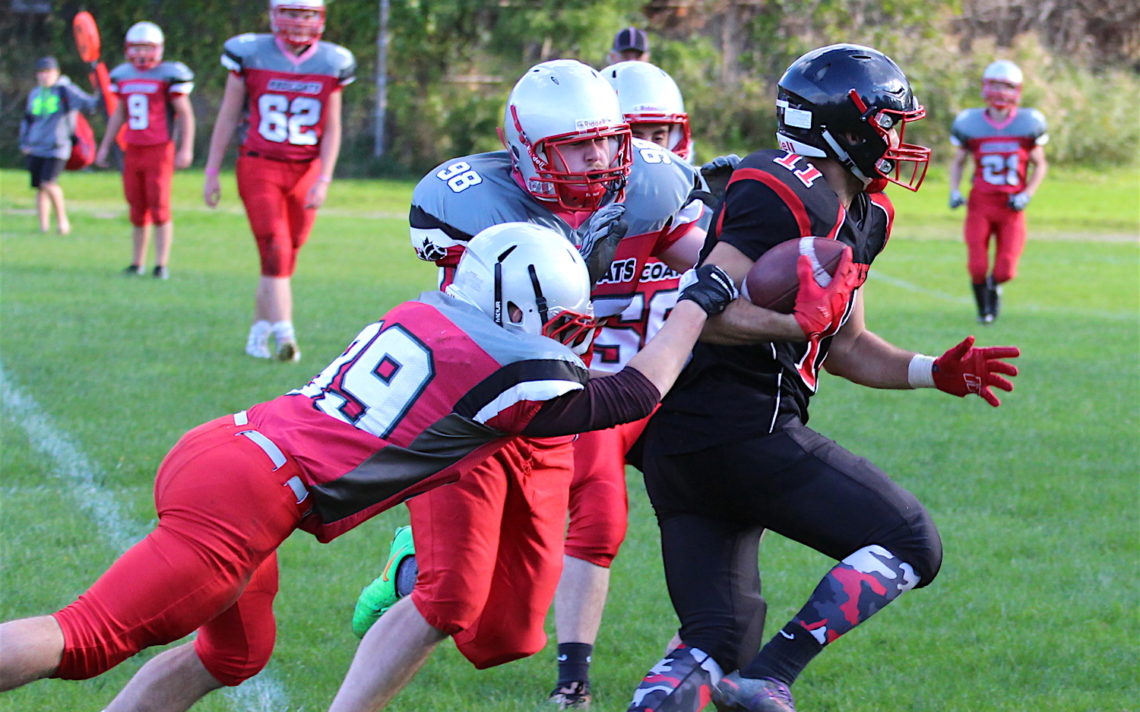 Tier 2 teams focus on Grimsby back

Football teams in Tier 2 of the Niagara Region High School Athletic Association consider it a triumph when they hold Grimsby running back Justin DeFaria to a single touchdown.

“Number 11 (DeFaria) for them is a really good football player and he made some really big plays, but we did a pretty good job of controlling him,” Simcoe head coach Jamie Brophy said.

DeFaria still managed to catch a 17-yard TD pass from Nate Joyner to help the first-place Eagles (5-1) record a 22-8 victory over the visiting Governor Simcoe Redcoats. It was DeFaria’s 12th touchdown of the season, more than doubling his total from last season. 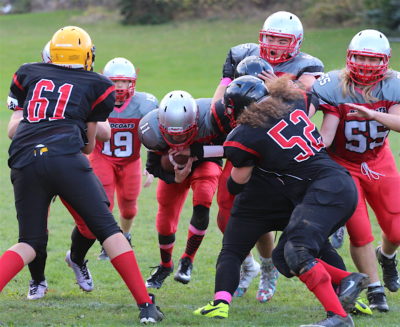 The six-foot 192-pound running back credits his improved production to a summer playing wide receiver with the Hamilton Ironmen in the Ontario Varsity Football League.

“It helped me a lot in my development as a football player,” the 17-year-old said.

The Grade 12 student has already received interest from Guelph, McMaster and York and is hoping to pursue a post-secondary career in football after doing an extra year of Grade 12 in 2018-19.

“I just love playing football and if I can play it at university, that would be awesome,” he said.

DeFaria has made a smooth transition to Grimsby after the closure of South Lincoln this past spring.

“I’ve fit in quite well and I like change but I miss South Lincoln,” he said.

Grimsby had coach Zack Silverthorne, another South Lincoln expatriate, has seen many teams key on DeFaria this season and Simcoe was no different.

“They were really trying to take away Justin at the start of the game and we had to adjust,” he said. “That’s one of our goals because everyone knows about Justin. Other players have to step up.

“They are going to try and take away Justin and I would too.” 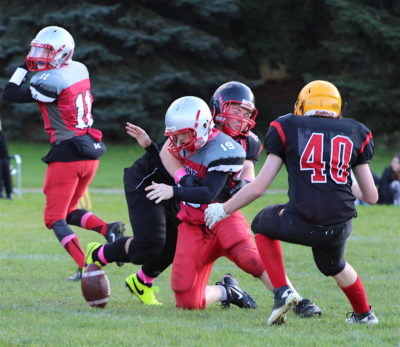 Grimsby’s players did just that. Mike Killins caught a 24-yard TD pass from Nate Joyner, Ryan Neudorf rushed for more than 100 yards and scored on a six-yard run, and Wyatt Cherberinoff had a fourth-quarter fumble recovery to preserve the victory.

Grimsby had already clinched first but didn’t want to lose going into the playoffs.

“Our goal was to win a game,” Silverthorne said. “We were brand new and we didn’t even have shirts and now we’re 5-1.”

DeFaria described his team’s record as a big accomplishment.

“We practice hard every day and one our our old coaches from South Lincoln calls it PHD; pride, hard and determination,” he said.

Scoring the lone major for Governor Simcoe (2-4) was Andrew Scott on a one-yard QB keeper. Scott also ran for a two-point convert.

“The kids played really well,” Brophy said. “Going into the half, we had a first and goal on the last play and we just didn’t punch it in.

“It was really close at that point and in the second half we had a couple of kids injured.”

With the playoff positions already determined, the game meant nothing to either squad.

“We wanted to get everybody in the game and keep everybody healthy for the playoffs,” Brophy said.

The Eden Flyers (4-2) clinched second place in the NRHSAA Tier 2 league and a home playoff date with a 30-12 victory over the St. Catharines Collegiate Saints (1-5) Thursday.

“We played our most complete game of the season,” Eden head coach Jordan Smith said. “We wanted to come out and set the tone early and we did just that.”

“We are excited to host our first playoff game at Eden in about five years,” Smith said.

For the Saints, Josh Dionne connected for a major with quarterback John Emmorey on a 70-yard pass and run play and Emmorey also scored on a one-yard run. Chris Ciede had eight carries for 58 yards for the Saints.

“We need to do a better job controlling the line of scrimmage,” Collegiate head coach Nathan Greene said. “We expect a few players to return for the semifinal game next week and no doubt they will help improve that aspect of the game.”

Greene has seen his defence step up the past couple of weeks.

“Ultimately our offence must execute as well,” he said. “If we put the reps in at practice and play the way we are capable of, the outcome in the semifinal will be positive.” 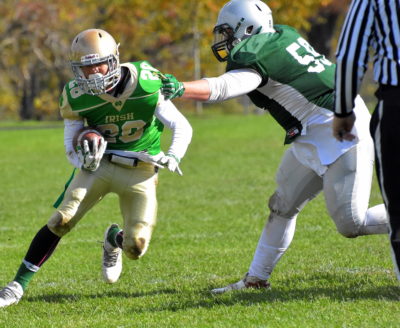 The Saint Paul Patriots advanced to the NCAA semifinals Thursday with a 35-0 victory over the Saint Michael Mustangs.

“Saint Mike’s gave us a game. The first half was close.” Saint Paul head coach Rick Oreskovich said. “Our defence dominated but our offence struggled. We didn’t get any rhythm whatsoever until the second half.”

The win was Saint Paul’s fifth straight since a season-opening loss to Notre Dame.

“Heading into the playoffs, you want to have a winning attitude and the only way to do that is by winning games and making a statement when you win,” Oreskovich said. “We have a veteran team and expect our kids to step up and play like veterans and experienced players.”

“We started the game strong, but experienced Saint Paul players made it difficult to prevent their big plays,” Saint Michael head coach Loris Lucchetta said. “Our players had lots of fun this season and they worked hard to get better every week.”