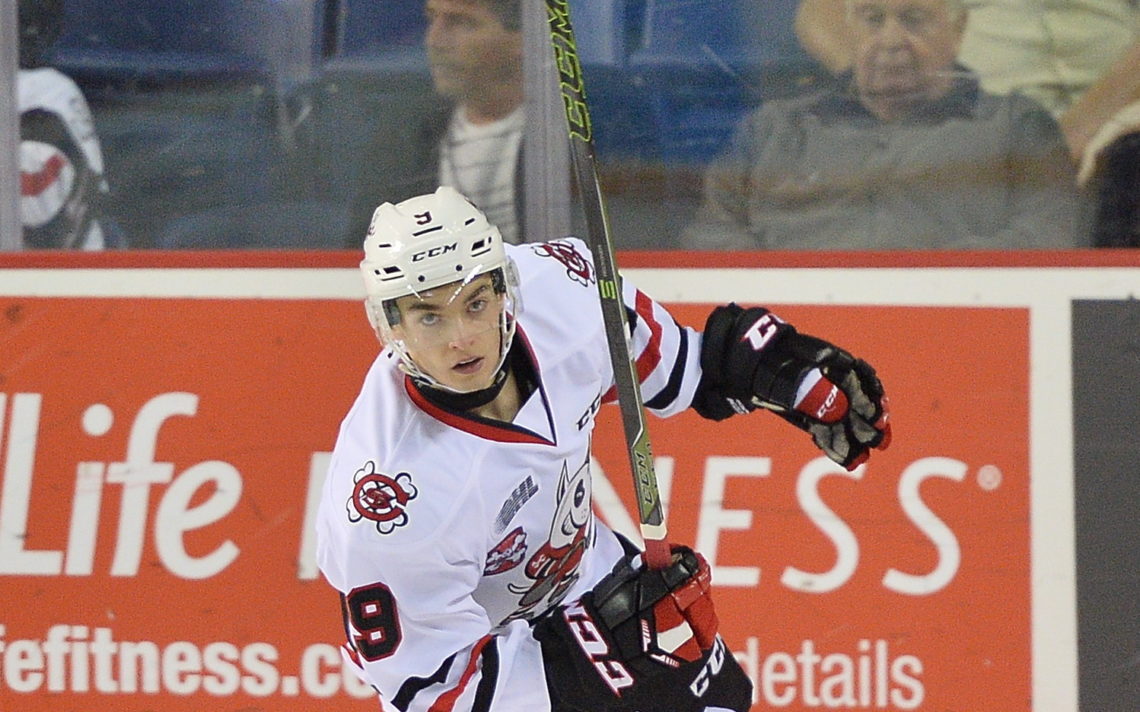 After spending the first month of the season on the sidelines with a shoulder injury, the speedy winger made his debut Thursday a memorable one.

Dame scored a goal and also added an assist as the Niagara IceDogs dropped a 4-3 shootout decision to the Oshawa Generals in an Ontario Hockey League game at the Meridian Centre.

The OT loss leaves Niagara with a 7-2-0-1 record. They have picked up points in seven straight games.

Dame was predictably all smiles when asked about the goal by the press.

“It felt great,” the 19-year-old Mississauga native said. “I’ve been out of the lineup for awhile and it feels good to get back in there and put up some points right away.”

Dame suffered the injury in the final pre-season game in Kitchener when he fell awkwardly into the boards.

He worked hard rehabilitating the injury, then got caught up in a number’s game trying to get back into the lineup.

“It’s definitely tough. I’ve been working hard to practice to get back into the lineup, and now that I’m here, it feels good to produce.”

Dame admitted it was a challenge to get back playing after so much time off.

“Pretty rusty, for sure,” he said. “I’ve been working hard and it definitely paid off.”

“He could have found every excuse in the book not to have a good night tonight but he works hard every day in the gym and on the ice,” Burke said. “I thought he looked great.”

Burke inserted Dame in Bradey Johnson’s spot alongside rookies Philip Tomasino and Andrew Bruder and the line didn’t miss a beat. Bruder netted his second of the season while Tomasino picked up a pair of helpers.

“Whoever it is, that line continues to play well and give us good minutes and chip in offensively, which you don’t really expect,” Burke said. “Full credit to them for probably being our best line.”

Oshawa opened the scoring at the halfway mark of the first when Renars Krastenbergs scored a short-handed goal. About a minute later Bruder banged in a rebound to tie things up at 1-1. Niagara held an 11-8 edge in shots in the period.

The Gens grabbed a 2-1 lead midway through the second before Dame and Danial Singer scored to give Niagara a 3-2 lead. Singer’s goal was a beauty as he tapped in a ice pass from Kyle Langdon to finish off a pretty three-way passing play.

Oshawa scored the lone goal of the third to tie things back up at 3-3. The Gens outshot the IceDogs 32-29 through regulation.

Akil Thomas, Kirill Maksimov and Tomasino were all thwarted in the shootout.

Overall, Burke was satisfied with the effort.

“I thought it was fine,” he said. “I thought we came out and it was going to be our game. I thought maybe we could have blocked a few more shots but I thought we were going to pull that out.

“We’ll take our point and put it in the bank.”

The IceDogs appeared sluggish on their power play, going scoreless in four opportunities with the man advantage.

“I thought they had chances and the half power plays are tough to get a rhythm in,” Burke said. “They are still getting chances. We’re not going to panic with them but that’s why we need to continue to work on our five-on-five game and the power play gets hot again.”

Ice cubes: Jukka Schotter, Ian Martin, Liam Hamm, Drew Hunter and Bradey Johnson did not dress for the IceDogs  . . . Sean Allen, Serron Noel, Joseph Rupoli, Ian Blacker and Mason Kohn were scratched for the Generals  . . . Niagara captain Johnny Corneil took a shot off the hand and did not play in the third period . . . Former IceDog Hayden McCool is scoreless in four games with the Gens.

Up next: Home to Sudbury Saturday and at Mississauga Sunday at 2 p.m.