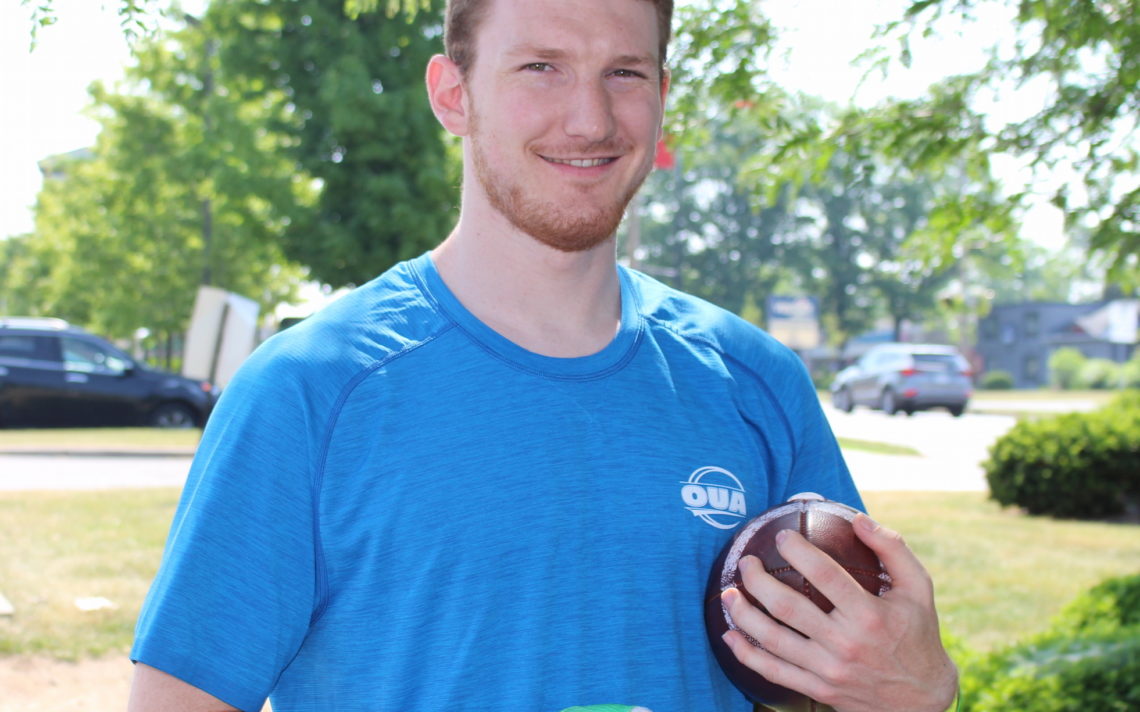 Harry McMaster had a storybook start to his fledgling Canadian Football League career.

In his first play from scrimmage during a May 27 preseason game versus the Saskatchewan Roughriders, the 24-year-old Niagara Falls native caught a 25-yard pass on a broken play and carried the ball down to the Saskatchewan one-yard line.

“They were kind of making fun of me for that, but it was pretty cool,” he said, with a laugh. “I made the catch, I saw three guys in front of me and I made a half-hearted jump to get in the end zone, but it didn’t work out.”

Unfortunately, the Saint Paul graduate’s dream start took a nightmarish turn in the team’s next game, a June 1 preseason tilt versus the Winnipeg Blue Bombers. Just before halftime, the 6-foot-2, 193-pound receiver fell awkwardly after a collision and broke his right thumb.

“It was a nothing play,” the former Niagara Spears player said. “I thought I had jammed it so I played six or seven more plays before the half.”

At halftime, he asked the trainers to tape his thumb because it felt weak and they told him it was broken.

The injury will take about eight weeks to heal and he is back home during the recovery period.

“I will go back if they have a spot for me, but I still have another year of eligibility (of university football) so they would like for me to go back there,” he said. “If not, it will just be back to training camp next year.”

The geography graduate said there is only a small possibility he would return to Western because he feels he has turned the page on his university career, especially after winning a Vanier Cup last fall.

“I think it would be tough to go back.”

McMaster is staying positive despite the injury.

“It’s definitely frustrating because I spend January to April preparing to play in the CFL and then having to spend another two or three months preparing to go back.

“But I am home right now and that is always good. It’s very supportive. I have all my friends here and they have all the confidence in the world in me.”

He also has confidence in himself. In the two weeks he was at the Edmonton camp, he got the sense that he was able to play in the CFL.

“I got some good feedback from the coaches,” he said. “They told me that whatever happens, that I was good enough to play in the league if I wanted to keep doing it.”

McMaster admitted he was a little apprehensive when he first arrived at Edmonton’s camp.

“It was a little intimidating on Day 1 going out with these men, but it was great to be around them for a while and know that it is not out of reach and that it is very doable,” he said. “It was a great feeling.”

McMaster’s CFL odyssey began when he was invited to a CFL regional combine March 9 in Toronto. From there, he was one of six players who received an invitation to the national combine in March 24-25 in Winnipeg.

Draft day was May 3 and he went to a bar with his father (Joe), to watch the first two rounds on television. They then went home to follow the rest of the draft on the internet. He ended up being selected in the seventh round, 53rd overall by Edmonton.

“I got the phone call before the pick came in,” he said. “As soon as I saw the Alberta number on my phone, I knew Edmonton was on the clock.”

Receiving the news from Edmonton Eskimos GM Brock Sunderland was a surreal moment for McMaster.

‘It was a pretty incredible feeling and a lot of things all at once. It was an amazing feeling and I’m not really sure what I said to be honest,” he said. “My brother (Miklos) and I follow a lot of pro drafts and we love that part of pro sports and it was pretty cool to actually be a part of it.”

His agent had told him that he would be selected in the later rounds so he wasn’t anxious when his name wasn’t called until the second to last round.