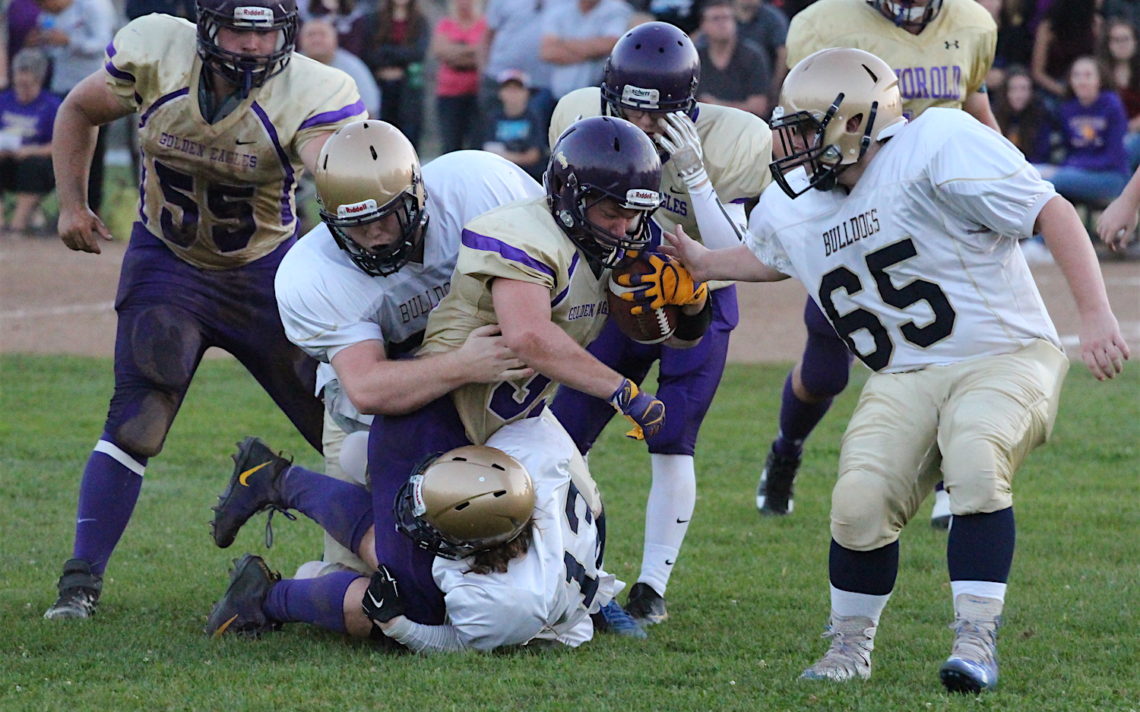 Fighting back tears after the game, the Grade 12 student explained his motivation. He was playing in front of his Thorold football idol Evan Marshall, saluting teammate Anthony Angoy, who welcomed a baby girl into the world two days ago, and playing in memory of teammate Jeremy Badgley’s grandmother, who died this week.

“There’s a guy who’s out here who just lost his grandma so I worked as hard as I could to make them all proud,” the 5-foot-9, 180-pounder said. “I put it on myself to make my team happy and I just wanted the best for everyone else.”

That type of spirit is what has made Thorold a dominant Division 2 football team and will make it a solid squad in their first year of Division 1 play.

“We’re a family and that’s all that matters,” Ferguson said. “We work hard and we stick together.”

Many of the Golden Eagles had the opening game circled on their calendars for months and they delivered in front of a huge crowd on their home field.

“We were ready to play since Day 1 and we’ve been working hard in the summer for this day. We were the underdogs and we had to set the standard,” Ferguson said. “We wanted to win this game more than any other game all season.”

On the other side of the field, the Bulldogs came into the game missing five starters, including their quarterback, but they played like they thought Thorold was going to roll over.

“They thought they were going to come in here and play a great game with what they had,” Churchill coach Peter Perron said. “They thought we could do a job on them and they underestimated them.”

“They didn’t come up to Division 1 because they were weak. We knew they were going to be good.”

And Perron expects the other teams in the league to be just as good.

“This is a very competitive league and there are weak links.”

Thorold certainly showed it was ready to play with the big boys with a school population that is now in excess of 600.

“We’re excited for the challenge and to see where we stand in the realm of high school football in the Niagara region,” Thorold head coach Duane Kemp said.

He expects the season to be a learning curve.

“Each game we will see that the intensity level will be a little higher than what we are used to,” he said. “Playing the Ridgeway-Fort Erie team the last few years before they merged was a good test for us to see what it’s like. It’s going to be a challenge and we will have to make sure the guys are focused and dedicated.”

The players will also have to understand that it will be a process and journey to get where the Golden Eagles want to be.

“We have to learn from every single game,” Kemp said. “Some of the things we got away with last year, teams are going to capitalize on this year.”

The Golden Eagles have had a long run of success at the Division 2 level, including a 19-7 triumph over South Lincoln in last year’s championship game. Over the previous 10 years, Thorold made the final eight times, winning on four occasions.

“We have really committed outside guys who help and we promote it well in the building,” Kemp said. “I think we do an excellent job of getting everyone involved and keep the idea of a family where everyone knows everyone and everyone works together.”

Success has also come from having a large roster of almost 50 players.

“Even when our numbers were low we were getting more than 40 kids,” Kemp said.

The Golden Eagles had excellent timing for a jump to the next level with 15 returning players, including eight to 10 starters.

“This was a good year to come up and try it because we have quite a few 12s and 12Bs kids that we figure will be able to handle themselves against a little better competition.”

Despite a 31-26 loss to the Grimsby Eagles in NRHSAA Division 2 football play Thursday, the St. Catharines Collegiate Saints were pleased with their start.

“We overcame numerous injuries to starters and our depth players, many who were getting their first reps in football, stepped up and played well,” Collegiate coach Nathan Greene said.

Greene liked his team’s play on both sides of the ball.

“The offence was highly effective. We stretched the field vertically with the pass and ran the ball great,” he said. “The defence came up with some big stops and turnovers.

“This was a terrific first game that will be a cornerstone of a season that has championships aspirations.”

Performing well for the Saints were: John Emmorey, 4-7 passing for 116 yards and a TD and 10 rushes for 103 yards and a TD; Chris Ceide, 20 carries for 139 yards and TDs and an interception on defence; Josh Dionne, three catches, including a 60-yard TD grab; Robert Smith, two sacks and six tackles; and, John Hartwell and Abraham Alhatimi, strong games on defence in their first-ever football games.