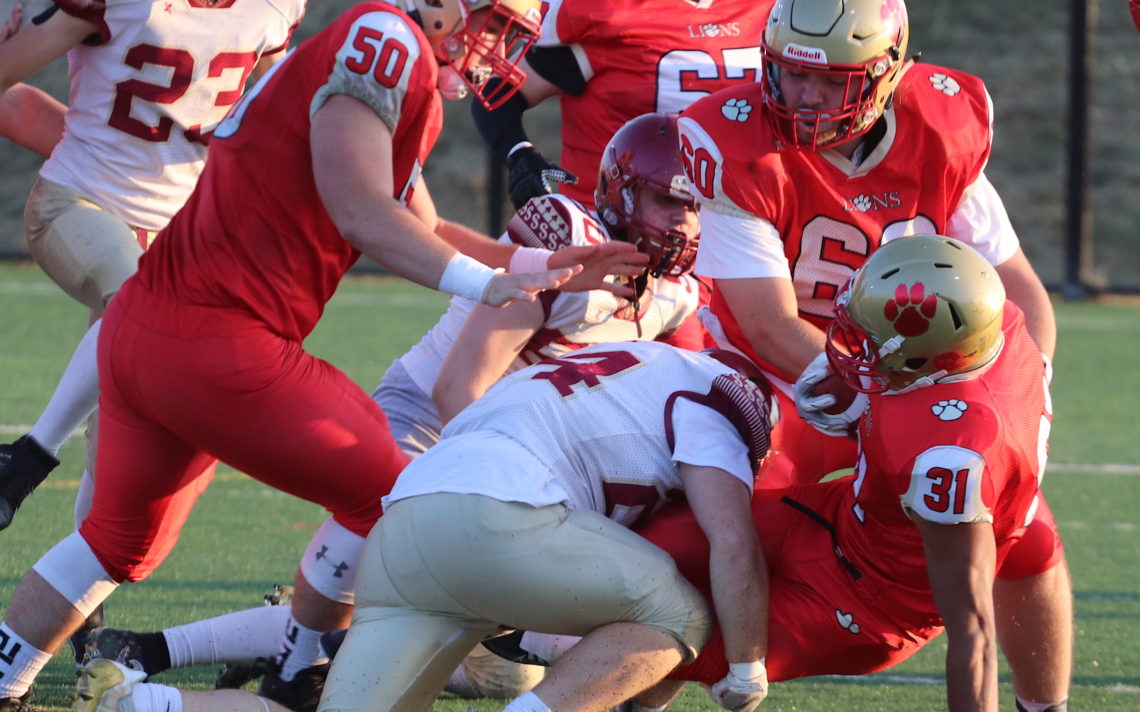 Tyler Soppet hadn’t played football since Grade 7 when he decided to suit up for the Grimsby Eagles last fall.

“I wanted to play a sport for my high school and my friends were telling me to come play football. I fell in love with it,” the 17-year-old said. “I wish I started playing way earlier but I didn’t play mainly because of my size. I thought I wasn’t big enough to play.”

The 5-foot-9 155-pound enjoyed himself so much on the field in the fall that he wanted to keep going.

“It was so much fun and then I decided to play for the Spears,” said Soppet, who is heading into his 12B year at Grimsby this fall. “The high school season was done and I just wanted to play more football. I knew some people on this team so I decided to play.”

It took him awhile to hit his stride with the Spears.

“I didn’t start out that confident because I didn’t know what I was doing but I started learning and after the Hamilton game I became more confident and started playing better,” he said Saturday, after the Spears fell 34-14 in Ontario Summer Football League action to the visiting Cambridge Lions. “After I got two picks against Brantford, I started playing even better.”

“Tyler is a very confident player. He is young but he is very good at what he does. He just needed a little bit of confidence and he is gaining more and more of it every game,” he said. “I love his attitude.”

“He has been a great surprise this year. It is his first year playing senior football since Grade 7 and I didn’t know that at the beginning of the season,” he said. “He has grown into my best defensive player and it has been amazing.”

“He is here every practice and he works hard, he is not scared to go into any position I put him in and he worked hard for it.”

Soppet opened the season on the bench but became a starter halfway through the first game.

“He got his contact courage and once he made his first big hit, he knew he could play with everybody,” Traub said. “He became himself on the field and he just started playing.”

Traub agrees it is rare for someone so green to become such a good player so quickly.

“It is a happy surprise and he is young. I have him for another year after this.”

He quickly realized he had a special player on his hands.

“After I watched the film of the first game, I saw him involved in almost every tackle,” Traub said. “He was either at the tackle making the tackle or around it every single play. It didn’t matter where on the field it was. He was there.”

Soppet knows he still has a lot of work to do.

“I have to keep getting better, keep training and get better all-around. And if I can get faster, I think I can be a well-rounded player.”

Traub agrees with that assessment.

“He needs to get a little more experienced if he plays high school football, get himself in the gym and keep working on his cardio.”

Niagara concluded the regular season 2-4 with the loss.

Duguay pointed to two moments that cost Niagara the game.

“I think we played well. We just can’t give up a touchdown at the very beginning of the game and then again on their first possession of the second half.

“The first score was an 80-yard TD pass on the first play of the game and the second major was a 78-yard TD pass on Cambridge’s first play of the second half. “When you do that, it gives them 14 points and it makes it tough for us. The big plays are killing us. It is the long balls or long runs and we have to stop giving the other teams the momentum.”

The Spears will find out Sunday where and when they open the playoffs.

Up next:  Niagara is in the playoffs next week.