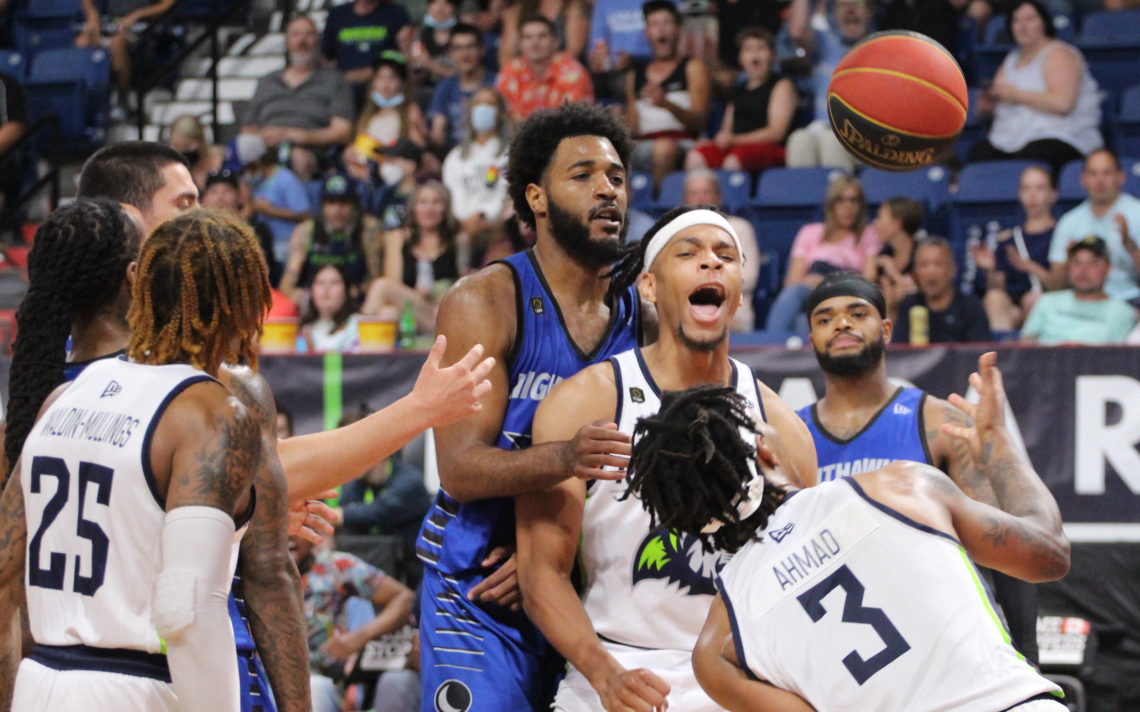 Occeus was signed earlier this week to plug a hole created with EJ Onu temporarily unavailable while he attends NBA Summer League camp with the Memphis Grizzlies and Alonzo Walker injured and not expected back until next weekend.

“Shawn is a phenomenal all-around player. He will easily be one of our top defensive players,” Niagara co-general manager and head of basketball operations Antwi Atuahene said. “We are looking forward to Shawn adding toughness and tenacity to our team.”

Occeus made his Canadian Elite Basketball League debut Wednesday, playing 10 minutes in a victory over Edmonton.

River Lions head coach and co-general manager Victor Raso loves what Occeus brings, both on and off the court.

“He comes from a great school in Northeastern University and has great habits. He’s a great guy and is willing to accept the role that we wanted him to fill,” Raso said.

Raso said Occeus’ willingness to be a role player was crucial in the organization’s decision to sign him.

“That’s everything. Last year we brought in Jaylon Tate at roughly the same time for a four-game stint and instantly he was complaining about minutes and was a problem,” Raso said. “Shawn came in the other night and did a great job. As a professional basketball player to come in and set your ego aside and join a team and just play a role, says a lot about who he is.”

Occeus’ defence is what sets him apart.

“He’s a smart kid. He has good habits. He’s been coached very well. For us, he fit in seamlessly and I think he’s only going to get better.”

Occeus, a 24-year-old native of Florida, has no issues with being a role player.

“I think it’s pretty easy. Being a student of the game, I’ve seen different roles so it was pretty easy for me because it’s something I’ve already done in college,” he said. “This team has already built a culture here and everyone has been so welcoming that’s it’s been easier.”

Occeus said being a good defender starts with hard work.

“Honestly, it’s about effort and knowing your angles and knowing who your matchup is,” he said. “Studying them and watching their tendencies and also executing your coach’s game plan. Those three or four things I think will make anybody a better defensive player.”

Occeus loves to score as well, but gets a bigger kick out of excelling at the other end of the floor.

“It’s more fun for me to block a shot or steal a pass or get a 24-second shot clock violation,” he said. “I take pride in defence, but I also take joy in it. It’s fun to get into an offensive player’s head and know that it’s making it rougher for them on the floor.”

Occeus is good friends with Maxime Boursiquot of the Ottawa BlackJacks — they both attended Northeastern — so he was familiar with the CEBL. He also knows Antonio Davis and played against Elijah Mitrou-Long in the past.

Occeus most recently played for Phoenix Hagen of the German ProA. At Northeastern, he averaged 8.5 points, 2.3 rebounds, 1.5 assists and 1.3 steals over three seasons. Occeus was selected by the Salt Lake City Stars with the seventh pick in the second round of the 2019 NBA G League draft, and later went on to sign his first professional contract with the Rio Grande Valley Vipers.

Occeus netted 11 points in 23 minutes of action Saturday night as the River Lions defeated the visiting Guelph Nighthawks 101-88 before just over 2,000 fans at Meridian Centre.