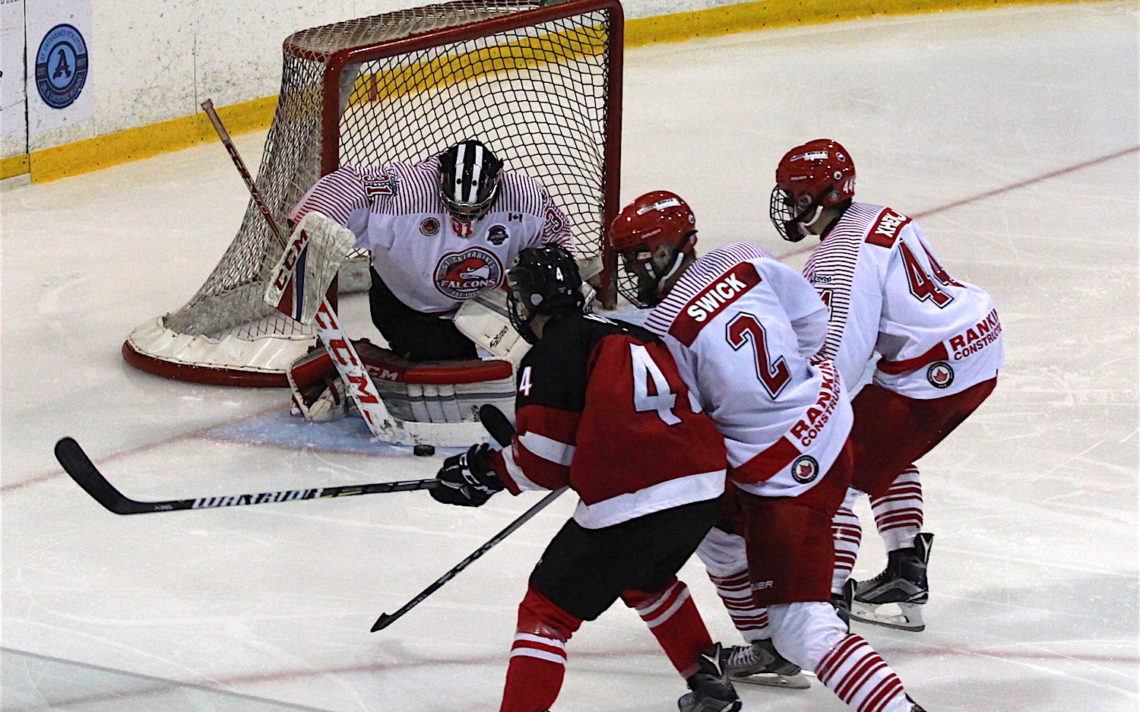 By Bill Potrecz
The Niagara Falls Canucks edged the St. Catharines Falcons 2-1 Tuesday night at Jack Gatecliff Arena. PHOTO BY: BERNIE PUCHALSKI
Tristan deJong has quickly shown himself to be a more than capable defenceman for the
St. Catharines Falcons.
The 17-year-old native of Breslau (near Waterloo) joined the Falcons this season after a year in Cambridge and has more than fit in with his new club.
deJong had a strong game Tuesday as the Falcons dropped a 2-1 decision to the Niagara Falls Canucks in a Greater Ontario Junior Hockey League, Golden Horseshoe Conference game Tuesday at Jack Gatecliff Arena.
The Falcons have lost two of their last three games to fall to 9-4.
The red-hot Canucks have won seven straight after getting off to a slow start and are tied with the Falcons for second place. St. Catharines owns a game in hand.
DeJong joined the Falcons thanks to his relationship with new Falcons coach Dan Fitzgerald, who coached him in Cambridge last season.
“I had a few options in the GOJHL but I felt comfortable with Fitzy,” deJong said. “He kind of took me in on this team. It was kind of an adjustment moving from Waterloo to St. Catharines but he made sure I would be comfortable here and I adapted quick.”
Fitzgerald was thrilled deJong, a 10th round selection of the Barrie Colts in the 2016 Ontario Hockey League Priority Draft, chose to play in St. Catharines.
“It’s hard to find defencemen, let alone exceptional defencemen,” Fitzgerald said. “He was a big get for us. I knew his character and knew what kind of player he was for us. He’s been really good for us and an impact player right away.”
deJong admitted it’s still going to take some time before he feels 100 per cent at home, which is only natural.
“It’s still early in the year and there’s some meshing to do but I think the boys are coming together really quick,” said deJong, who is enrolled at Denis Morris High School. “I wouldn’t say it’s as difficult as we just haven’t been together for a bit.
“We still need to find the right combinations and get everybody moving together.”
deJong has high-end offensive skills but is quick enough play at both ends of the ice.
“He’s really starting to defend properly because in minor hockey he was Mr. Rush all the time,” Fitzgerald said. “We reigned him back last year a lot — maybe too much — and maybe stunted him a little bit but he really has blossomed this year into a 200-foot defenceman.”
The teams played through a fast-paced, scoreless opening period that each each squad have a couple of decent chances to score. Shots were 14-14.
The Falcons opened the scoring just before the halfway point of the second when Matt Busby floated a wrist shot into the top corner from the point on the power play.
The Canucks answered back with a power-play goal of their own two minutes later when Frank Pucci snapped home his ninth of the season to the only other goal of the second.
Niagara Falls grabbed their first lead of the game six minutes into the third when Dillon Hill scored with the man advantage. The Falcons were shorthanded for having too many men on the ice.
Falcons leading scorer Michael Davies did not finish the game after injuring his knee while sniper Tanner Ferreira was absent serving a one-game suspension. Those absences hurt the Falcons down the stretch.
“I thought we had a couple tap-ins and had a couple of really good chances in the first and at the beginning of the second and it kind of petered off towards the end,” Fitzgerald said. “A lot of that had to do being down a couple of guys and being tired and guys playing on lines they aren’t used to being on.”
Falcon facts: Tanner Main, Matt Bauman and Ferreira (suspension) did not dress for the Falcons  . . . Former Falcon and Niagara IceDog Greg Jambrosich, now a member of the Brock Badgers men’s hockey team, was a visitor to the press box  . . . Savory and Falcons assistant coach Andrew Kilcar both celebrate birthdays Wednesday.
Corvairs 5 Regals 0
Michael Greco, Issac Taylor, Bobby Harrison, Sean O’Brien and Cam Allen scored as the visiting Caledonia Corvairs blanked the Buffalo Regals.
Brandon McCorriston made 23 saves for the shutout.
The Regals remain winless at 0-11.
STATS PACK
BPSN Star of the Game: St. Catharines netminder Owen Savory with 32 saves.
For the St. Catharines Falcons: Matt Busby (4).
For the Niagara Falls Canucks: Frank Pucci (9); Dillon Hill (1).
Game stats: Shots on goal: By St. Catharines on Zach Moore (36), by Niagara Falls on Savory (34); Power plays: St. Catharines 1-for-4, Niagara Falls 2-for-6; Penalty minutes: St. Catharines 14, Niagara Falls 10.
Attendance: 353
Up next: The Falcons host Thorold Friday at 7 p.m. The Canucks are home to Welland Friday at 7 p.m.