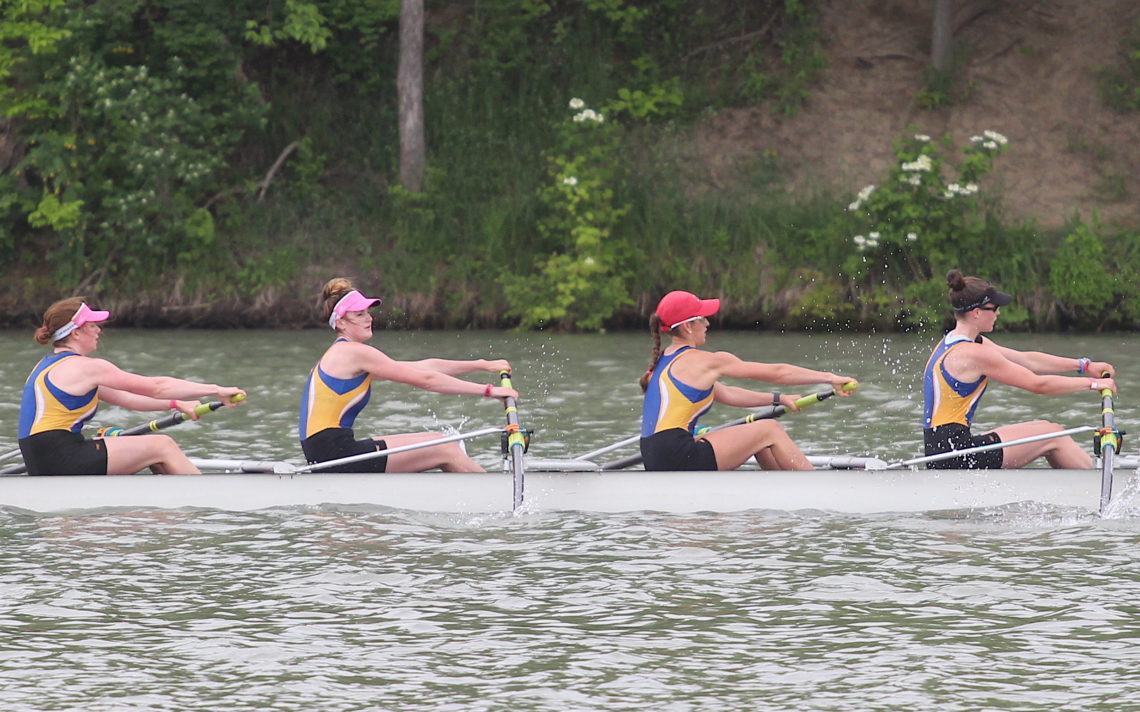 E.L. Crossley has had a lot of great Sundays at the Canadian Secondary Schools Rowing Association championships in St. Catharines.

No previous Sunday was better than the Super Sunday the Fonthill high school put together in this year’s 73rd annual version of the regatta.

Crossley captured a school record 11 CSSRA gold medals and, of the 18 boats that made finals Sunday, 17 of them reached the podium.

“It’s nice to have that kind of turnover that they are not just getting there,” head coach John Ruscitti said. “They are getting there and turning it over into some hardware.”

The school has good athletes and coaches, but the key to the success is a lot of hard work.

“Like Michelangelo said ‘Behind these great frescoes is a whole lot of hard work.’ The kids work hard, the coaches work hard and we promote the philosophy of consistency of effort and attendance,” Ruscitti said. “From the top down, the coaches give it, the kids respond, the families step up and away we go.”

Crossley also made a triumphant return to the senior men’s and women’s eight events, winning both after more than a decade absence in each division.

“It is always fun when you can take the last two races of the day,” Ruscitti said. “We have some great seniors and it is nice to reward them and the whole program.”

The 12B student at E.L. Crossley teamed with Cam Veld Sunday to win gold in the senior men’s 72-kilogram double at the Canadian Secondary Schools Rowing Association championships in St. Catharines. Later in the day, Veld and Rusin were in a Crossley eight that also struck gold to give the 19-year-old Rusin seven Schoolboy gold in his career.

“It’s still pretty special,” said Rusin, who is off to row at the University of Victoria next fall. “Coming here and having to fight for everything means a lot.”

Sunday’s double final was quite the battle.

The Crossley crew led for the majority of the race before a crew from J.F. Ross took a lead of about an inch in the latter stages of the race.

“And then it was just a dogfight in the last 500 metres,” Veld said.

He wasn’t sure how they pulled it out.

“We started our finish early and we just managed to get ahead of them,” Veld said.

For the 16-year-old, it was his first of two Schoolboy golds Sunday. Veld placed second at the Stotesbury Cup with a different Crossley rower before he and Rusin joined forces.

“We did a lot of kilometres throughout this season so we put in a lot of hard work and it just paid off in the end,” Veld said. “And our coach really helps us out with paying attention to our stroke and really giving us good pointers.”

Veld knew the boat would be fast after winning its heat.

“Coming down in the time trials, we were moving pretty good so I think that was the time that we knew we were going to do pretty well,” he said. “Also, there were a lot of time trials to make sure we had the right combination. We were putting up really good numbers.”

“We have a great program that works really well and that is a major contributor to the speed and success,” he said.

The E.L. Crossley senior women’s coxed four that won Schoolboy gold Sunday looked nothing like the boat that placed second at the Mother’s Day Regatta at the start of the season.

“We had a chance to work at it from that point on and we have improved so much with it,” stroke Krista Zucco said. “It was just getting together as a crew, being with each other and learning how everyone else rows.

“That way we could alter things to find a perfect way for us.”

Other members of the crew were cox Brooke Kew, Kora Curtis-Masse, Emma Leavens and Teja Chmay.

Zucco, a Schoolboy gold winner in the junior four in 2017, realized a gold might be possible at this year’s regatta a few days before the event.

“A couple of days before it we had made a few changes and we were working really hard with that to just find a rhythm,” she said. “The heat we had on Friday told me we had this rhythm and I knew we could do it.

After a close race in the semifinal, Crossley had a strong final row.

“We started put somewhere in the middle and we kept hauling it from there,” Zucco said. “Maybe the last quarter of our race we really picked it up and we used that last little push to get us ahead.”

Mayah Speck couldn’t have asked for a better debut at the Schoolboy rowing championships.

Speck coxed E.L. Crossley’s junior men’s coxed four to victory in the second race of the day and then became a double gold winner in the 27th race with the Fonthill high school’s senior women’s 63-kilogram coxed four.

Speck was coxing with the women’s four, made up of Lauren Bench, Peyton Learn, Olivia Bruin and Kayleigh Partridge, for the first time this season.

“We were kind of thrown together at the last minute,” she said. “They have been together for a few weeks and I had never rowed or practised with them before.”

She has loved the experience.

“It has been such a honour rowing with them,” Speck said. “They are amazing girls, they are all senior athletes, and I am a novice cox in Grade 9.”

Speck felt there was a number of reasons why the boat was so fast.

“It’s their power and how they put everything into every stroke,” she said. “They put all the power and energy in and they make every stroke count.”

Speck was delighted to be wearing two CSSRA gold medals in her first Canadian championships.

“I am greatly blessed to be a part of this amazing group.”