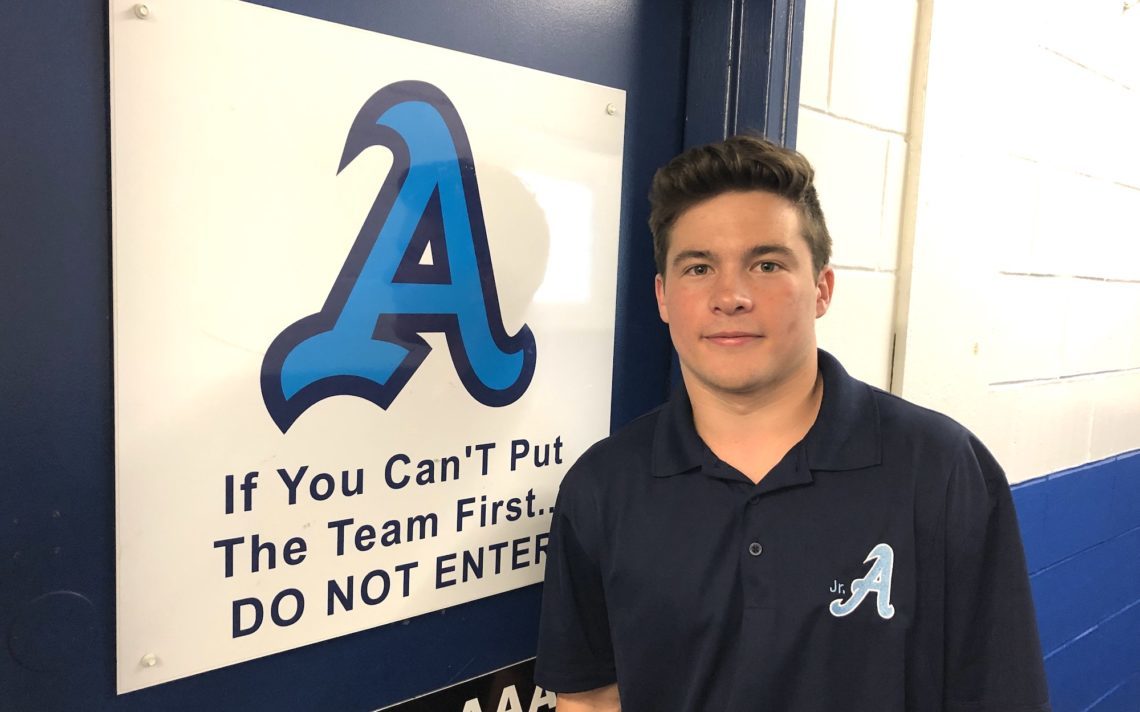 Simmons pumped to be back

“It’s so exciting,” the 22-year-old Smithville resident said. “To be back out with these guys, some of them I haven’t seen for two years, is absolutely phenomenal. I can’t wait to back out there again and be competing again.”

The A’s were slated to host the Minto Cup at the Meridian Centre in St. Catharines last summer, but the 2020 schedule was wiped out by the COVID pandemic.

“It was devastating at first but when we had a chance to come back it was a no brainer,” Simmons added.

“I think we feel a little cheated,” he said. “We had a year where we were supposed to host the Minto Cup and we had a little bit of a thing going and we were the top age group and the best in Ontario and we had a real shot at winning so that’s why we all came back.

“If you’re from St. Catharines or you play for St. Catharines, you’re going to come back. That’s the kind of culture they create here.”

A’s general manager Jeff Chcoski is thrilled to have so many veterans returning.

“I talked to some league officials today and they are super excited to get lacrosse going, even if it’s a three-week tournament. They think it’s going to be a real buzz.”

The A’s take on Kitchener-Waterloo Saturday, July 24 at 3 p.m. in the first game of the three-week tournament. They play Brampton at 7 p.m. later that day, then square off versus Six Nations Sunday, July 25 at 3 p.m. and Oakville at 9 p.m. to conclude the first weekend of play. All games are being played at the Toronto Rock Athletic Centre in Oakville.

“We’re going to prepare for it like a Minto,” Simmons said. “We want to bring the Iroquois Trophy back to St. Catharines. That’s the goal we set when we put the jersey on in 2016.”

The tournament continues Saturday, July 31 when the A’s play Burlington at 1 p.m. and Brampton at 7 p.m. On Sunday, Aug. 1, the A’s conclude with a 3 p.m. game against KW and a 7 p.m. start versus Six Nations.

Mimico, Orangeville, Peterborough, Toronto and Whitby will play each other in the East Division while St. Catharines, Brampton, Burlington, Kitchener-Waterloo, Oakville and Six Nationals comprise the West Division.

Simmons is well aware it will be a war of attrition with so many games in such a short span of time.

“We may have to go through some adversity, but we’re all really excited.”

Simmons, who is slated to go back to the University of Denver for his senior year this fall, is expected to be a top choice in the National Lacrosse League draft in September.

“It’s not too far (away) to think about. It’s obviously exciting coming up but right now my mindset is with the A’s,” he said.

The A’s will continue practice this week and plan to have their roster down to 43 (23 for main roster, 20 for young guns squad) Friday.

“We will have a full week of practice Tuesday and Thursday with full team and then be ready to go for the weekend,” Chcoski said.