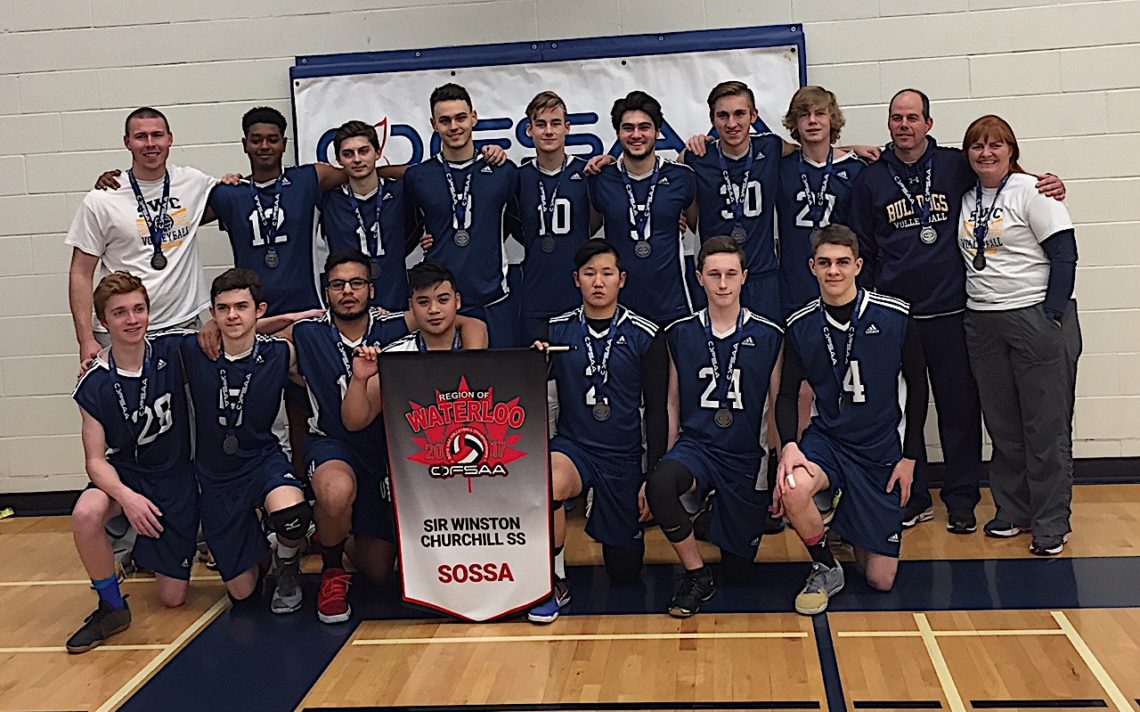 The Sir Winston Churchill Bulldogs came home with a lot more than they bargained for at the Ontario Federation of School Athletic Associations (OFSAA) boys AAA volleyball championship in Waterloo.

The Bulldogs made it to the championship final where they earned a silver medal after dropping a 13-25, 27-25, 25-15, 18-25 decision to Mississauga Secondary School.

“We went in ranked 10th,” Churchill coach Brent Mergl said. “Our team goal was to get to OFSAA. Once we made it and saw our ranking, then the whole goal was to try and come second in our pool and get to the championship side of the tournament. “We’re a better team than just consolation. Once you get to the championship side you never know. On any given day anybody can beat anybody. You just don’t know what’s going to happen in a tournament format.”

The Bulldogs advanced to the championship quarter-finals after being declared the winner following a three-way tie for second in their pool.

Churchill then took on fifth-ranked St. Jean de Brebeuf of Hamilton, a team they had previously lost to in tournament play.

“We went up 2-0 and felt like we were going to win,” Mergl said. “They seemed tentative and playing not to lose. Our whole motto once we got to the quarters was to play to win and not hold anything back.”

That win assured the Bulldogs of a medal.

“The kids were ecstatic. All they talked about was they were going to get a medal. They were just happy to get a medal,” Mergl said.

There was more drama in the semifinals where the Bulldogs fell behind 2-0 to No. 6-ranked St. Marcellinus of Mississauga.

“I said to the kids you’ve been resilient all year. We’ve battled injuries and we were down 2-0 at SOSSA and came back and won the next three. Why can’t that happen now? Why not us? Why can’t we be that Cinderella story?”

The Bulldogs got on a roll and won the next two sets before taking the third and deciding set 15-11.

It was a comeback Mergl will remember for a long time.

“The elation and emotion they let go was just great,” he said. “I thought SOSSA was one of our better matches and comebacks of all time but this one beat that. It was unbelievable.”

But the comeback also took its toll on the team, who were physically and emotionally exhausted.

“I think the boys were so satisfied being there we kind of ran out gas. We ran out of emotion to keep pushing and fighting.”

Mergl sees only good things in the future for Sir Winston volleyball.

“We’ve got a lot of momentum going at our school now with volleyball. The success of junior boys and our junior girls last year went undefeated and won SOSSA so we’re just going to keep running with it. It’s just snowballing.”

The team is coached by Mergl, Garrett Goodbrand and Tammy Short.